Screen Shot 2014 10 27 at 14 05 03. Wefts. CTPA - Key facts. Key Facts about the Cosmetics Industry Historical use of cosmetics Cosmetic products have been in existence for thousands of years – In 400 BC, Greek Olympic athletes covered their bodies with a ‘sunscreen’ mixture of sand and oil to protect their skin from the sun! 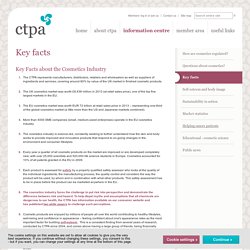 Meet your Charming Beauty: black. The never-ending quest for the perfect beauty solution has arrived. 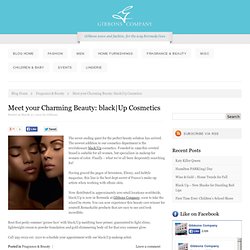 The newest addition to our cosmetics department is the revolutionary black|Up cosmetics. Founded in 1999 this coveted brand is suitable for all women, but specializes in makeup for women of color. Finally – what we’ve all been desperately searching for! Having graced the pages of Seventeen, Ebony, and InStyle magazine, this line is the best-kept secret of France’s make-up artists when working with ethnic skin. Now distributed in approximately 200 retail locations worldwide, black|Up is now in Bermuda at Gibbons Company, soon to take the island by storm.

Beat that pesky summer ‘grease face’ with black|Up matifying base primer; guaranteed to fight shine, lightweight cream to powder foundation and gold shimmering body oil for that sexy summer glow. Nothing like beautiful black women - Page 9. The "Most Perfect Celebrity" Looks Like a Frankenzombie From Tina Fey's Nightmare. Honestly, the whole idea of this poll kind of reminds me of that Season 2 episode of Buffy the Vampire Slayer where this kid is somehow able to resurrect his dead brother, then decides that since his brother looks all decomposed and gross, he needs to build him a hot zombie bride and starts to eye all the girls he goes to high school with to try and figure out what body parts he wants to use from who. 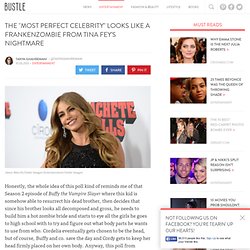 Cordelia eventually gets chosen to be the head, but of course, Buffy and co. save the day and Cordy gets to keep her head firmly placed on her own body. Anyway, this poll from Hollyscoop is kind of like that in the sense that the site asked people to choose their favorite body part from a bunch of different celebs to create the so-called “most perfect celebrity,” then they actually went ahead and posted a mock up image of how this woman would look if she was real.

Is the Fashion World Finally Embracing Diversity? Every so often, a fresh cohort of models arrives and announces a new moment. 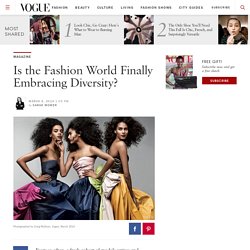 One of the happiest sights of fashion in 2014: Grace Mahary, Imaan Hammam, and Cindy Bruna (pictured here). With their multinational, multiethnic backgrounds—not to mention their cheekbones, upswept eyes, and long, beautiful limbs—they’re leading the sort of epochal shift that makes editors fight, designers throw money, and agents scramble. At long last, the “white-out” years that have chilled the heart of the industry appear to be on the way out. TOWIE's Chloe Sims shows off the results of her £4,500 butt lift. By Sarah Bull Published: 10:20 GMT, 10 April 2012 | Updated: 08:31 GMT, 11 April 2012 She previously admitted she felt incredibly insecure about her 'flat granny bum'. 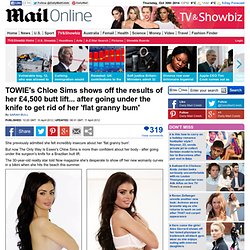 But now The Only Way Is Essex's Chloe Sims is more than confident about her body - after going under the surgeon's knife for a Brazilian butt lift. The 30-year-old reality star told Now magazine she's desperate to show off her new womanly curves in a bikini when she hits the beach this summer. VICTORIA'S SECRET SHOW 2013 - Resident Luxe. Some of my favourites from past years… My favourite time of year has rolled around again…and let me tell you its not Christmas. 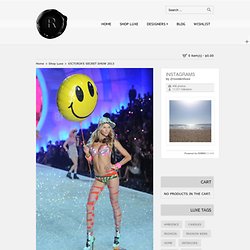 One hell of a party kicked off last week in NYC at the 2013 Victoria’s Secret Fashion Show – A sensory overload of music, colour and costumes…oh and ridiculously good looking models. When I shared my squeal-like excitement to a friend of mine recently, she said “Oh that makes me depressed”, but I have to disagree entirely. I feel empowered when I watch the shows, it’s the most amazing collaboration of creatives who are at the top of the industry – Incredibly talented costume & fashion designers who work for over 12 months to make the costumes, happy energetic models, amazing musicians, set design, props and colour, colour, colour. For me its not about comparing myself to these beyond stunning models its the spectacle of the show. FARFESH - نعومي كامبل لن تسكت على تراجع عدد العارضات السمراوات.

Buttock Augmentation Plastic Surgery Miami. Lauren Goodger has a new pout after getting her lips done with permanent make up. We knew that Lauren Goodger has been gradually, er, improving her face over the last two years, but we didn't realise quite how much it's changed since she started TOWIE. 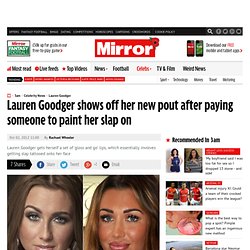 Before she started appearing on the telly, Lauren had thinner, lighter lips, a slight bend in her nose and a normal coloured face. Two years on and the reality star has straightened out her nose, had her eyebrows darkened and dyed her face orange. And, yesterday, she went and had her lips done too. Lauren tweeted the above snap of her massive new pout, along with the message: 'I've joined the gang and had the gloss and go lips'.