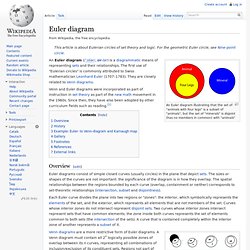 Since then, they have also been adopted by other curriculum fields such as reading.[1] Overview[edit] Examples of small Venn diagrams(on left) with shaded regions representing empty sets, showing how they can be easily transformed into equivalent Euler diagrams (right). Venn diagrams are a more restrictive form of Euler diagrams. Woman launches vicious headbutt attack on fellow shopper 'for refusing to wear a mask' in shop. Woman is caught on camera HEADBUTTING a fellow shopper 'who refused to wear a mask' to enter shop in London A woman headbutts, punches, kicks and drags another by the hair in the attackThe incident broke out at a Whitechapel petrol station and Co-op on Thursday The violent fight and abusive shouting match goes on for more than a minuteAn onlooker urges the shop's staff to 'fire its security' after guard does nothing By MailOnline Reporter Published: 06:19 EDT, 17 October 2020 | Updated: 04:16 EDT, 18 October 2020. 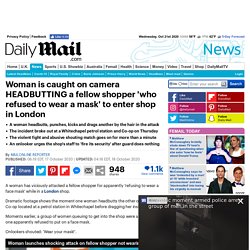 NPR Choice page. You Must Be Very Intelligent: The PhD Delusion: Amazon.co.uk: Bodewits, Karin: 9783319593203: Books. I was born April, 1983, in a small village in the economically dead North East of the Netherlands. 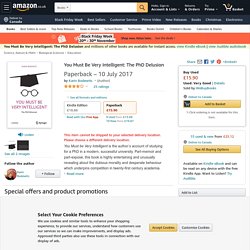 As a child I mainly caught frogs and leapt over ditches. When life became meaningful (though not necessarily better), I dreamt about travelling the world as a field biologist.

Property. Authors to Read. Public Sector. VWData. WIG CEO Blog December 2019 – Artificial Intelligence: the future is collaborative. AI - the future is collaborative The number of interpretations of what has become known as Artificial Intelligence (AI) is only matched by the exaggerated claims of what it will provide or the havoc it could wreak, depending on your point of view. 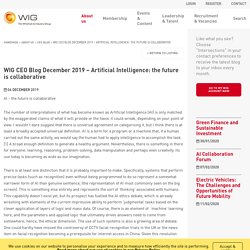 I wouldn’t dare suggest that there is universal agreement on categorising it, but I think there is at least a broadly accepted universal definition. AI is a term for a program or a machine that, if a human carried out the same activity, we would say the human had to apply intelligence to accomplish the task. [1] A broad enough definition to generate a healthy argument. Nevertheless, there is something in there for everyone: learning, reasoning, problem-solving, data manipulation and perhaps even creativity. The Secrets of Group Dynamics. This seminar is a must if you are interested in raising your awareness of what really goes on when more than two people are communicating. 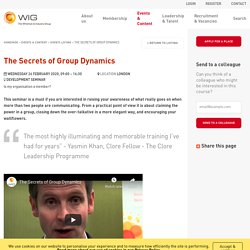 From a practical point of view it is about claiming the power in a group, closing down the over-talkative in a more elegant way, and encouraging your wallflowers. The most highly illuminating and memorable training I’ve had for years” - Yasmin Khan, Clore Fellow - The Clore Leadership Programme. Prostate Cancer Research Institute (PCRI) Testicular cancer. Testicular cancer is cancer that develops in the testicles, a part of the male reproductive system. 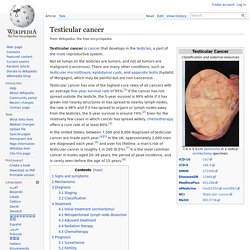 Not all lumps on the testicles are tumors, and not all tumors are malignant (cancerous). There are many other conditions, such as testicular microlithiasis, epididymal cysts, and appendix testis (hydatid of Morgagni), which may be painful but are non-cancerous. Testicular cancer has one of the highest cure rates of all cancers with an average five-year survival rate of 95%.[1] If the cancer has not spread outside the testicle, the 5-year survival is 99% while if it has grown into nearby structures or has spread to nearby lymph nodes, the rate is 96% and if it has spread to organs or lymph nodes away from the testicles, the 5-year survival is around 74%.[2] Even for the relatively few cases in which cancer has spread widely, chemotherapy offers a cure rate of at least 80%.[3]

Directory of Social Research Organisations in the United Kingdom. Relentless: From Good to Great to Unstoppable. I really, really disliked this book. 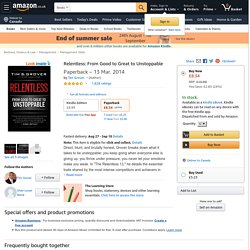 It was frustrating and creepy at times in my opinion, but it was assigned reading so I did have to finish it. I’m not the type of person that enjoys self-help books; I think the majority are either too cheesy or too self-righteous. “Relentless: From Good to Great to Unstoppable” was the latter. The author is very full of himself, and it comes through in every page. Tim Grover loves to constantly mention all of the famous athletes that he has coached, which is fine to an extent, but it got to the point where it felt like name dropping. 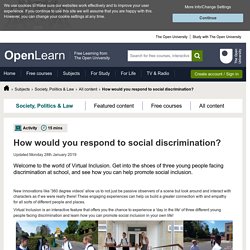 Are you a focused driver? Russell L. Ackoff. Russell Lincoln Ackoff (February 12, 1919 – October 29, 2009) was an American organizational theorist, consultant, and Anheuser-Busch Professor Emeritus of Management Science at the Wharton School, University of Pennsylvania.

Ackoff was a pioneer in the field of operations research, systems thinking and management science. 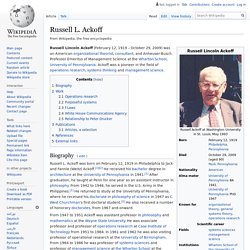 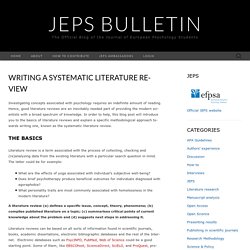 Hence, good literature reviews are an inevitably needed part of providing the modern scientists with a broad spectrum of knowledge. In order to help, this blog post will introduce you to the basics of literature reviews and explain a specific methodological approach towards writing one, known as the systematic literature review. Literature review is a term associated with the process of collecting, checking and (re)analysing data from the existing literature with a particular search question in mind. Who is your customer. WorldWideScience. Whitewashing (censorship) To sanitize and change hiding undesirable qualities In the 20th century, many dictatorships and authoritarian states, as well as democratic countries, have used the method of whitewash in order to glorify the results of war. For instance, during the Soviet invasion of Czechoslovakia following the Prague Spring of 1968, the Press Group of Soviet Journalists released a collection of "facts, documents, press reports and eye-witness accounts.

" Western journalists promptly nicknamed it as "The White Book", both for its white cover and its attempts to whitewash the invasion by creating the impression that the Warsaw Pact countries had the right and duty to invade. Moore's law. Moore's law is the observation that, over the history of computing hardware, the number of transistors on integrated circuits doubles approximately every two years.

The law is named after Intel co-founder Gordon E. Moore, who described the trend in his 1965 paper.[1][2][3] His prediction has proven to be accurate, in part because the law is now used in the semiconductor industry to guide long-term planning and to set targets for research and development.[4] The capabilities of many digital electronic devices are strongly linked to Moore's law: processing speed, memory capacity, sensors and even the number and size of pixels in digital cameras.[5] All of these are improving at roughly exponential rates as well. PEST analysis. PEST analysis (political, economic, socio-cultural and technological) describes a framework of macro-environmental factors used in the environmental scanning component of strategic management. It is part of an external analysis when conducting a strategic analysis or doing market research, and gives an overview of the different macro-environmental factors to be taken into consideration. It is a strategic tool for understanding market growth or decline, business position, potential and direction for operations.

Variants that build on the PEST framework include: PESTEL or PESTLE, which adds legal and environmental factors. Haynes Manual. The Haynes Owner's Workshop Manuals (commonly known as simply Haynes Manuals) are a series of practical manuals from the British publisher Haynes Publishing Group. The series primarily focuses upon the maintenance and repair of automotive vehicles, covering a wide range of makes and models (300 models of car and 130 models of motorcycle); the manuals are aimed mainly at DIY enthusiasts rather than professional garage mechanics, as they lack the depth of coverage on particular vehicles or problems. The series includes a range of 'practical lifestyle' manuals in the same style for a range of topics, including domestic appliances and personal computers, digital photography, model railways, sport, animal care, men,[1] babies,[2] sex,[3] and women.[4] They also now publish the iconic Bluffer's Guides collection[5].

The Green Guide. Hikikomori. Mentimeter. Research Paper: how to. What is a PhD in Management Research Problem? Government Social Research Profession. Writing improvement for young and early career scientists.

Science Snack: "The overall aim of ClimateSnack is to improve the writing skills of young and early career scientists around the world. By improving our story-telling skills we hope to improve our scientific writing. We hope to write better scientific articles where the message is clear and concise." Open to Climate, Earth, Health, Biology, Chemistry, Physics and Society based topics. – raviii

I really enjoyed listening to the speaker and learned something today"? It doesn't happen often enough, because most people who present give mediocre talks at best. But it shouldn't be like this. Presenting information or data, whether it be one on one to your boss, or at an international conference to an audience of thousands, is very much part of modern business and academic life. But such occasions are feared by most people, and even people who are outwardly confident in their work can fall apart at the podium and give the most mediocre presentations simply through anxiety, nervousness and lack of preparation.

We have all watched great presenters in action and envied their talent for public speaking wishing we could do the same. In Easy Steps.