Mark Zuckerberg, Yuri Milner and Stephen Hawking Plan $100M Search For Aliens On Proxima B. Trending News: $100M Project Sets Sights On Aliens Living On That Earth-Like Planet Why Is This Important? 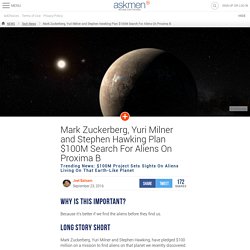 Because it's better if we find the aliens before they find us. EXCLUSIVE: The killer asteroids NASA says are heading towards Earth ON HALLOWEEN. The US space agency has admitted it is discovering about 30 new "near earth objects" a week, and keeping a close watch on them as they cosmically brush past us. 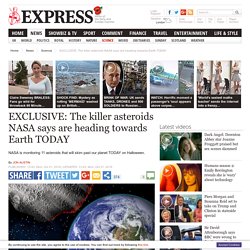 Seven of the Halloween asteroids were discovered only this year, meaning we have been oblivious to them hurtling past us over thousands of years. Three of the space rocks are monsters of between 660 metres and 900 metres in length, big enough to wipe out life in much of a continent if they made a direct hit. Three others, from 230 to 410 metres long, would be likely to be disastrous to a whole country should they strike, with the remaining five, from just 18 metres to 110 metres, big enough to destroy or seriously affect a city the size of London. The closes pass on Monday will be the newly discovered asteroid 2016 UR36, which NASA estimates is between eight and 18 metres long. WSO Oct 27 - Did NSW (New South Wales) Sub Capture Nibiru? NASA and the Media Admit NIBIRU is Coming! 2016-2017.