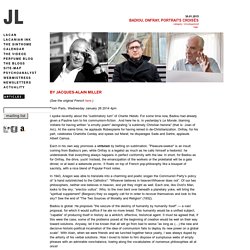 From Paris, Wednesday January 28 2014 4pm. The metaphysics of logic. Interview by Richard Marshall. 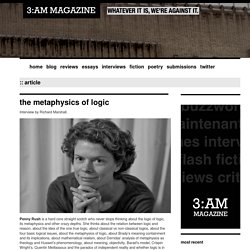 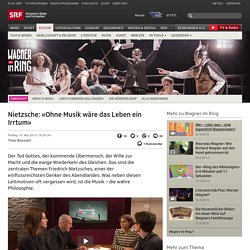 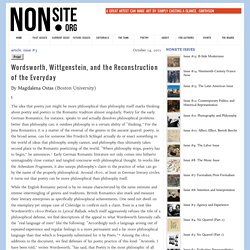 Poetry for the early German Romantics, for instance, speaks to and actually dissolves philosophical problems better than philosophy can; it outdoes philosophy in a certain ability of “thinking.” For the Jena Romantics, it is a matter of the reversal of the genres in the ancient quarrel: poetry, in the broad sense, can for someone like Friedrich Schlegel actually do or enact something in the world of ideas that philosophy simply cannot, and philosophy thus ultimately takes second place to the Romantic poeticizing of the world.

Wittgenstein's Ladder: Introduction. Ludwig Wittgenstein, Culture and Value (1) In the autumn of 1939, Ludwig Wittgenstein and his young Cambridge student and friend Norman Malcolm were walking along the river when they saw a newspaper vendor's sign announcing that the Germans had accused the British government of instigating a recent attempt to assassinate Hitler. 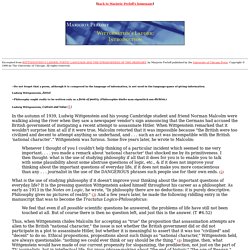 LiterallyAnscombe comments on Isaac Asimov on Socrates. Overview for LiterallyAnscombe. Wonder and the Ends of Inquiry. Science and wonder have a long and ambivalent relationship. 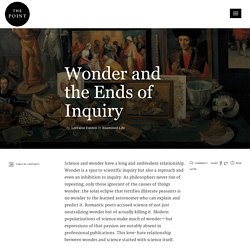 Wonder is a spur to scientific inquiry but also a reproach and even an inhibition to inquiry. As philosophers never tire of repeating, only those ignorant of the causes of things wonder: the solar eclipse that terrifies illiterate peasants is no wonder to the learned astronomer who can explain and predict it. Romantic poets accused science of not just neutralizing wonder but of actually killing it. Modern popularizations of science make much of wonder—but expressions of that passion are notably absent in professional publications. This love-hate relationship between wonder and science started with science itself. Wonder always comes at the beginning of inquiry. Φ-Phi vrs ORCH-OR: As Above, So Below. Towards a Science of Consciousness Conference, Tuscon, April 2014. Space Time Foam φ-Phi by Giulio Tononi: Evoking the paradigm as a key Synergy behind Human Consciousness, explicitly on Page 164. 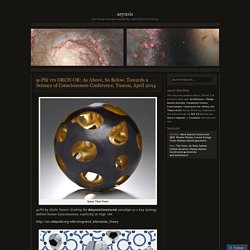 Integrated, Irreducuble, Infinite Seeking a “middle path” between the Orch OR & Phi-IIT positions by exploring their common optimal, analogical geometries. Immanence and Deterritorialization: The Philosophy of Gilles Deleuze and Félix Guattari. 1. 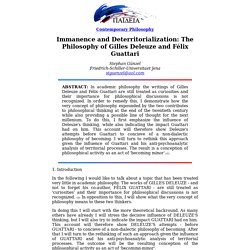 Introduction. Watch: Deleuze and Guattari’s ‘Rhizome’ Explained. Nietzsche on Love. Articles Willow Verkerk considers what Nietzsche has to teach us about love. 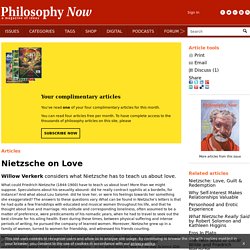 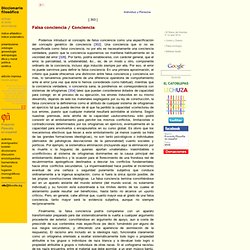 Giqtm3. “Could a Quantum Computer Have Subjective Experience?” Author’s Note: Below is the prepared version of a talk that I gave two weeks ago at the workshop Quantum Foundations of a Classical Universe, which was held at IBM’s TJ Watson Research Center in Yorktown Heights, NY. My talk is for entertainment purposes only; it should not be taken seriously by anyone. If you reply in a way that makes clear you did take it seriously (“I’m shocked and outraged that someone who dares to call himself a scientist would … [blah blah]“), I will log your IP address, hunt you down at night, and force you to put forward an account of consciousness and decoherence that deals with all the paradoxes discussed below—and then reply at length to all criticisms of your account. Wittgenstein’s forgotten lesson. Ludwig Wittgenstein is regarded by many, including myself, as the greatest philosopher of this century.

His two great works, Tractatus Logico-Philosophicus (1921) and Philosophical Investigations (published posthumously in 1953) have done much to shape subsequent developments in philosophy, especially in the analytic tradition. His charismatic personality has fascinated artists, playwrights, poets, novelists, musicians and even movie-makers, so that his fame has spread far beyond the confines of academic life. And yet in a sense Wittgenstein’s thought has made very little impression on the intellectual life of this century. As he himself realised, his style of thinking is at odds with the style that dominates our present era. Prof. Daniel Kahneman: "Thinking, Fast and Slow" David Hume (1711–1776): Themes, Arguments, and Ideas. The Uncertainty of Causation Hume observes that while we may perceive two events that seem to occur in conjunction, there is no way for us to know the nature of their connection. Based on this observation, Hume argues against the very concept of causation, or cause and effect.

String theory wrapup. Turn Down for What? In imagining a homogenized future labor force, accelerationism ignores how capital opportunistically sustains difference to survive Communists are not supposed to like capitalism. Computing Machinery and Intelligence A.M. Turing. Is “Do What You Love” Elitist? Nebula.wsimg.com/7f3511e038c28f957e366ef4ddd99647?AccessKeyId=A9004B8B795F6CE7B9FA&disposition=0&alloworigin=1. Zizek - En su insolente mirada. In Defense of Sanity: The Best Essays of G.K. Chesterton - Gilbert Keith Chesterton.

G.K. Nietzsche lecture by Prof. Raymond Geuss 1/7. On the context of Marx's 'I am not a Marxist' quote. On the context of Marx's 'I am not a Marxist' quote. As far as I know, the MIA cites it as opposing Guesde on the matter of the economic section of the program for the French Workers' Party (the section was written by Guesde, and mainly, though not entirely, approved of by Marx). I'm not a marxist? Invaders from Marx: on the uses of Marxian theory, and the difficulties of a contemporary reading - Michael Heinrich. The following text is the slightly reworked version of an article which appeared on 21 September 2005 in “Jungle World”, a leftist German weekly newspaper. Philosophize This! Papers/apriori.pdf. Aedesia. Notes[edit] References[edit] Hit the road, philosophy. Philosophers need to follow Socrates’ example and get back among the people, say John Kaag and David O’Hara.