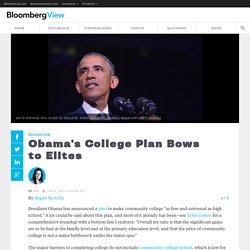 " A lot could be said about this plan, and most of it already has been--see Tyler Cowen for a comprehensive roundup with a bottom line I endorse: "Overall my take is that the significant gains are to be had at the family level and at the primary education level, and that the price of community college is not a major bottleneck under the status quo. " The major barriers to completing college do not include community-college tuition, which is low for everyone, and basically free for low-income families (you automatically qualify for a Pell Grant if your family income is less than $24,000 a year, and many others qualify above that line). Libby Nelson offers the wan defense that universal programs may enjoy greater support than those targeted at the poor, which would be more compelling if community college weren't already basically free for low-income families.

In some cases, obviously. The Tyranny of the Bookish. Photo credit: Shutterstock It is now nearly a hundred years since H.G. 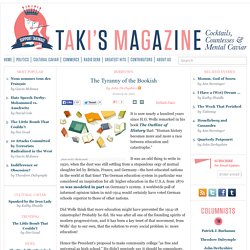 Wells remarked in his book The Outline of History that: “Human history becomes more and more a race between education and catastrophe.” It was an odd thing to write in 1920, when the dust was still settling from a stupendous orgy of mutual slaughter led by Britain, France, and Germany—the best-educated nations in the world at that time! The German education system in particular was considered an inspiration for all: higher education in the U.S.A. from 1870 on was modeled in part on Germany’s system. A worldwide poll of informed opinion taken in mid-1914 would certainly have voted German schools superior to those of other nations.

Did Wells think that more education might have prevented the 1914-18 catastrophe? Hence the President’s proposal to make community college “as free and universal as high school.” “Great numbers of citizens, including many intelligent ones, have zero appetite for book-learning.” Top 5 liberal lies disguised as math. EVIL. Barbie: "Math class is tough. 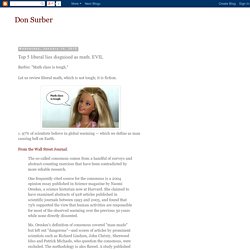 " Let us review liberal math, which is not tough; it is fiction. 1. 97% of scientists believe in global warming -- which we define as man causing hell on Earth. From the Wall Street Journal: The so-called consensus comes from a handful of surveys and abstract-counting exercises that have been contradicted by more reliable research. One frequently cited source for the consensus is a 2004 opinion essay published in Science magazine by Naomi Oreskes, a science historian now at Harvard. Ms. So 75% is 97% -- if you ignore other reports altogether. 2. 1 in 5 college women is raped. From the Baltimore Sun: Let's look at some facts. According to the FBI "[t]he rate of forcible rapes in 2012 was estimated at 52.9 per 100,000 female inhabitants. " Assuming that all American women are uniformly at risk, this means the average American woman has a 0.0529 percent chance of being raped each year, or a 99.9471 percent chance of not being raped each year. 3. 4. 5.

Feminism As a Mating Strategy Among Beta Males. First they came for the male feminists, and no one spoke out—because no one likes them, not even the female feminists. 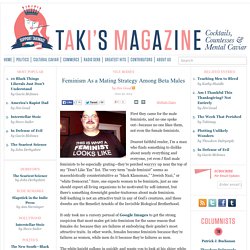 Dearest faithful reader, I’m a man who finds something to dislike about nearly everything and everyone, yet even I find male feminists to be especially grating—they’re perched wayyyy up near the top of my “Don’t Like ’Em” list. The very term “male feminist” seems as masochistically counterintuitive as “black Klansman,” “Jewish Nazi,” or “white Democrat.” Sure, one expects women to be feminists, just as one should expect all living organisms to be motivated by self-interest, but there’s something downright gender-traitorous about male feminism. Self-loathing is not an attractive trait in any of God’s creatures, and these dweebs are the Benedict Arnolds of the Invisible Biological Brotherhood. Why go to college at all? « Hot Air Headlines. Buying an education or buying a brand? It's reported that student debt in the USA is approaching a trillion dollars, five times what it was ten years ago. 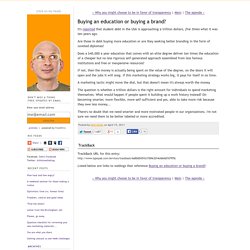 Are those in debt buying more education or are they seeking better branding in the form of coveted diplomas? Does a $40,000 a year education that comes with an elite degree deliver ten times the education of a cheaper but no less rigorous self-generated approach assembled from less famous institutions and free or inexpensive resources? If not, then the money is actually being spent on the value of the degree, on the doors it will open and the jobs it will snag. If this marketing strategy works big, it pays for itself in no time.

A marketing tactic might move the dial, but that doesn't mean it's always worth the money. The question is whether a trillion dollars is the right amount for individuals to spend marketing themselves. Five Feet of Fury – Kathy Shaidle – College is a waste of time and money. Drop out. Five Feet of Fury – Kathy Shaidle – Facebook thread: MBAs wonder why so many MBAs can’t find jobs.