Which is the Right Cross-platform App Development Tools?

Using Cross-platform app development tools developers can build faster mobile apps for your organization irrelevant of any mobile device type. Check out the below links which will helps you in selecting right tools for your company.

Forbes Welcome. Pros and Cons of the Top 5 Cross-Platform Tools. As the market temperature for cross-platform tools (CPTs) continues its steep climb into hotter territory, it’s understandable why many feel we are witnessing a mobile fragmentation that is perhaps much larger and more significant than the recent wars waged over the desktop. 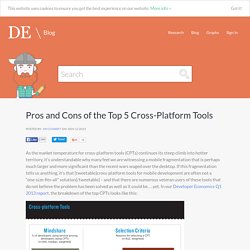 If this fragmentation tells us anything, it’s that [tweetable]cross-platform tools for mobile development are often not a “one-size-fits-all” solution[/tweetable] – and that there are numerous veteran users of these tools that do not believe the problem has been solved as well as it could be….yet. In our Developer Economics Q1 2013 report, the breakdown of the top CPTs looks like this: 23 best mobile app building platforms and tools 2016. Cross-Platform Framework Comparison: Xamarin vs Titanium vs PhoneGap - Optimus Information Inc. Xamarin vs Ionic: A Mobile, Cross Platform, Shootout - CodeProject. Ever faced with choosing among competing frameworks; needing to make a decision you/your customer won't regret? 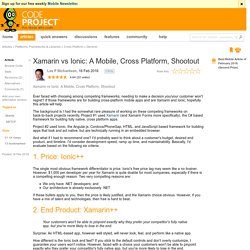 If those frameworks are for building cross-platform mobile apps and are Xamarin and Ionic, hopefully this article will help. The background is I had the somewhat rare pleasure of working on these competing frameworks on back-to-back projects recently. Project #1 used Xamarin (and Xamarin Forms more specifically), the C# based framework for building fully native, cross platform apps. Project #2 used Ionic, the Angular.js, Cordova/PhoneGap, HTML, and JavaScript based framework for building apps that look and act native, but are technically running in an embedded browser. App Development: Cordova vs React Native vs Xamarin vs DIY. Are you still writing native iOS or Android code for creating mobile apps? 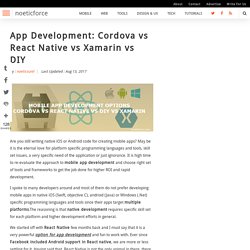 May be it is the eternal love for platform specific programming languages and tools, skill set issues, a very specific need of the application or just ignorance. It is high time to re-evaluate the approach to mobile app development and choose right set of tools and frameworks to get the job done for higher ROI and rapid development. I spoke to many developers around and most of them do not prefer developing mobile apps in native iOS (Swift, objective C), android (Java) or Windows (.Net) specific programming languages and tools since their apps target multiple platforms.The reasoning is that native development requires specific skill set for each platform and higher development efforts in general.

We started off with React Native few months back and I must say that it is a very powerful option for app development and fun to work with. Which One Is Your Pick For Cross-Platform App Development – Xamarin or Ionic? - webtechzone. If you're in the market for developing an enterprise or consumer-facing app, you would have heard about cross-platform app development frameworks. 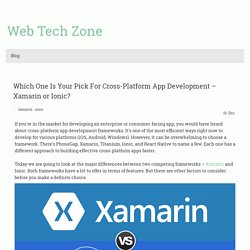 It's one of the most efficient ways right now to develop for various platforms (iOS, Android, Windows). However, it can be overwhelming to choose a framework. There's PhoneGap, Xamarin, Titanium, Ionic, and React Native to name a few. Each one has a different approach to building effective cross-platform apps faster.