Life Of Pi. Disclaimer: This work has been submitted by a student. 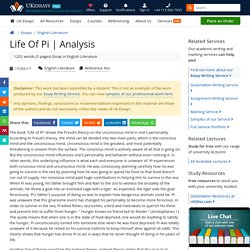 This is not an example of the work produced by our Essay Writing Service. You can view samples of our professional work here. Any opinions, findings, conclusions or recommendations expressed in this material are those of the authors and do not necessarily reflect the views of UK Essays. Author's inspiration. I arrived in India on December 31 1996, a new year's eve I won't forget. 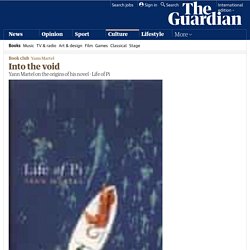 I wandered around Bombay in a state of interior bleakness. I felt isolated in that crush of a city, without purpose and without buoys. When I look back, I see now that I had stepped into a great void that had three aspects. The Life of Pi: Book review – level 3. The book and its author The Life of Pi tells the extraordinary story of Pi, a teenage boy from India, who is shipwrecked and finds himself trapped in a lifeboat in the Pacific Ocean with a ferocious tiger. 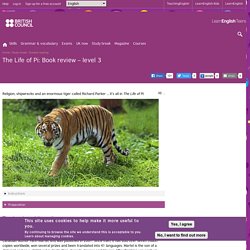 It is the third book by the Canadian author Yann Martel, and was published in 2001. Since then, it has sold over seven million copies worldwide, won several prizes and been translated into 41 languages. Martel is the son of a diplomat and as a child lived in Costa Rica, Canada, France and Mexico. After finishing university in Canada, he spent two years travelling round India and then decided to devote himself to writing. The Life of Pi: Book review – level 1. The book and its author The Life of Pi is about a teenage boy from India, called Pi, who travels across the Pacific Ocean in a lifeboat. 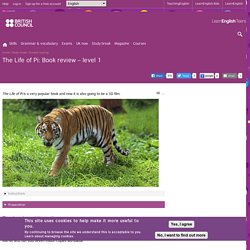 His companion in the lifeboat is an enormous tiger. It was written by the Canadian author Yann Martel, and has sold seven million copies worldwide. The story. Japan tsunami survivor Hiromitsu Shinkawa found 10 miles out at sea. A 60-year-old man has been found on the roof of his floating house nearly 10 miles out at sea, two days after the tsunami that devastated the north-east coast of Japan. 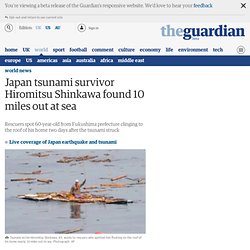 Hiromitsu Shinkawa must have resigned himself to his fate when he was swept away by the retreating tsunami that roared ashore in his home town of Minami Soma in Fukushima prefecture. Maximum Survival - Survival. My Grandmother's Story. Interview by Dalia Levine My grandmother, Sonia Bar, was only in her teens when Hitler spread messages of hatred across Europe and the world. 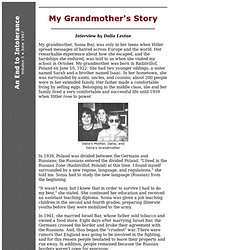 Her remarkable experience about how she escaped, and the hardships she endured, was told to us when she visited my school in October. My grandmother was born in Radzivillof, Poland on June 10, 1922. She had two younger siblings, a sister named Sarah and a brother named Isaac. In her hometown, she was surrounded by aunts, uncles, and cousins; about 200 people were in her extended family. Dalia's Mother, Dalia, andDalia's Grandmother In 1939, Poland was divided between the Germans and Russians; the Russians entered the divided Poland. "It wasn't easy, but I knew that in order to survive I had to do my best," she stated. In 1941, she married Israel Bar, whose father sold tobacco and owned a food store. "There were rumors that the Germans were cruel, but nobody could believe that something so catastrophical as this could happen," Mrs. 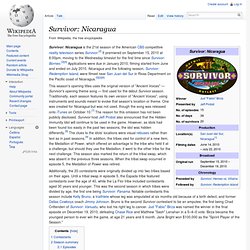 Traditionally, each season features its own version of "Ancient Voices", using instruments and sounds meant to evoke that season's location or theme. One was created for Nicaragua but was not used, though the song was released onto iTunes on October 10.[7] The reason for this omission has not been publicly disclosed. Survivor host Jeff Probst also announced that the Hidden Immunity Idol will continue to be used in the game. Contestants[edit] Brenda Lowe returned for Survivor: Caramoan as a part of the "Favorites" tribe, placing 6th overall. Season summary[edit] Twenty new castaways were divided into tribes by age: La Flor, which consisted of castaways 30 and younger, and Espada, which consisted of castaways 40 and older. 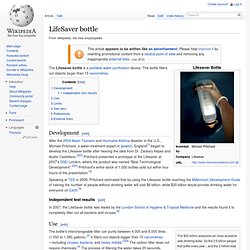 The bottle filters out objects larger than 15 nanometres. Development[edit] After the 2004 Asian Tsunami and Hurricane Katrina disaster in the U.S., Michael Pritchard, a water-treatment expert in Ipswich, England[1] began to develop the Lifesaver bottle after hearing the idea from Dr. Zackary Kepes and Austin Castellano.[2][3] Pritchard presented a prototype of the Lifesaver at 2007's DSEi London, where the product was named "Best Technological Development".[2][4] Pritchard's entire stock of 1,000 bottles sold out within four hours of the presentation.[3] Independent test results[edit] Survivalbiz.com. Step 7. 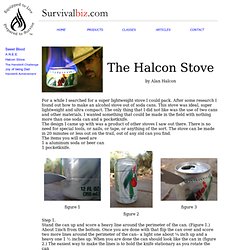 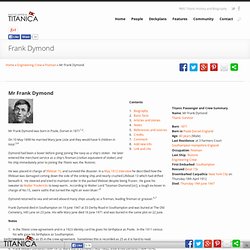