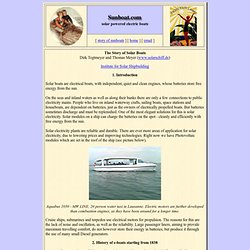 On the seas and inland waters as well as along their banks there are only a few connections to public electricity mains. People who live on inland waterway crafts, sailing boats, space stations and houseboats, are dependent on batteries, just as the owners of electrically propelled boats. But batteries sometimes discharge and must be replenished. One of the most elegant solutions for this is solar electricity. Solar modules on a ship can charge the batteries on the spot - cleanly and efficiently with free energy from the sun. The Electric Boat Association (EBA) Above the Waterline's New Electric Propulsion for Sailboats. Santa Barbara, CA ( PRWEB ) September 14, 2008 — Above the Waterline’s New Electric Drive revolutionizes sailboat propulsion.

These drives are quieter, smoother, and more powerful than any diesel. Power is available at the flick of a switch…there is no waiting for an engine to start and warm up. Rapid acceleration, braking and accurate slow speed control improve docking and piloting. The motor can run continuously at 4.7 KW and can surge to 9 KW for collision avoidance, an important safety feature. ATW drives have extended range capabilities. Electric Sailboat - Solar Village - Solar power you can use.

Sailing is a beautiful way to travel. 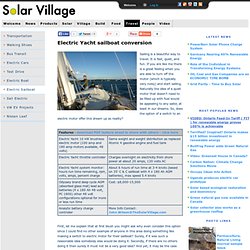 It is fast, quiet, and fun. If you are like me there is a great feeling when you are able to turn off the motor (which is typically very noisy) and start sailing. Naturally the idea of a quiet motor that doesn't need to be filled up with fuel would be appealing to any sailor, at least in our dreams. Electric trolling motors for small sailboats? The sailing school I went to allowed you to charter their school boats, Tanzer 22s, for day sails. 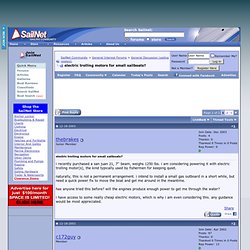 They had 12 boats or so, but only three outboards. If you didn''t get there early, you had to get towed out and back. So I pulled a trolling motor off of my small aluminum fishing boat (35-pounds of thrust) and brought it with me for the Tanzer. Got me out away from the dock and out on the water, and back with no problem. In later years I used it on a Catalina 22 with similar results. They make 55-pound thrust saltwater motors and I was considering one of those to replace an old Johnson 9.9 that was a bit finicky. The 55-pound thrust motor is used with a 12-volt deep cycle battery. Electric propulsion. I have a little experience with electric aux. power having spent a few days messing about on a little gaff rigger with an electric system. 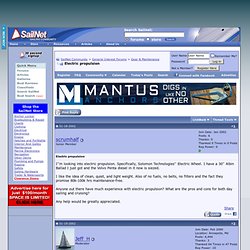 Here are my initial conclusions. Electric works best simple boats and for daysailer/overnighters. There really is a limited amount of electrical storage capacity so you don''t have the reserves to operate refrigeration or an autopilot, or some of the complicated electronic systems that have become so popular. You lack the kind of reserves to run navigation lights for several nights in a row. Electric boat. While a significant majority of water vessels are powered by diesel engines, with sail power and gasoline engines also remaining popular, boats powered by electricity have been used for over 120 years. 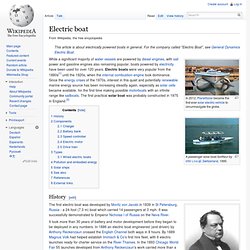 Electric boats were very popular from the 1880s[1] until the 1920s, when the internal combustion engine took dominance. Since the energy crises of the 1970s, interest in this quiet and potentially renewable marine energy source has been increasing steadily again, especially as solar cells became available, for the first time making possible motorboats with an infinite range like sailboats.

The first practical solar boat was probably constructed in 1975 in England.[2] History[edit] The first electric boat was developed by Moritz von Jacobi in 1839 in St Petersburg, Russia - a 24-foot (7.3 m) boat which carried 14 passengers at 3 mph. It took more than 30 years of battery and motor development before they began to be deployed in any numbers.

Components[edit] Charger[edit] Electric Inboard Boat Motors. Zero Emission Boating The Hunter 27e with electric propulsion remains entirely the same as the company’s very popular standard H-27 however the diesel engine has been substituted with the Elco EP-1200, an electric inboard boat motor that offers the same amount of thrust as the H-27′s normal 14hp diesel engine. 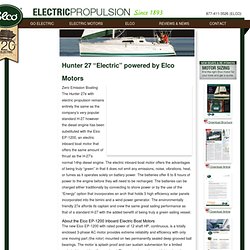 The electric inboard boat motor offers the advantages of being truly “green” in that it does not emit any emissions, noise, vibrations, heat, or fumes as it operates solely on battery power. The batteries offer 6 to 8 hours of power to the engine before they will need to be recharged. The batteries can be charged either traditionally by connecting to shore power or by the use of the “Energy” option that incorporates an arch that holds 3 high efficiency solar panels incorporated into the bimini and a wind power generator. Multihulls World : the magazine of catamarans, trimarans, performance and power catamarans. Dossiers Children aboard We all think about it, as we take our children cruising, whether for a week or for 10 years: how will they adapt to this very unusual life, with its safety rules and overcrowded ... 20 years of Open 60’ multihulls After Lionel Lemonchois’ extravagant singlehanded ride during the 2006 Rhum and the spectacular 2007 Route du Café by Franck Cammas and Steve Ravussin, it is hard to believe in ... 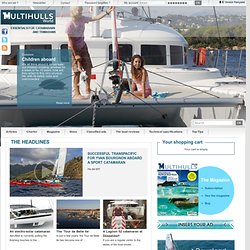 CROSSING THE ATLANTIC: An accessible dream. Throughout time, sailors have never stopped going to see if life is better on the other side of the Atlantic. Coastal camping: the pleasure of sailing, quite simply! You have been dreaming about leaving on a boat and experiencing an epic adventure with friends or family, for years ... 10 good reasons to change to a cat... SoelCat 12 - solar electric catamaran - Soel Yachts.