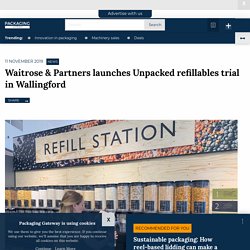 The retailer developed the Unpacked initiative to reduce plastic use. The concept will test consumer attitudes towards packaging-free product shopping. The renovated Wallingford store also has new sushi counter, dry-aged beef cabinet, new hot chicken and updated cheese and deli counter, click and collect area, self-serve checkouts and more. The dedicated refillable zone at the store also features frozen ‘pick and mix’ and refillables zone for essential, detergent and washing up liquid, wine, beer and coffee. BayCom to acquire Grand Mountain Bancshares for $13.9m. US-based BayCom Corp, the holding company for United Business Bank, and Grand Mountain Bancshares (GMB), the holding company for Grand Mountain Bank, FSB, have signed a merger agreement under which BayCom will acquire GMB in an all-cash transaction worth around $13.9m. 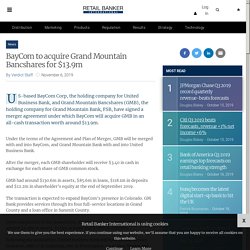 Under the terms of the Agreement and Plan of Merger, GMB will be merged with and into BayCom, and Grand Mountain Bank with and into United Business Bank. After the merger, each GMB shareholder will receive $3.40 in cash in exchange for each share of GMB common stock. GMB had around $130.6m in assets, $85.6m in loans, $118.1m in deposits and $12.2m in shareholder’s equity at the end of September 2019. The transaction is expected to expand BayCom’s presence in Colorado. GM Bank provides services through its four full-service locations in Grand County and a loan office in Summit County. Upon completion of the transaction, the combined company will have around $2.2bn in assets, $1.5bn in loans and $1.8bn in deposits. Nestlé Waters acquires bottled water distributor Watchung. Nestlé Waters North America (NWNA) has announced the acquisition of bottled water distributor Watchung Spring Water in the US. 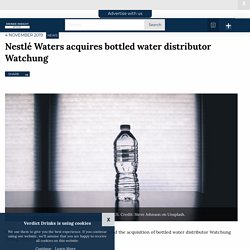 The acquisition will enable NWNA to expand ReadyRefresh by Nestlé beverage delivery service to the New Jersey coast. ReadyRefresh by Nestlé executive vice-president Henrik Jelert said: “This transaction is part of ReadyRefresh’s focus on aligning its current operations to meet its future needs and positioning the company for long-term success. “We look forward to welcoming Watchung Beverage Delivery associates into the ReadyRefresh family and serving our new customers.” Under the deal, signed by NWNA and Watchung last month, NWNA acquired the Watchung service, assuming the lease of the building where the latter operated. The deal will see the expansion of ReadyRefresh footprint across various provinces of New Jersey including Monmouth, Ocean, Mercer, Atlantic Cape May and Cumberland. 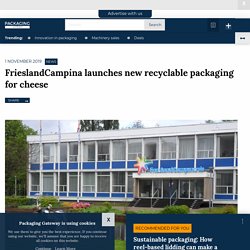 The new packaging will enable the company to reduce the plastic content in packaging by 30% for most of its cheese sold in Europe. FrieslandCampina Packaging Development global director Patrick van Baal said: “Most cheese packages are made from different types of plastic, which means that they cannot be recycled. We now have a solution for that. “Our new cheese packaging consists of polypropylene, a material that can be separated and recycled and can be used for a new life as, for example, a vacuum cleaner.” FrieslandCampina expects the packaging to eliminate more than 300,000kg of plastic annually. The company has previously achieved a plastic reduction of more than 20%. India’s Yes Bank receives $1.2bn investment offer from foreign investor. India’s Yes Bank has received a binding offer of $1.2bn financing from an unnamed global investor as it seeks to improve its capital flow. 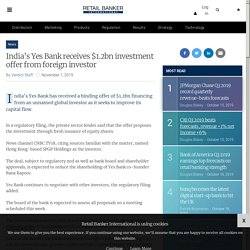 In a regulatory filing, the private sector lender said that the offer proposes the investment through fresh issuance of equity shares. News channel CNBC TV18, citing sources familiar with the matter, named Hong Kong-based SPGP Holdings as the investor. The deal, subject to regulatory nod as well as bank board and shareholder approvals, is expected to reduce the shareholding of Yes Bank co-founder Rana Kapoor. Yes Bank continues to negotiate with other investors, the regulatory filing added. The board of the bank is expected to assess all proposals on a meeting scheduled this week. HDFC snaps up 9.89% stake in Bandhan Bank purchasing 159.3m shares. HDFC, the parent company of Indian private-sector lender HDFC Bank, has acquired a 9.89% stake in Bandhan Bank. 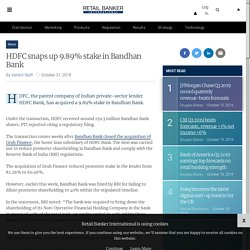 Under the transaction, HDFC received around 159.3 million Bandhan Bank shares, PTI reported citing a regulatory filing. The transaction comes weeks after Bandhan Bank closed the acquisition of Gruh Finance, the home loan subsidiary of HDFC Bank. The deal was carried out to reduce promoter shareholding in Bandhan Bank and comply with the Reserve Bank of India (RBI) regulations. The acquisition of Gruh Finance reduced promoter stake in the lender from 82.26% to 60.96%. Gerber partners with TerraCycle to recycle baby food packaging. US-based nutrition provider Gerber and recycling company TerraCycle have partnered to recycle baby food packaging across the country. 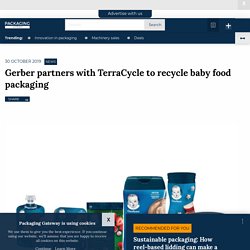 The two companies are individually committed to eliminate waste and enable customers to recycle baby food packaging via TerraCycle. To join the programme, customers need to enrol on the Gerber Recycling Program page. Then, they can send non-municipally recyclable packaging. The packaging will be collected, cleaned and converted into hard plastic. The recycled plastic can be reused to produce new recycled items. Interested individuals, schools, offices or community organisations can participate in the programme. 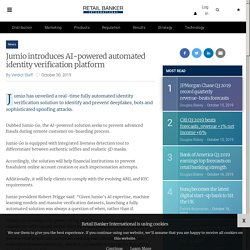 Dubbed Jumio Go, the AI-powered solution seeks to prevent advanced frauds during remote customer on-boarding process. Jumio Go is equipped with integrated liveness detection tool to differentiate between authentic selfies and realistic 3D masks. Accordingly, the solution will help financial institutions to prevent fraudulent online account creation or such impersonation attempts. Additionally, it will help clients to comply with the evolving AML and KYC requirements. Jumio president Robert Prigge said: “Given Jumio’s AI expertise, machine learning models and massive verification datasets, launching a fully automated solution was always a question of when, rather than if.

The new identity verification solution leverages historic identity verifications, and machine learning to determine identity manipulations. Ban on sugary drinks at work places improves health: Study. Banning sugary drinks at workplaces has shown positive health effects, according to a study conducted by the researchers at the University of California San Francisco (UCSF) in the US. 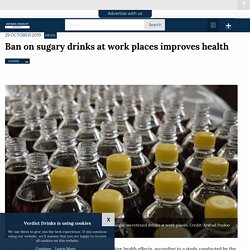 The 10-month study, involving 202 participants, revealed that the ban has led to a 48.5% reduction in the consumption of sugary drinks and a decrease of waist size. Individuals lost an average of 2.1 centimetres from their waistlines, with almost 70% of them showing a decrease in waist size. UCSF Aging, Metabolism and Emotions Center director Elissa Epel said: “This shows us that simply ending sales of sugary drinks in the workplace can have a meaningful effect on improving health in less than one year. “High sugar intake leads to abdominal fat and insulin resistance, which are known risk factors for diabetes, heart disease, cancer and even dementia. Recent studies have also linked sugar intake to early mortality.” UCSF professor in the Philip R. DS Smith upgrades Morrisons’ Best Bacon packaging. 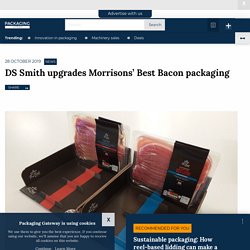 Morrisons employed a team of experts from DS Smith to produce an on-shelf pack for supermarkets. The retailer is also planning to reduce the supply chain and material costs and enhance the customer experience by improving on-shelf product availability. DS Smith strategic account manager Jo Cartwright said: “Our work with Morrisons demonstrates a real partner collaboration to deliver this innovation to meet the supermarket’s relaunch date.

Even though Muslims constitute only 10% of the country’s population, the Philippine government enacted a legislation to promote Islamic finance in August his year. It, however, asked the central bank to finalise the details. Non-small cell lung cancer: AstraZeneca’s Tagrisso trial results presented. Final results from the Phase III FLAURA trial investigating AstraZeneca’s Tagrisso (osimertinib) in locally-advanced or metastatic non-small cell lung cancer (NSCLC) were presented at the European Society of Medical Oncology (ESMO 2019) meeting in Barcelona, Spain.

Braftovi is a BRAF inhibitor, while Mektovi is an anti-EGFR antibody. The trial saw the triple combination therapy compared to cetuximab plus irinotecan-containing regimens (control). Data showed that both primary endpoints of the trial have been met, demonstrating statistically significant improvement in confirmed objective response rate (ORR) and overall survival (OS). Interim analysis of OS was conducted in all 665 patients. Close. Lung cancer blood test may replace tumour biopsy. Patients with advanced non-small cell lung cancer (NSCLC) may soon be offered a blood test to assess their treatment options, instead of having to provide a tumour sample for analysis.

Data from the Blood First Assay Screening Trial (BFAST) presented at the European Society for Medical Oncology (ESMO) Congress 2019 has shown that the test can identify DNA mutations in NSCLC patients by picking up tiny pieces of tumour DNA shed by cancer cells into the blood. This information can be used to assess patient suitability for targeted medicines. In the BFAST analysis, over 2,200 patients with untreated NSCLC had blood tests to check for multimer genetic mutations.

Overall, 119 of them were found to have tumour DNA showing a rearrangement of the ALK gene. Alectinib, a cancer treatment that targets the ALK mutation, was given to 87 of these patients. Clinicians’ ability to identify the individual genetic mutations driving the progression of NSCLC has been a major breakthrough in oncology. Bristol-Myers Squibb: Phase III CheckMate-227, Part 1 study ESMO 2019.

Roche's Tecentriq: Phase III IMpower110 study at ESMO 2019. ESMO 2019: BeiGene presents data on tislelizumab and pamiparib. ESMO 2019: New early colon cancer detection test yields positive results. Biosimilars in oncology: immunogenicity and extrapolation at ESMO 2019. A ‘special session’ during the first day of the European Society for Medical Oncology conference (ESMO 2019) highlighted evidence demonstrating that biosimilar use in oncology is safe and beneficial, and encouraged physicians attending the session to prescribe biosimilars to their patients. Speakers acknowledged that there are many myths present within the market, and noted that patients often see questions surrounding biosimilar use online, and these concerns are fed back to healthcare providers. Coffee cup reform: Inside the sustainable packaging mission of Kaffeeform. Norway’s DNB bank launches new version of mobile banking app. ESMO 2019: Merck unveils neoadjuvant/adjuvant TNBC trial results.