Why Should One Learn Python Programming Language? Short Bytes: Why is Python now the most popular programming language taught in high-schools, computer science, and engineering schools? 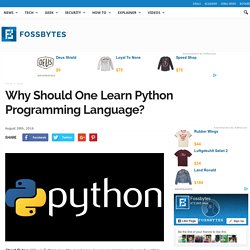 Python’s high-level approach and English-like syntax make it easy to learn, easy to write, and easy to extend. Python is the new de facto learning language around the world and here is why. Python was introduced to the world 25 years ago by Guido Van Rossum who had, at that point, been incubating it for several years. Van Rossum has been dubbed Python’s Benevolent Dictator for Life by the community.

Since then, Python has grown from a cool toy, to a tool for academics, and all the way up to a world-class programming language. Not A Programmer? Python has been used to teach people programming from middle school to college and university. Use It Anywhere Python is cross-platform, meaning it can be used almost anywhere. Automate Your Tasks Prototype Your Project It’s Easy! How many fossBytes readers know Python? 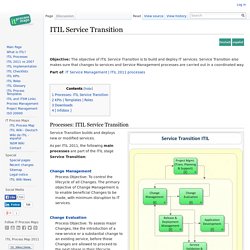 Change Evaluation Process Objective: To assess major Changes, like the introduction of a new service or a substantial change to an existing service, before those Changes are allowed to proceed to the next phase in their lifecycle. Project Management (Transition Planning and Support) Process Objective: To plan and coordinate the resources to deploy a major Release within the predicted cost, time and quality estimates. Application Development. Top 10 reasons a CMDB implementation fails. Below are some of the common reasons that CMDB implementations fail. 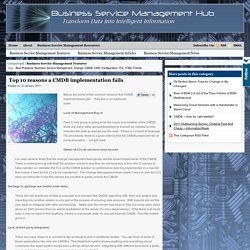 They are in no particular order. Lack of Management Buy-in Face it, one group is going to be the buyer and installer of the CMDB, there are many other groups/departments that will be needed to help maintain the data as well as use the data. If there is no edict to leverage ITIL processes, there is a good chance that the CMDB project will fail or more accurately… not get used. Owner of CI’s do not have easy access I’ve seen several times that the change management team/group are the buyer/install/owner of the CMDB. Garbage in, garbage out (and/or stale data) There are lots of sources of data to populate and maintain the CMDB, exporting XML from one system and importing into another system is only part of the process of ensuring data accuracy. Lack of third party Integration There are many reasons to connect to the products to pull in additional details. 100% or NOTHING Hard to search/find things Over designed/engineered Schema. 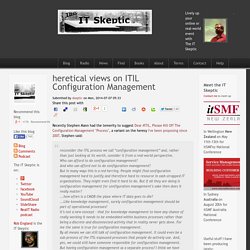 Of course some talked sense These things can all be overcome with commitment, hard work and - often - a lot of money. But they were pretty much drowned out amongst the outrage. How many organisations have a CMDB? <div class="disqus-noscript"><a href=" the discussion thread. ITIL’s dead elephant: CMDB can't be done. Note: this is the original "dead elephant" post from back in 2006. 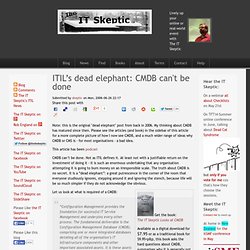 My thinking about CMDB has matured since then. Please see the articles (and book) in the sidebar of this article for a more complete picture of how I now see CMDB, and a much wider range of ideas why CMDB or CMS is - for most organisations - a bad idea. This article has been podcast CMDB can’t be done. Business Process Management. User Community. Simplifying IT Complexity. ITIL® Home.