List of Company Slogans. Slogans & Jingles. It is widely thought that primitive man may have used slogan-like utterances to communicate the value proposition of an idea, such as the inventor of the wheel who grunted to a skeptical audience: “It’s round. 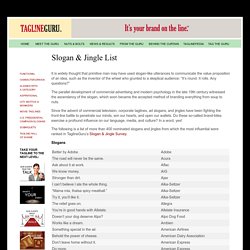 It rolls. Any questions?” The parallel development of commercial advertising and modern psychology in the late 19th century witnessed the ascendancy of the slogan, which soon became the accepted method of branding everything from soup to nuts. 360+ Most Famous Business Taglines Ever.