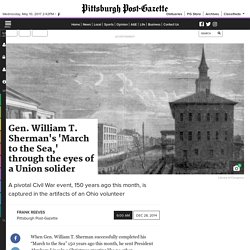 William T. Sherman successfully completed his “March to the Sea” 150 years ago this month, he sent President Abraham Lincoln a Christmas greeting like no other. “I beg to present you as a Christmas gift the City of Savannah, with one hundred and fifty guns and plenty of ammunition, also twenty-five thousand bales of cotton,” the Union commander telegraphed his commander-in-chief shortly after the Atlantic Coast city fell on Dec. 21, 1864. It was a dramatic ending to one of the most daring maneuvers during the Civil War. Even the president confessed that he had been “anxious, if not fearful,” about Sherman’s decision to march 300 miles through enemy territory from Atlanta to Savannah, Ga., during November and December 1864. “Now, the undertaking being a success, the honor is all yours,” Lincoln wrote Sherman the day after Christmas. Len Barcousky Eyewitness 1864: Pittsburghers thankful as war nears end As many as 60,000 Union soldiers participated in the Savannah campaign. 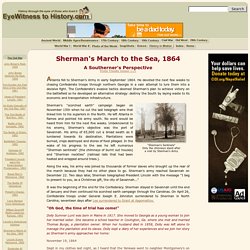 He devoted the next few weeks to chasing Confederate troops through northern Georgia in a vain attempt to lure them into a decisive fight. Sherman's March to the Sea. As a result of the hardships on women and children, desertions increased in Robert E. 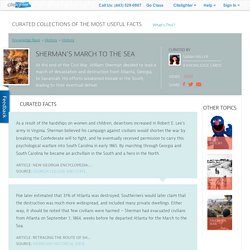 Lee's army in Virginia. Sherman believed his campaign against civilians would shorten the war by breaking the Confederate will to fight, and he eventually received permission to carry this psychological warfare into South Carolina in early 1865. By marching through Georgia and South Carolina he became an archvillain in the South and a hero in the North. Save Capture to Project Poe later estimated that 37% of Atlanta was destroyed; Southerners would later claim that the destruction was much more widespread, and included many private dwellings. On November 12, 1864, the destruction of Atlanta began. Shermans March 1864 facts, information, pictures. The Oxford Companion to American Military History © The Oxford Companion to American Military History 2000, originally published by Oxford University Press 2000. 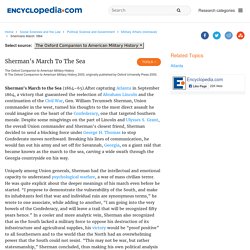 Sherman's March to the Sea (1864–65).After capturing Atlanta in September 1864, a victory that guaranteed the reelection of Abraham Lincoln and the continuation of the Civil War, Gen. William Tecumseh Sherman, Union commander in the west, turned his thoughts to the most direct assault he could imagine on the heart of the Confederacy, one that targeted Southern morale. Despite some misgivings on the part of Lincoln and Ulysses S. Grant, the overall Union commander and Sherman's closest friend, Sherman decided to send a blocking force under George H. Thomas to stop Confederate moves northward. Uniquely among Union generals, Sherman had the intellectual and emotional capacity to understand psychological warfare, a war of mass civilian terror. Sherman's March To The Sea.

Stumbling in Sherman’s Path By Noah Andre Trudeau Hardee’s field headquarters was about 40 miles from Beauregard’s, but Beauregard might as well have been on the moon. 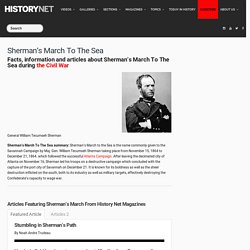 Standard histories of Major General William T. Sherman’s celebrated March to the Sea invariably portray the Confederacy’s response as inconsequential. Former Southern Brigadier General Clement A. Efforts to forestall Sherman’s operations in central Georgia began in late September 1864, when President Jefferson Davis personally visited the threatened front. Just two months earlier Davis had bumped Hood up the seniority ladder to take over the army after General Joseph E. Hood did have another plan, which, considering his situation, was about as good as could be expected. Should Sherman not play along—by choosing to thrust southward through Georgia instead—Hood would then harry his rear. Hood’s army wasn’t the only piece of Davis’ strategy. 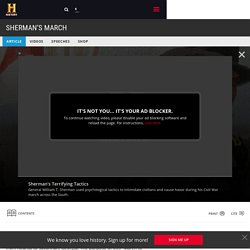 Accessing video content is free, however, you will need to verify your TV provider subscription by logging in in order to access all of our video content. Can I watch videos if my TV provider isn't currently supported? Yes! What kind of programming is available if I log in? You will get access to more full episodes than ever before. How often is new video added to the website?

There will be new episodes and web exclusives added every day. How quickly does a new episode get added after it airs on TV?