Why Wwise? A common question within the game audio community is: How can I explain the benefits of using middleware to my boss or client? 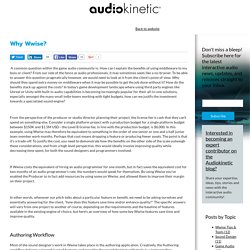 From our side of the fence as audio professionals, it may sometimes seem like a no-brainer. To be able to answer this question pragmatically however, we would need to look at it from the client's point of view. Why should they spend extra money on middleware when it may be possible to get the job done without it? How do the benefits stack up against the costs? In today's game development landscape where using third party engines like Unreal or Unity with built-in audio capabilities is becoming increasingly popular for their all-in-one solutions, especially amongst the many small indie teams working with tight budgets, how can we justify the investment towards a specialized sound engine?

From the perspective of the producer or studio director planning their project, the license fee is cash that they can't spend on something else. Authoring Workflow Profiler. Security Check Required. Implementing the Korg Monotron Delay in Wwise. On Your Own dev stream 11 - Integrating WWise with Cryengine. Star Citizen Audio Update. From my perspective the conversion of audio middleware from Fmod to Wwise has been a year’s long process that began with early naive aspirations for a quick change-over and only concluded after a drawn-out haul of many incremental yet monumental changes. 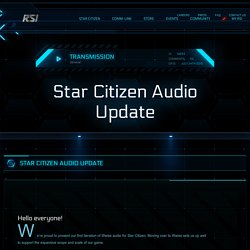 From an audio content standpoint, the earlier and faster we converted over, the least amount of Fmod content and implementation would be have to be re-done. Seems like a no-brainer but unfortunately the situation would not allow for such a fast change-over with everyone focusing on each next release or demo version that year. In May 2014 we examined an integration of Wwise in CryEngine which had been done by an outside company. This was at a time before Crytek had released an official Wwise integration and we did not yet have any details about it or an eta when it would be available which was compounded by the uncertainty of their financial situation at the time. Review: Wwise For Game Audio.

If game audio is where you want to be, you’ll need to look at one of the audio middleware solutions that are available. 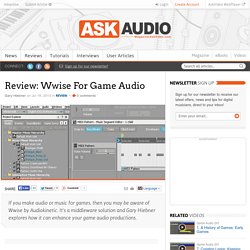 The one I particularly like is Audiokinetic’s Wwise. You may be wondering what is middleware? In its most basic explanation, audio middleware is a tool that manages your audio assets that will be used in a game and integrates them with the game build. What I like about Wwise is that it’s a feature-rich audio middleware solution. At first glance, the interface looks quite daunting as there are many menus, submenus, and folder structures. 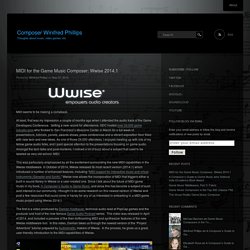 At least, that was my impression a couple of months ago when I attended the audio track of the Game Developers Conference. Setting a new record for attendance, GDC hosted over 24,000 game industry pros who flocked to San Francisco’s Moscone Center in March for a full week of presentations, tutorials, panels, awards shows, press conferences and a vibrant exposition floor filled with new tech and new ideas. As one of those 24,000 attendees, I enjoyed meeting up with lots of my fellow game audio folks, and I paid special attention to the presentations focusing on game audio. Amongst the tech talks and post-mortems, I noticed a lot of buzz about a subject that used to be labeled as very old-school: MIDI. This was particularly emphasized by all the excitement surrounding the new MIDI capabilities in the Wwise middleware. The next videos were produced by Berrak Nil Boya, a composer and contributing editor to the Designing Sound website.

Using Wwise with Control Surfaces - Part 2. My Game Audio Adventure - Part 2 — Haroon Thantrey - Sound Design. MIDI in Wwise for the Game Music Composer: Peggle Blast. In a previous blog post, we took a look at a few tutorial resources for the latest version of the Wwise audio middleware. 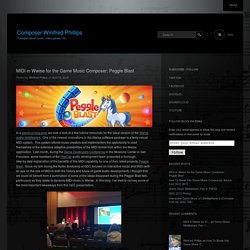 One of the newest innovations in the Wwise software package is a fairly robust MIDI system. This system affords music creators and implementers the opportunity to avail themselves of the extensive adaptive possibilities of the MIDI format from within the Wwise application. Last month, during the Game Developers Conference in the Moscone Center in San Francisco, some members of the PopCap audio development team presented a thorough, step-by-step explanation of the benefits of this MIDI capability for one of their latest projects, Peggle Blast. “Peggle Blast: Big Concepts, Small Project” was presented on Thursday, March 5th by three members of the PopCap audio team: technical sound designer RJ Mattingly, audio lead Jaclyn Shumate, and senior audio director Guy Whitmore. Getting Wwiser. Wwise Unity 5 Integration Tutorial - Part 1. Midi Routing From a DAW to Wwise - Part I (Set-up) Wwise and cube game set up.

In need to design sounds for a first person shooter game, At the time of this writing I had two audio engines of choice. #1 FMOD #2 Wwise As Audio Kinetic provides cube game as a sample it was the most simplest solution to easily get started and focus on audio and sound design aspect of the game. 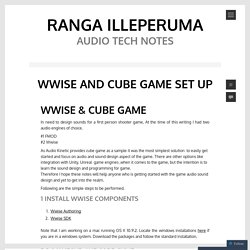 There are other options like integration with Unity, Unreal game engines ,when it comes to the game, but the intention is to learn the sound design and programming for game. Therefore I hope these notes will help anyone who is getting started with the game audio sound design and yet to get into the realm. Following are the simple steps to be performed. 1 Install Wwise Components Note that I am working on a mac running OS X 10.9.2. 2 Download the cube game The game can be downloaded here ( for mac). 3 Set up the libSDL2 4 Relocate CubeDemo Folder. Wwise Unity Integration Tutorial - Basic Integration Set-up (Better Version)

SD Rulz - How to control Wwise with MIDI and your DAW. Hello fellow game sound designers ! 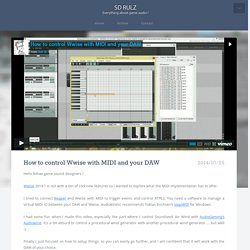 Wwise 2014.1 is out with a ton of cool new features so I wanted to explore what the MIDI implementation has to offer. I tried to connect Reaper and Wwise with MIDI to trigger events and control RTPCs. You need a software to manage a virtual MIDI IO between your DAW and Wwise. Audiokinetic recommends Tobias Erichsen’s loopMIDI for Windows. I had some fun when I made this video, especially the part where I control Soundseed Air Wind with AudioGaming’s Audiowind.

Finally I just focused on how to setup things, so you can easily go further, and I am confident that it will work with the DAW of your choice. It’s cool to see that the gap between traditional DAW and middleware is reduced thanks to those new features ! CRYENGINE - Wwise Project DLC on Steam. The EaaS Wwise Project DLC gives you access to the official Wwise Project used to integrate all Audio in the CRYENGINE SDK Levels. 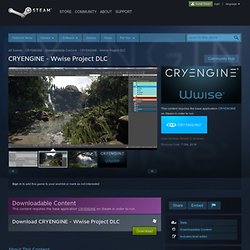 The project will give a good overview of the possibilities Wwise and CRYENGINE have to offer and shows best practices in how to set up the project structure in Wwise, and to use it together with CRYENGINE's new AudioControlsBrowser(ACB). By installing the Wwise Project DLC you will enable the Audio Controls Browser to display all setup connections between CRYENGINE’s ATL and the Wwise audio middleware. This in turns gives you the freedom to rearrange connections any way you want. Additionally you can use the shipped Audio Sample Assets to learn and create your own Audio Features with the new ATL system and Wwise. All Audio content of the wwise SDK Demo project: Crytek Gmbh. Instructions to set up this DLC can be found in the CRYENGINE Documentation. 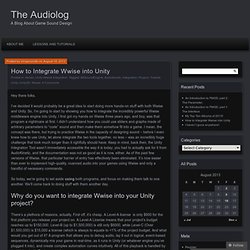 I’ve decided it would probably be a great idea to start doing more hands-on stuff with both Wwise and Unity. So, I’m going to start by showing you how to integrate the incredibly powerful Wwise middleware engine into Unity. I first got my hands on Wwise three years ago, and boy, was that program a nightmare at first. I didn’t understand how you could use sliders and graphs made of arbitrary parameters to “code” sound and then make them somehow fit into a game. I mean, the concept was there, but trying to practice Wwise in the capacity of designing sound – before I even knew how to use Unity, let alone integrate the two tools together, no less – was an incredibly huge challenge that took much longer than it rightfully should have. So today, we’re going to set aside using both programs, and focus on making them talk to one another. 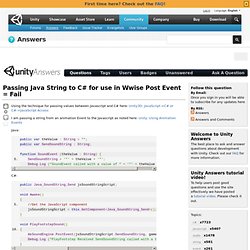 Q&A - Is there a way to open two wwise projects at once? 日本語 Welcome. Please create an account or sign in. Jetfall: Music, Crowd and Music Driven Crowd in Wwise. Real-time audio mixing (Wwise+Unity) So much to do and so little time, but alas I swore to continue with this blog. The video below shows a Unity editor mix system for dynamically controlling the volume of grouped sounds via Wwise RTPCs. This builds from previous plug-in work , but now I have an official game project to use it on! [sinister laugh] The game is still very much in development, but it’s coming along. Real-time audio mixing with Wwise and Unity3D from Roel_San on Vimeo . While the system provides the ability to easily adjust levels of sounds in the Unity editor, it also acts as an active mix system, receiving method calls in-code that change the levels of various sound groups depending on a defined game-state.

Why the need for such a tool? One of the main problems encountered while implementing sounds for the project was how to structure sounds so that they are mixed properly. Unfortunately, it was only after struggling a bit through the implementation process that I later ran into this gem . Brendan Wood » Prototyping Procedural Music for SounDrift in Wwise. A while ago I came upon a link by Ariel Gross where he made a procedurally generated “song” using only tone generators in Wwise. Since I am currently working on a generative music composition game album called SounDrift, this type of technique for composing intrigued me. My knowledge of Wwise beforehand was that it was good for sound effects and interactive music, not as a tool for prototyping generative compositions.