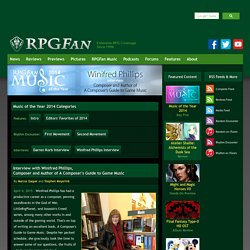 That's on top of writing an excellent book, A Composer's Guide to Game Music. Despite her packed schedule, she graciously took the time to answer some of our questions, the fruits of which can be enjoyed below! Can you tell us a little bit about your background? What kind of musical training do you have? How did you become involved writing music for video games? I'm a classically trained musician. Are there any musicians you'd really love to collaborate with that you haven't already? I think every composer would love to work with Mozart or Beethoven — if only that time machine were handy!

Do you have any favorite video game music or composers? A lot of music from old-school classic games sticks in my head. What lead to your desire to write your book? An easy question! Interview: Winifred Phillips, Composer of Award Winning Song for LittleBigPlanet 3 – n3rdabl3. The Hollywood Music in Media Awards were recently announced, and we spoke to Winifred Phillips, who was the winner for Best Song for a Video Game (LittleBigPlanet 3). 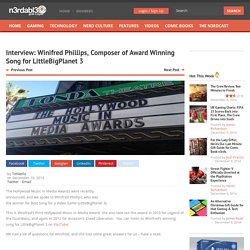 This is Winifred’s third Hollywood Music in Media Award; she also took out the award in 2010 for Legend of the Guardians, and again in 2012 for Assassin’s Creed Liberation. You can listen to Winifred’s winning song for LittleBigPlanet 3 on YouTube. We had a lot of questions for Winifred, and she had some great answers for us – have a read. Q. Interview with LittleBigPlanet 3 Composer Winifred Phillips - NZGamer.com. We chat with Winifred Phillips, one of the composers who worked on the music for LittleBigPlanet 3. 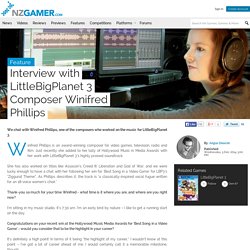 Winifred Phillips is an award-winning composer for video games, television, radio and film. Just recently she added to her tally of Hollywood Music in Media Awards with her work with LittleBigPlanet 3’s highly praised soundtrack. She has also worked on titles like Assassin’s Creed III: Liberation and God of War; and we were lucky enough to have a chat with her following her win for ‘Best Song in a Video Game’ for LBP3’s "Ziggurat Theme”. As Phillips describes it, the track is "a classically-inspired vocal fugue written for an 18-voice women’s choir. " Thank-you so much for your time Winifred - what time is it where you are, and where are you right now? I’m sitting in my music studio. Congratulations on your recent win at the Hollywood Music Media Awards for ‘Best Song in a Video Game’ - would you consider that to be the highlight in your career? Winifred Phillips Skype Interview.

Interview: Conducting a Symphony with Video Game Composer Winifred Phillips. Sounding off Sometimes great opportunities just fall into your lap, and that’s exactly what happened to us on this occasion. 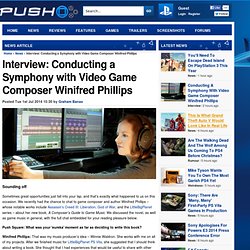 We recently had the chance to chat to game composer and author Winifred Phillips – whose notable works include Assassin’s Creed III: Liberation, God of War, and the LittleBigPlanet series – about her new book, A Composer’s Guide to Game Music. We discussed the novel, as well as game music in general, with the full chat embedded for your reading pleasure below. Push Square: What was your 'eureka' moment as far as deciding to write this book? Assassin's Creed Liberation: How to Write Thematic Music for Games. Ludo 2014: The International Ludomusicology Conference. How to compose music for video games - Ideas. Interview with Professional Composer, Winifred Phillips, Author of A Composer’s Guide to Game Music. The Sound Architect speaks with professional game music composer Winifred Phillips. 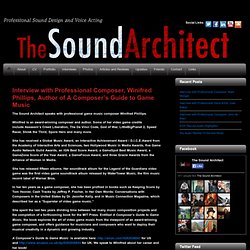 Winifred is an award-winning composer and author. Some of her video game credits include Assassin’s Creed Liberation, The Da Vinci Code, God of War, LittleBigPlanet 2, Speed Racer, Shrek the Third, Spore Hero and many more. She has received a Global Music Award, an Interactive Achievement Award / D.I.C.E.Award from the Academy of Interactive Arts and Sciences, two Hollywood Music in Media Awards, five Game Audio Network Guild Awards, an IGN Best Score Award, a GameSpot Best Music Award, a GameZone Score of the Year Award, a GameFocus Award, and three Gracie Awards from the Alliance of Women in Media. She has released fifteen albums. Her soundtrack album for the Legend of the Guardians video game was the first video game soundtrack album released by WaterTower Music, the film music record label of Warner Bros. GameSoundCon: Melodic Composition, Part One. Montreal International Game Summit - Winifred Phillips, Speaker.

Thoughts about music, video games, etc. (Breaking news: the popular gamers blog Kotaku shared the content of this blog post with their readers, and also added some great information that I didn’t know. 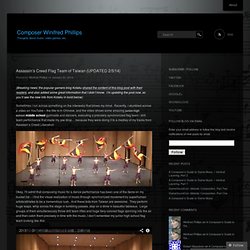 I’m updating the post now, so you’ll see the new info from Kotaku in bold below) Sometimes I run across something on the interwebz that blows my mind. Recently, I stumbled across a video on YouTube – the title is in Chinese, and the video shows some amazing junior high school middle school gymnasts and dancers, executing a precisely synchronized flag team / drill team performance that made my jaw drop… because they were doing it to a medley of my tracks from Assassin’s Creed Liberation. Okay, I’ll admit that composing music for a dance performance has been one of the items on my bucket list – I find the visual realization of music through synchronized movement by superhuman artists/athletes to be a tremendous rush. And these kids from Taiwan are awesome. 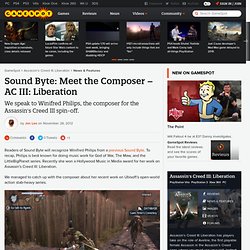 To recap, Philips is best known for doing music work for God of War, The Maw, and the LittleBigPlanet series. Recently she won a Hollywood Music in Media award for her work on Assassin's Creed III: Liberation. We managed to catch up with the composer about her recent work on Ubisoft's open-world action stab-heavy series. What are the key differences when composing film and video games, in your own opinion? Films have a predetermined pacing, and a fixed sequence of events.

Game composition must take into account the unpredictability of the pacing and the order of events. LBP2 Eve's Asylum - Winifred Phillips, composer. Sound Byte - Little Big Planet 2's Winifred Phillips. Music Connection Magazine. Interview with composer Winifred Phillips. Hi Winifred, thank you for taking the time to do this interview. 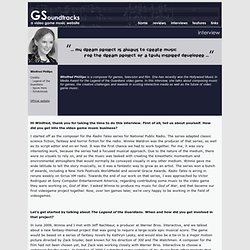 First of all, tell us about yourself. How did you get into the video game music business? I started off as the composer for the Radio Tales series for National Public Radio. The series adapted classic science fiction, fantasy and horror fiction for the radio. Winnie Waldron was the producer of that series, as well as its script editor and on-air host. Let’s get started by talking about The Legend of the Guardians. In June 2009, Winnie and I met with Jeff Nachbaur, a producer at Warner Bros. How did you approach the score musically and how much creative freedom were you given by the developers to find a unique and creative soundscape for the game? I had an enormous amount of freedom for this game. You created a wealth of themes for The Legend of the Guardians. For an epic fantasy, I think themes are very important. Are there any cues/musical passages/themes that are stand-outs or favorites of yours in the score? Yes. Exclusive Interview: Composer Winifred Phillips of 'Assassins Creed III: Liberation' 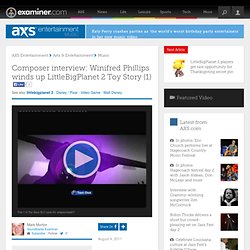