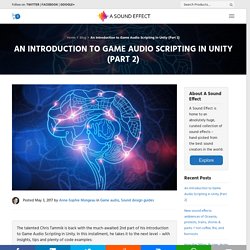 In this installment, he takes it to the next level – with insights, tips and plenty of code examples: Written by Christopher Tammik Hey hey! This part two of my intro to scripting for sound people. If you have not read it yet, head here for part one. Petr Yakyamsev's Blog - Generating audio for Unity-projects with Chuck and OSC. The following blog post, unless otherwise noted, was written by a member of Gamasutra’s community. 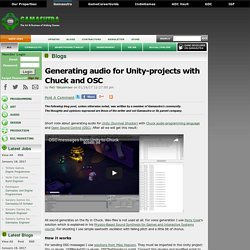 The thoughts and opinions expressed are those of the writer and not Gamasutra or its parent company. Basic Programming - Part 1. Audio Manager Class: The idea here is that we want a centralized place to control how the audio is behaving. 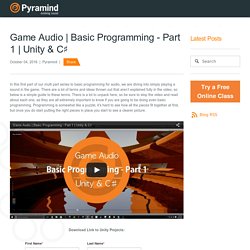 You may have many classes in a game that is controlling audio, but it is a good idea to be able to trace all the decisions to one place. That way if there is a bug in your system, you can easily find and fix it. You can think of it as a team in a game company -- you have producers, programmers, artists, and musicians. Rigging a Character for Audio with MecAnim/Unity3D. Case Study: Usability Testing the Audio Mixer. In a previous blog post, “Testing the Audio Mixer”, the Audio Mixer was discussed from a Software Test Engineering point of view. 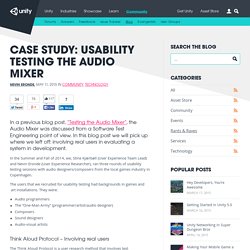 In this blog post we will pick up where we left off: involving real users in evaluating a system in development. In the Summer and Fall of 2014, we, Stine Kjærbøll (User Experience Team Lead) and Nevin Eronde (User Experience Researcher), ran three rounds of usability testing sessions with audio designers/composers from the local games industry in Copenhagen. Mixing Sweet Beats in Unity 5.0. One of the big areas of focus for Unity 5.0 has definitely been in audio. 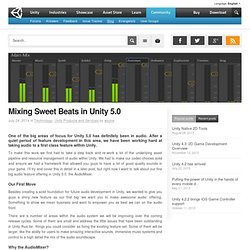 After a quiet period of feature development in this area, we have been working hard at taking audio to a first class feature within Unity. To make this work we first had to take a step back and re-work a lot of the underlying asset pipeline and resource management of audio within Unity. We had to make our codec choices solid and ensure we had a framework that allowed you guys to have a lot of good quality sounds in your game. I’ll try and cover this in detail in a later post, but right now I want to talk about our first big audio feature offering in Unity 5.0, the AudioMixer.

Our First Move. Ahodge/Game-Audio-Harmonization-Tutorial. Trying to Be Less Bad at Game Audio and Stuff. 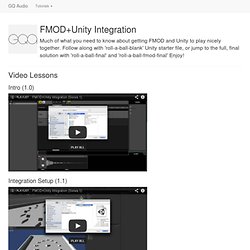 Marc Breaux's Blog - Music and Sound Effects in Unity. The following blog post, unless otherwise noted, was written by a member of Gamasutra’s community. 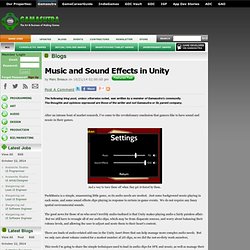 The thoughts and opinions expressed are those of the writer and not Gamasutra or its parent company. After an intense bout of market research, I've come to the revolutionary conclusion that gamers like to have sound and music in their games. Grogon: a man, music composer and sfx creator. To have nice ambience of the closed places like room, cave or church you need to set up Reverb Zones. 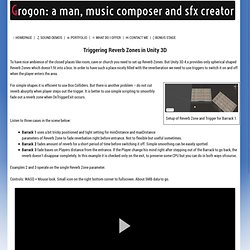 But Unity 3D 4.x provides only spherical shaped Reverb Zones which doesn’t fit into a box. In order to have such a place nicely filled with the reverberation we need to use triggers to switch it on and off when the player enters the area. Setup of Reverb Zone and Trigger for Barrack 1. For simple shapes it is efficient to use Box Colliders. But there is another problem – do not cut reverb aburptly when player steps out the trigger. Listen to three cases in the scene below: Mixing Sweet Beats in Unity 5.0. Home of psai® Procedural Audio Using Pure Data and Unity 3D. Dynamics Processing: Compressor/Limiter, part 2.

In part 1 I detailed how I built the envelope detector that I will now use in my Unity compressor/limiter. 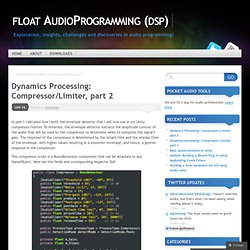 To reiterate, the envelope detector extracts the amplitude contour of the audio that will be used by the compressor to determine when to compress the signal’s gain. The response of the compressor is determined by the attack time and the release time of the envelope, with higher values resulting in a smoother envelope, and hence, a gentler response in the compressor. The compressor script is a MonoBehaviour component that can be attached to any GameObject. Make Weird Stuff in Unity Tutorial.

TwoBigEars: See through your ears! InAudio. This extension requires one license per seat Requires Unity 4.1.0 or higher. 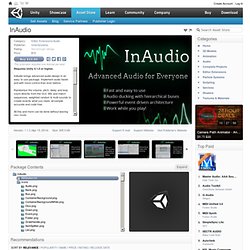 InAudio brings advanced audio design in an easy to use package. Implement audio faster and with more control than ever before. Randomize the volume, pitch, delay and loop count directly from the GUI. Mix and match sequences, weighted random & multi sounds to create exactly what you need, all sample accurate and code free. All this and more can be done without leaving play mode. Blog: Game Audio Scripting With Unity - Part 1, Game audio development platform revealed. 4 Comments...Post a commentoriginal story Doug Said... Where can we find the free version of the software? I only see a 30 day trial at the website. 04-Mar-14 08:28 AM Adam M Said...

The main objective of such interfacing is to have visual 3D coordinates dynamically mapped to sound-source positions in a virtual space. Csound's attributes may be accessed from within Unity's GUI, allowing non-expert Csound users to explore the power of the mentioned binaural 3D opcodes. The current text discusses the methods used for such interfacing, as well as explains its capabilities. I. The sounds of Tetrobot: from XACT to Unity. This article will expose how we handled the sounds and musics in Tetrobot and Co. using Unity Engine and some duct tape! But before we start, let me tell you that all the musics and sounds effects were crafted by our dear Yann “Morusque” van der Cruyssen! While reading this, you can listen to the Tetrobot and Co. soundtrack on Morusque’s Bandcamp. XACT as a source of inspiration Before building Tetrobot and Co. with Unity, our previous game (Blocks That Matter) was powered by the Xna Framework.

Wwise Unity Integration Tutorial. Master Audio. Master Audio 2.7 Unity plugin - streamlined workflow & improved pro mixer! Game Audio in Unity. My colleague, Glen Joyner, and I presented on game audio in unity at the East Coast Game Conference last month. We discussed the strengths and weaknesses of the engine, along with how to bend the engine’s audio component to your will. Maybe that’s an overstatement, but you can, at the very least, make Unity do some pretty cool stuff. Glen wrote a post for DesigningSound.org that goes more in depth in the programming side, but I can give you a brief overview (look for the post later this month).

If you have the budget for any middleware (Wwise, FMOD, Fabric), just ignore me completely and bask in the glow of your budgetary superiority. Unity: Controlling game elements with sound. I’ve been playing around with Unity 3D in my spare time. Verdict? Lots of fun! Thankfully I’ve found it easy to understand because of the many years I spent as a teenager watching my brother work in 3D Studio Max and Maya. Ep 29 — Three Times The Charm. The IGDATC Podcast Episode 29, Three Times the Charm After a typical delay, we’re happy to release our latest podcast ramblings. Ryan, Tori and Martin discuss various game related happenings, movies, and the upcoming next generation consoles. Zeh/usfxr. How to Integrate Wwise into Unity. Hey there folks. FreeGameCode/Unity/DynamicMusic at master · charliehuge/FreeGameCode. A look at Unity and Sound Development « Mega Pickle. Impulsonic. Tomasz Kaye's Blog - Richer audio in Unity with Fabric. Part 1.

One simple tool can make your work life better. A review of the month of March in regards to the media coverage of video games and video game platforms. Simple AudioManager code for your Unity3d project. David Furuya » Scripting Footstep Sounds in Unity. How to Integrate Wwise into Unity. Unite 2013 - Real-time Audio Synthesis with SuperCollider. Procedural Audio in Unity3D. Procedural audio with Unity. AudioGaming offers an advanced tutorial on procedural audio, using HolyShield as a case study In the video games world procedural audio refers to the computational process of generating audio from nothing, or almost nothing. Plugins (Pro/Mobile-Only Feature)

Unity has extensive support for Plugins, which are libraries of native code written in C, C++, Objective-C, etc. Plugins allow your game code (written in Javascript, C# or Boo) to call functions from these libraries. Jorgegarcia/UnityFreesound. Zaikman/UnityPublic. Procedural Audio in Unity's Bootcamp Demo (v 1.0) (Non-binauralisation version) Tazman-Audio. ModularSynth Extension. ModularSynth is an exciting new framework that allows you to effortlessly create new types of audio sources and effects by connecting audio modules together in a visual way.

It is available with a number of modules such as generators, samplers, effects, displays, and control panels ready to be used out of the box. It is easy to create new modules yourself and expand it to suit your needs. Though ModularSynth integrates with Fabric seamlessly, taking advantage of it’s powerful features such as event system, hierarchy, runtime parameter control, dynamic mixer etc, it can also be used on its own. Konsoll 2013: Making a great sounding Unity game using Fabric. Unite 2013 - Real-time Audio Synthesis with SuperCollider. Asset Store. This extension requires one license per seat Requires Unity 4.1.2 or higher. Download NI mate (v1.16) Download, install and run NI mate (please read the documentation if you have previously used a your sensor device, for example the Microsoft Kinect, with your PC) and attach your device via USB. Before you can start using NI mate, you will need to either purchase a commercial license or register your Kinect for a free trial license.