Classical Music Highlight: Follow Your Dreams Into Space. Behind The Music - Gears of War 2. As a world-renowned composer and an incredibly in-demand orchestrator, Penka Kouneva is a favorite of ours. 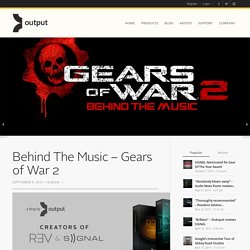 Not only is she successful in film and TV, Penka has become a force to reckon with when it comes to games. She’s put her touch on uber-popular games like Gears of War 2 & 3, Prince of Persia: The Forgotten Sands, and Transformers: Revenge of the Fallen. We thought it would be fun to pick her brain and get the gritty details of what it takes to develop a great game theme. And to demonstrate, she was awesome enough to analyze the Gears of War 2 theme “Hope Runs Deep” by her frequent collaborator, star composer Steve Jablonsky. We hope you enjoy our new and ongoing series: Main Theme Analysis. Penka Kouneva and a composer's 'authentic voice' Pierce Huxtable - Composer Penka Kouneva courtesy the artist A recent panel at GDC (Game Developers Conference) may have raised more questions than it answered. 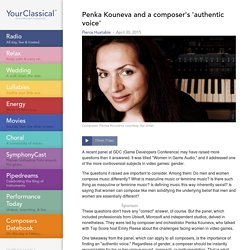 It was titled "Women in Game Audio," and it addressed one of the more controversial subjects in video games: gender. The questions it raised are important to consider. Among them: Do men and women compose music differently? These questions don't have any "correct" answer, of course. One takeaway from the panel, which can apply to all composers, is the importance of finding an "authentic voice. " SoundWorks Collection Interview Series - Composer Penka Kouneva. This week we spoke with Composer Penka Kouneva at this years Game Developers Conference in San Francisco. 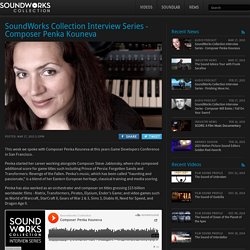 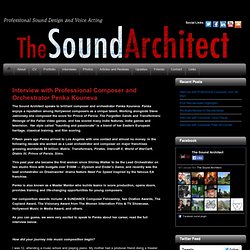 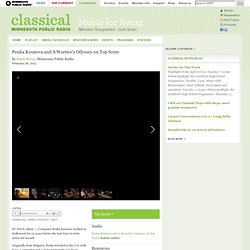 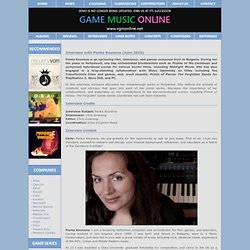 During her ten years in Hollywood, she has orchestrated blockbusters such as Pirates of the Caribbean and composed hybridised scores for various horror titles, including Midnight Movie. She has also engaged in a long-standing collaboration with Steve Jablonsky on titles including the Transformers films and games, and, most recently, Prince of Persia: The Forgotten Sands for PlayStation 3, Xbox 360, and PC. In this interview, Kouneva discusses her breakthrough works in Hollywood. She reflects the amount of creativity and intricacy that goes into each of her score works, discusses the importance of her collaborations, and elaborates on her contributions to the abovementioned scores, including Prince of Persia: The Forgotten Sands whose soundtrack has just been released. 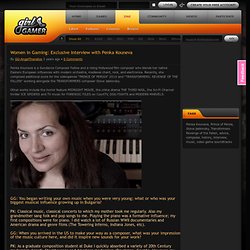 Recently, she composed additional score for the videogames “PRINCE OF PERSIA” 2010 and “TRANSFORMERS: REVENGE OF THE FALLEN” working alongside the TRANSFORMERS composer Steve Jablonsky. Other works include the horror feature MIDNIGHT MOVIE, the crime drama THE THIRD NAIL, the Sci-Fi Channel thriller ICE SPIDERS and TV music for FORENSIC FILES on CourtTV, DOG FIGHTS and MODERN MARVELS. GG: You began writing your own music when you were very young; what or who was your biggest musical influence growing up in Bulgaria? PK: Classical music, classical concerts to which my mother took me regularly. PK: I had orchestrated on the first Transformers game (2007), then on Gears of War 2 and The Sims 3. Interview: Penka Kouneva » Blog Archive » GamingAngels. 22Feb Penka Kouneva is a Sundance Composer Fellow and a rising Hollywood film composer who blends her native Eastern European influences with modern orchestra, medieval chant, rock, and electronica. 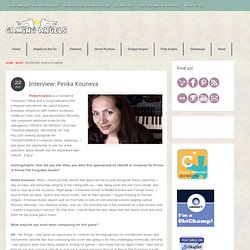 Recently, she composed additional score for the videogames “PRINCE OF PERSIA” 2010 and “TRANSFORMERS: REVENGE OF THE FALLEN” working alongside the TRANSFORMERS composer Steve Jablonsky. I was given the opportunity to ask her a few questions about herself and her experience with Ubisoft. Enjoy! GamingAngels: How did you feel when you were first approached by Ubisoft to compose for Prince of Persia The Forgotten Sands? Penka Kouneva: When I found out that Ubisoft had approved me to work alongside Steve Jablonsky I was ecstatic and remember jumping to the ceiling with joy. What inspired you most when composing for this game? Starting piano lessons at age 6, when did you first feel music was your passion? At the age of 12, I had an opportunity to compose incidental music for children’s theater. Interview with composer Penka Kouneva. Hi Penka, thank you for taking the time to do this interview. 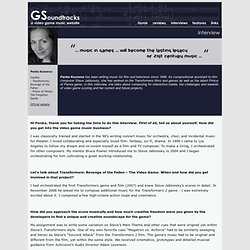 First of all, tell us about yourself. How did you get into the video game music business? Inteview with Penka Kouneva. I Am Entertainment Magazine interviews Penka Kouneva - Film, TV, Gaming Composer & Orchestrator. Penka Kouneva is a rising Hollywood film composer who blends her native Eastern European influences with modern orchestra, medieval chant, rock, and electronica. 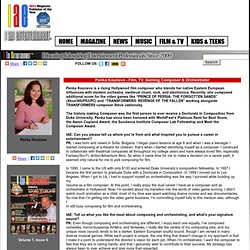 Recently, she composed additional score for the video games like “PRINCE OF PERSIA: THE FORGOTTEN SANDS” (Xbox360/PS3/PC) and “TRANSFORMERS: REVENGE OF THE FALLEN” working alongside TRANSFORMERS composer Steve Jablonsky. The history making Composer was the first person to ever receive a Doctorate in Composition from Duke University. Penka has since been honored with WorldFest’s Platinum Remi for Best Score, the Aaron Copland Award, the Sundance Institute Composer Lab Fellowship and Meet the Composer Award. IAE: Can you please tell us where you’re from and what inspired you to pursue a career in entertainment? PK: I was born and raised in Sofia, Bulgaria. In 1990, I came to the US with only $130 and entered Duke University’s composition fellowship. IAE: What was the first project you worked on when you arrived in Hollywood? Scorefront: Composer Penka Kouneva. The Quick Eight: 1. What was your first memory of music? My grandmother sang about 50 songs to me (nursery rhymes, folk tunes, pop songs).

Then around 1st grade I discovered Grieg’s Piano Concerto No. 1 played by Svyatoslav Richter. I remember bonding incredibly strongly with that piece, imagining paintings, stories. 2. Composer interview: Penka Kouneva on horror and video game soundtracks (Pt. 2) - National Soundtracks. Well, you also had additional work with MIDNIGHT MOVIE that a lot of composers don’t have to deal with, and that is the fact that it was a movie within a movie, so you essentially scored two films at the same time.

Yes, exactly, my chore was to score two films. The “old” movie that they go to see takes itself seriously; it’s not camp or any of those really flamboyant and colorful 1970s movies. This is actually black and white, so it has a somber tone to it. It obviously reminds us a bit of TEXAS CHAINSAW MASSACRE. My goal was to approach it in a very earnest way, while making it sound very dated. One of my favorite parts of being a composer is doing that kind of research.

Well, I think part of the charm of those older horror scores is that a lot of the composers’ creativity blossomed out of the fact that they had to work within minimal to no budgets, so they were forced to use whatever was around them to create their sounds. Composer Interview: Penka Kouneva.