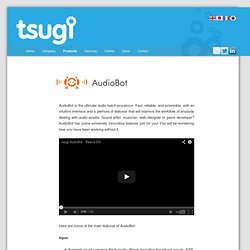 Fast, reliable, and extensible, with an intuitive interface and a plethora of features that will improve the workflow of anybody dealing with audio assets. Sound artist, musician, web designer or game developer? AudioBot has some extremely innovative features just for you! You will be wondering how you have been working without it. Here are some of the main features of AudioBot: Input Supports most common file formats: Wave (including broadcast wave), AIFF, MP3, Ogg Vorbis, Flac …Reads and preserves metadata.Imports / exports list of files (drag and drop, text files, Excel files…).Uses filters on directories (based on audio file characteristics, last modification date, size…).Detects duplicates and removes them if needed.Waveform visualization and playback.Sets watchers on directories, so files are automatically processed when added or modified.Possibility to write custom import plug-ins for proprietary formats.

Processing Output. DSP Anime. Making Accessible Games with Twine Audio. I’ve written about both Twine and Twine 2 as platforms that are very friendly to completely new developers and those who haven’t previously programmed, but Twine is also a platform that can offer accessibility from the user end. 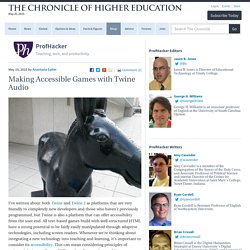 All text-based games build with well-structured HTML have a strong potential to be fairly easily manipulated through adaptive technologies, including screen readers. Whenever we’re thinking about integrating a new technology into teaching and learning, it’s important to consider its accessibility. This can mean considering principles of universal design, as George Williams has discussed several times on ProfHacker in the past, as well as the needs of specific user groups. Games as a whole are all over the place in their accessibility, which can make some games less usable for many users. Recently I’ve been working with a team of students and faculty specifically building a game for low-vision users.

Have you built or taught with a great accessible game? Twine Audio. AudioKit Blog. Announcing Version 2.1! 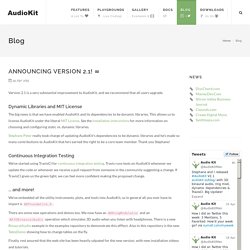 ∞ Version 2.1 is a very substantial improvement to AudioKit, and we recommend that all users upgrade. Dynamic Libraries and MIT License The big news is that we have enabled AudioKit and its dependencies to be dynamic libraries. This allows us to license AudioKit under the liberal MIT License. Stéphane Peter really took charge of updating AudioKit's dependencies to be dynamic libraries and he's made so many contributions to AudioKit that he's earned the right to be a core team member. Continuous Integration Testing We've started using TravisCI for continuous integration testing. CRI ADX2 - CRI Middleware, Inc. What's New Feature-rich/cross-platform audio solution Experience the unprecedented new next generation sound designing. 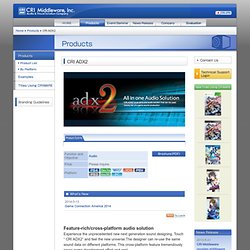 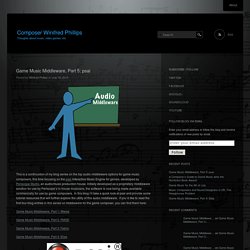 Initially developed as a proprietary middleware solution for use by Periscope’s in-house musicians, the software is now being made available commercially for use by game composers. In this blog I’ll take a quick look at psai and provide some tutorial resources that will further explore the utility of this audio middleware. If you’d like to read the first four blog entries in this series on middleware for the game composer, you can find them here: 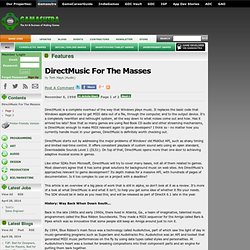 It replaces the basic code that Windows applications use to get MIDI data out of a file, through the computer, and to the output device. It's a completely rewritten and rethought system, all the way down to what noises come out and how. Has it arrived too late? Now that so many games are using Red Book CD audio and other streaming mechanisms, is DirectMusic enough to make MIDI relevant again to game developers? I think so - no matter how you currently handle music in your games, DirectMusic is definitely worth checking out. DirectMusic starts out by addressing the major problems of Windows' old MidiOut API, such as shaky timing and limited real-time control. Like other SDKs from Microsoft, DirectMusic will try to cover many bases, not all of them related to games.

This article is an overview of a big piece of work that is still in alpha, so don't look at it as a review. History: Way Back When Down South... Impulsonic.com. IrrKlang - an audio library for C++, C# and .NET and high level 3D and 2D sound engine. Overview irrKlang is a high level 2D and 3D cross platform (Windows, Mac OS X, Linux) sound engine and audio library which plays WAV, MP3, OGG, FLAC, MOD, XM, IT, S3M and more file formats, and is usable in C++ and all .NET languages (C#, VisualBasic.NET, etc). 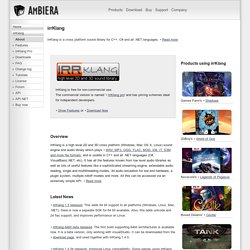 It has all the features known from low level audio libraries as well as lots of useful features like a sophisticated streaming engine, extendable audio reading, single and multithreading modes, 3d audio emulation for low end hardware, a plugin system, multiple rolloff models and more. All this can be accessed via an extremely simple API. Read more Latest News irrKlang 1.5 released. IrrKlang 64bit beta released. IrrKlang 1.4.0b released. IrrKlang - an audio library for C++, C# and .NET and high level 3D and 2D sound engine. IrrKlang Features irrKlang is a powerful high level API for playing back sound in 3D and 2D applications like games, scientific visualizations and multimedia applications. irrKlang is free for non commercial use. 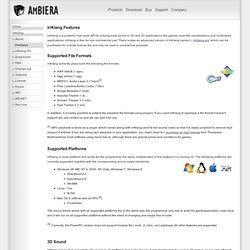 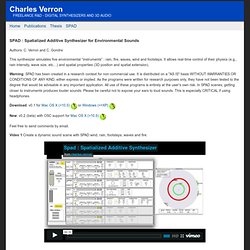 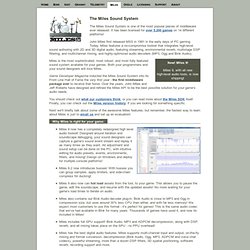