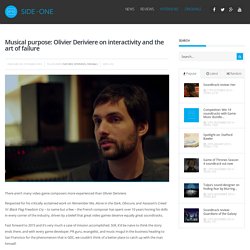 Respected for his critically acclaimed work on Remember Me, Alone in the Dark, Obscure, and Assassin’s Creed IV: Black Flag Freedom Cry – to name but a few – the French composer has spent over 10 years honing his skills in every corner of the industry, driven by a belief that great video games deserve equally great soundtracks. Fast forward to 2015 and it’s very much a case of mission accomplished. Still, it’d be naive to think the story ends there, and with every game developer, PR guru, evangelist, and music mogul in the business heading to San Francisco for the phenomenon that is GDC, we couldn’t think of a better place to catch up with the man himself.

Side One: I’m interested to hear about the creative process behind your scores, particularly with Remember Me having such an experimental approach to audio. Remember Me trailer goes behind the music. Olivier Deriviere (Composer) - Interview. For more than a decade, Olivier Deriviere has been scoring music for video games. 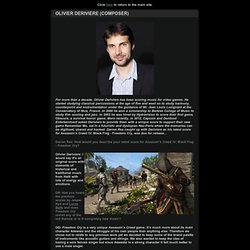 He started studying classical percussions at the age of five and went on to study harmony, counterpoint and instrumentation under the guidance of Mr. Jean Louis Luzignant at the Conservatory of Nice, France. In 2000 he won a scholarship to Berklee College of Music to study film scoring and jazz. In 2003 he was hired by Hydravision to score their first game, Obscure, a survival horror game. More recently, in 2012, Capcom and Dontnod Entertainment asked Deriviere to provide them with a unique score to support their new game Remember Me, set in a futuristic and dystopian Neo-Paris where the memories can be digitised, shared and hacked. Darren Rea: How would you describe your latest score for Assassin's Creed IV: Black Flag - Freedom Cry? Olivier Deriviere: I would say it’s an original score with elements of historical and traditional music from Haiti with lots of energy and emotions. 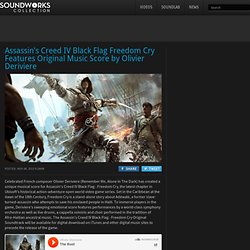 Set in the Caribbean at the dawn of the 18th Century, Freedom Cry is a stand-alone story about Adéwalé, a former slave-turned-assassin who attempts to save his enslaved people in Haiti. To immerse players in the game, Deriviere's sweeping emotional score features performances by a world-class symphony orchestra as well as live drums, a cappella soloists and choir performed in the tradition of Afro-Haitian ancestral music. The Assassin's Creed IV Black Flag - Freedom Cry Original Soundtrack will be available for digital download on iTunes and other digital music sites to precede the release of the game. Born a slave, Adéwalé found freedom as a pirate aboard the Jackdaw where he became Edward Kenway's second-in-command.

Olivier Deriviere Scores Assassin's Creed IV: Freedom Cry. November 21, 2013 Copy and paste the HTML below to embed this audio onto your web page. 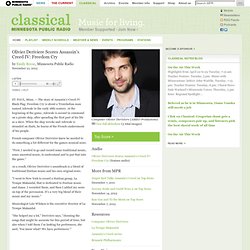 Audio player code: sponsor: ST. PAUL, Minn. — The story of Assassin's Creed IV Black Flag: Freedom Cry is about a Trinidadian man named Adewale in the early 18th century. French composer Olivier Derivière knew he needed to do something a bit different for the games musical score. "First, I needed to go and record some traditional music, some ancestral music, to understand and to put that into the game. " As a result, Olivier Derivière's soundtrack is a blend of traditional Haitian music and his own original score.

"I went to New York to record a Haitian group, La Troupe Makandal, that is dedicated to Haitian music and dance. Musicologist Lois Wilcken is the executive director of La Troupe Makandal. "She helped me a lot," Derivière says, "choosing the songs that might be accurate for this period of time, but also when I told them I'm looking for performers, she said, 'You know what? Olivier Derivier and Remember Me on Top Score. May 24, 2013 Copy and paste the HTML below to embed this audio onto your web page. 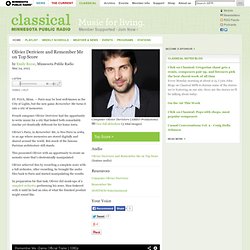 Audio player code: ST. PAUL, Minn. — Paris may be best well-known as the City of Lights, but the new game Remember Me turns it into a city of memories. Remember Me and the Aphex Twin connection. Composer Olivier Deriviere drew on Aphex Twin’s surreal music when creating Remember Me’s soundtrack, resulting in an organic soundscape of glitches and risk. 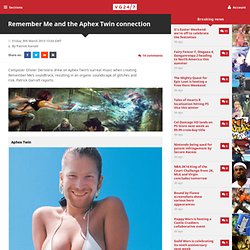 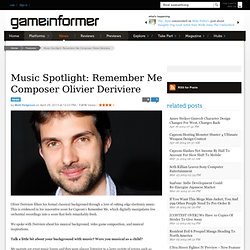 This is evidenced in his innovative score for Capcom's Remember Me, which digitally manipulates live orchestral recordings into a score that feels remarkably fresh. We spoke with Deriviere about his musical background, video game composition, and musical inspirations. Talk a little bit about your background with music? Were you musical as a child? Alone in the Dark Music Composer interview by Gamereactor. Horror Video Games - News and Information -Olivier Deriviere talks Alone in the Dark and more. Alone In The Dark Composer Q&amp;A. Composer Olivier Deriviere has been lurking behind the scenes for sometime now, crafting intricate and immersive scores for a variety of projects over the years. 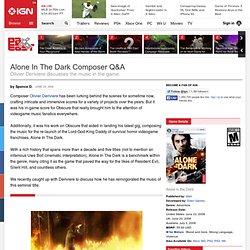 But it was his in-game score for Obscure that really brought him to the attention of videogame music fanatics everywhere. Additionally, it was his work on Obscure that aided in landing his latest gig, composing the music for the re-launch of the Lord-God-King Daddy of survival horror videogame franchises, Alone In The Dark. With a rich history that spans more than a decade and five titles (not to mention an infamous Uwe Boll cinematic interpretation), Alone In The Dark is a benchmark within the genre, many citing it as the game that paved the way for the likes of Resident Evil, Silent Hill, and countless others.

We recently caught up with Deriviere to discuss how he has reinvigorated the music of this seminal title. IGN Music: How did you come to be attached to Alone In The Dark? Interview with Alone in the Dark Composer Olivier Deriviere—OCmodshop. OCModShop had a chance to sit down with Olivier Deriviere. 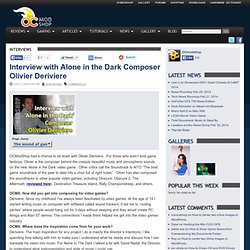 For those who aren’t avid game fanboys, Olivier is the composer behind the creepily beautiful music and atmospheric sounds on the new ‘Alone in the Dark’ video game. Other critics call the Soundtrack to AITD “The best game soundtrack of the year to date hits a choir full of right notes”. Oliver has also composed the soundtracks to other popular video games, including Obscure, Obscure 2: The Aftermath (reviewed here), Destination Treasure Island, Rally Championsheep, and others. 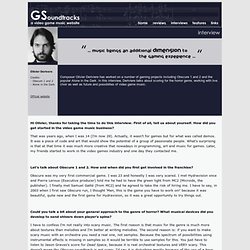 First of all, tell us about yourself. How did you get started in the video game music business? That was years ago, when I was 14 (I'm now 29). Actually, it wasn't for games but for what was called demos. It was a piece of code and art that would show the potential of a group of passionate people. Interview de Olivier Derivière. LATEST PROJECTS - Olivier Deriviere, Video Game ScoringOlivier Deriviere, Video Game Scoring. Remember Me trailer goes behind the music.