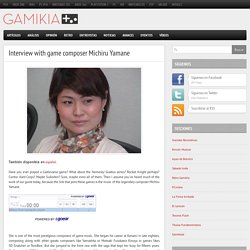 Have you ever played a Castlevania game? What about the Nemesis/ Gradius series? Rocket Knight perhaps? Contra: Hard Corps? Maybe Suikoden? She is one of the most prestigious composers of game music. The interview could not be accomplished without the invaluable help in the questions and translations of Jose Manuel Iniguez (Director of Akaoni Studio), Gryzor87, Chiyoe Ishihara, IO and Javier Cadenas. In the time you joined Konami, videogames were very different than now, composers did not have the resources they have nowadays to make the music they want.

When I graduated from University, it was time for me to consider which way I should take. I think I’d rather be composing or arranging music rather than teaching. Are you a gamer? I do like playing games. Nowadays, I rarely play anything, but I like games such as ICO or the Professor Layton or Ace Attorney series, which require the player to think. Yes, I think so. I’d say a good point is the stable income. A classic interview with Castlevania composer Michiru Yamane. In this reprint from the October 2006 issue of Game Developer magazine, Michiru Yamane opens up about her musical education and her work on a few classic Castlevania games. 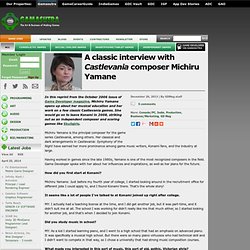 She would go on to leave Konami in 2008, striking out as an independent composer and scoring games like Skullgirls. Michiru Yamane is the principal composer for the game series Castlevania, among others. Her classical and dark arrangements in Castlevania: Symphony of the Night have earned her more prominence among game music writers, Konami fans, and the industry at large. Having worked in games since the late 1980s, Yamane is one of the most recognized composers in the field. Game Developer spoke with her about her influences and inspirations, as well as her plans for the future. How did you first start at Konami? Michiru Yamane: Just before my fourth year of college, I started looking around in the recruitment office for different jobs I could apply to, and I found Konami there. Skullgirls Special Announcement: Michiru Yamane! Skullgirls Behind the Scenes Interview with Michiru Yamane. Interview with Michiru Yamane (February 2010) Michiru Yamane is a much-loved composer known for her work on the Castlevania series. 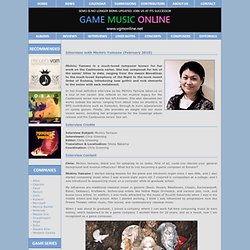 She has composed for ten of the series' titles to date, ranging from the classic Bloodlines to the much-loved Symphony of the Night to the more recent Order of Ecclesia, introducing new gothic and rock elements to the series with each instalment. In her most definitive interview so far, Michiru Yamane takes us on a tour of her career. She reflects on her musical legacy for the Castlevania series now she has left Konami. She also discusses her works outside the series, ranging from debut roles on shooters, to RPG contributions such as Suikoden, through to even appearances on sports games. Michiru Yamane Interview: October 2012 - Part 1. Michiru Yamane Interview: October 2012 - Part 2. Here is part 2 of the transcript from the interview that 1up.com did with legendary Castlevania music composer Michiru Yamane last week. 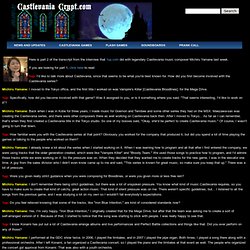 If you are looking for part 1, click here to read 1up: I'd like to talk more about Castlevania, since that seems to be what you're best known for. How did you first become involved with the Castlevania series? Michiru Yamane: I moved to the Tokyo office, and the first title I worked on was Vampire's Killer [Castlevania Bloodlines], for the Mega Drive. 1up: Specifically, how did you become involved with that game? Chiptuned: 1UP's Game Music Blog : The Staying Power of Michiru Yamane's Symphony of the Night. Delicacy and strength practically lept from the art and soundtrack of Castlevania: Symphony of the Night in a way that captured the imagination of many players. 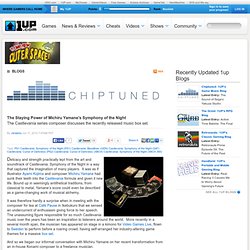 It was as if illustrator Ayami Kojima and composer Michiru Yamane had sunk their teeth into the Castlevania formula and given it new life. Bound up in seemingly antithetical traditions, from classical to metal, Yamane’s score could even be described as a game-changing work of musical alchemy. It was therefore hardly a surprise when in meeting with the composer for tea at Café Pause in Ikebukuro that we sensed an undercurrent of enthusiasm giving force to her speech. The unassuming figure responsible for so much Castlevania music over the years has been an inspiration to listeners around the world. And so we began our informal conversation with Michiru Yamane on her recent transformation from an in-house Konami composer to a freelance musician. 1UP: Would you consider yourself friends with Kojima-san?

That's certainly the case. Mini-interview: michiru yamane/koji igarashi. I was transcribing an old interview for a proper publication (maybe even the one I work for!?) 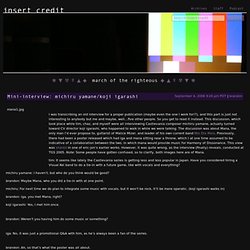 , and this part is just not interesting to anybody but me and maybe, well…five other people. So you get to read it instead. This discussion, which took place while tim, chaz, and myself were all interviewing Castlevania composer michiru yamane, actually turned toward CV director koji igarashi, who happened to walk in while we were talking. The discussion was about Mana, the only man I’d ever propose to, guitarist of Malice Mizer, and leader of his own current band Moi Dix Mois. Previously, there had been a poster released which had iga and mana sitting near a throne, which I at one time assumed to be indicative of a collaboration between the two, in which mana would provide music for Harmony of Dissonance.