Marty O'Donnell Beep interview. Ex-Bungie composer Marty O'Donnell wins epic legal fight with former bosses. Marty O’Donnell, the composer who created the music for the Halo and Destiny video games, has won his case in a legal battle with his former employer Bungie. 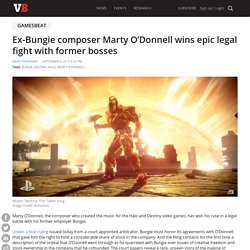 Under a final ruling issued today from a court-appointed arbitrator, Bungie must honor its agreements with O’Donnell that gave him the right to hold a considerable share of stock in the company. And the filing contains for the first time a description of the ordeal that O’Donnell went through as he quarreled with Bungie over issues of creative freedom and stock ownership in the company that he cofounded. The court papers reveal a rare, unseen story of the making of Destiny, and the internal struggles that happened between Activision, the publisher, and Bungie, the developer of the game that is now played by millions. The arbitrator found that Bellevue, Wash. From VentureBeat Gaming is in its golden age, and big and small players alike are maneuvering like kings and queens in A Game of Thrones. 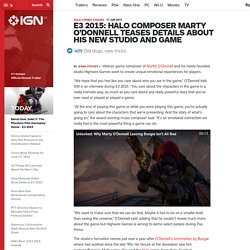 By Jenna PitcherVeteran game composer of Martin O’Donnell and his newly founded studio Highwire Games want to create unique emotional experiences for players. “We hope that you feel like you care about who you are in the game,” O’Donnell told IGN in an interview during E3 2015. “You care about the characters in the game in a really intimate way, as much as you care about any really powerful story that you’ve ever read or played or played a game. “At the end of playing this game or while you were playing this game, you’re actually going to care about the characters that we’re presenting. And the story of what’s going on," the award-winning music composer said. "We want to make sure that we can do that. Q&A: Making music with former Bungie composer Marty O'Donnell.

Composer Marty O'Donnell is perhaps best known in our industry for his work on the iconic score of Bungie's Halo series, though he's been working with the company since helping to produce the music for Myth: The Fallen Lords back in 1997. 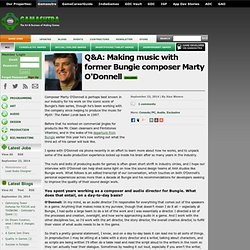 Before that he worked on commercial jingles for products like Mr. Clean cleansers and Flintstones Vitamins, and in the wake of his departure from Bungie earlier this year he's now sorting out what the third act of his career will look like. I spoke with O'Donnell via phone recently in an effort to learn more about how he works, and to unpack some of the audio production experience locked up inside his brain after so many years in the industry. The nuts and bolts of producing audio for games is often given short shrift in industry circles, and I hope our interview with O'Donnell can help shed some light on how the sound design teams at AAA studios like Bungie work. You spent years working as a composer and audio director for Bungie. Work-for-hire hits the wrong notes. On October 7, Marty O'Donnell will keynote the GameSoundCon game music and sound design conference. 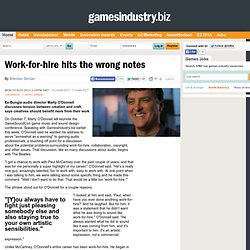 Speaking with GamesIndustry.biz earlier this week, O'Donnell said he wanted his address to serve "somewhat as a warning" to gaming audio professionals, a touching off point for a discussion about the potential problems surrounding work-for-hire, collaboration, copyright, and other issues. That discussion, like so many discussions about audio, begins with The Beatles. "I got a chance to work with Paul McCartney over the past couple of years, and that was for me personally a super highlight of my career," O'Donnell said.

"He's a really nice guy, amazingly talented, fun to work with, easy to work with. At one point when I was talking to him, we were talking about some specific thing and he made this comment: "Well I don't want to do that. Music Of The Spheres: The Collaborative Soundscape Of Destiny - Features. Audio director and lead composer Marty O'Donnell is leaving the music of Halo behind and building a whole new aural world. 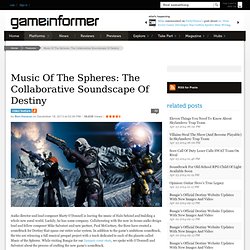 Luckily, he has some company. Collaborating with the now in-house audio design lead and fellow composer Mike Salvatori and new partner, Paul McCartney, the three have created a soundtrack for Destiny that spans our entire solar system. Bungie composer Marty O'Donnell on the music of Destiny, collaborating with Paul McCartney. Expect something a little different from the musical score to Bungie's next video game, Destiny. 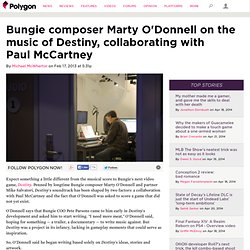 Penned by longtime Bungie composer Marty O'Donnell and partner Mike Salvatori, Destiny's soundtrack has been shaped by two factors: a collaboration with Paul McCartney and the fact that O'Donnell was asked to score a game that did not yet exist. O'Donnell says that Bungie COO Pete Parsons came to him early in Destiny's development and asked him to start writing. "I need more meat," O'Donnell said, hoping for something — a trailer, a documentary — to write music against.

But Destiny was a project in its infancy, lacking in gameplay moments that could serve as inspiration. So, O'Donnell said he began writing based solely on Destiny's ideas, stories and artwork. The result was nearly an hour of music written to foster inspiration within the development team. Destiny's early score was recorded at Abbey Road Studios. "He didn't only want to do Paul McCartney music. Sound Byte: Meet the Composer - Martin O'Donnell. Behind the Games: Meet the Composers - Martin O'Donnell.

By: , GameSpot - Posted on September 18, 2009 Everyone is bound to recognize at least one melody from a popular video game, but how often do people know the creative maestro responsible for it? 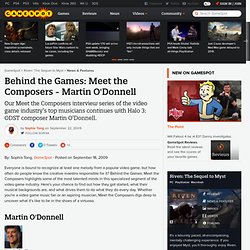 Behind the Games: Meet the Composers highlights some of the most talented minds in this specialized segment of the video game industry. Here's your chance to find out how they got started, what their musical backgrounds are, and what drives them to do what they do every day. Whether you're a video game music fan or an aspiring musician, Meet the Composers digs deep to uncover what it's like to be in the shoes of a virtuoso. Last.fm Profile: The Sound and Music of HALO: REACH.

Synopsis Halo: Reach takes place in late 2552, during the Covenant invasionof the Human colony world Reach, which also serves as the main military center of the UNSC. 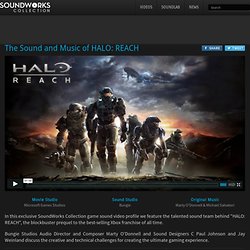 The game follows Noble Team, a six-man special operations unit of one SPARTAN-II and five SPARTAN-III commandos. The player assumes the role of the team's newest member, SPARTAN-B312 or "Noble Six" and will be defending Reach from its ultimate downfall at the hands of the Covenant. Over the course of the campaign, the players will visit various locales on and above planet Reach, including remote civilian homesteads, high-tech ONI facilities such as Sword Base, the metropolitan city of New Alexandria, as well as a segment of space combat in a Sabre fighter. 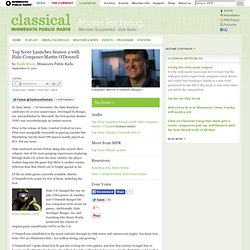