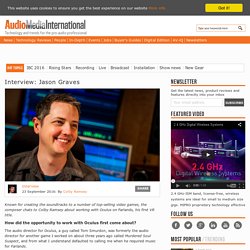 Known for creating the soundtracks to a number of top-selling video games, the composer chats to Colby Ramsey about working with Oculus on Farlands, his first VR title. How did the opportunity to work with Oculus first come about? The Music of Far Cry Primal with Composer Jason Graves. In this exclusive SoundWorks Collection video profile we feature Composer Jason Graves who created an emotionally provocative soundtrack made out of wood, bones, rocks and sweat – this is what a mammoth rushing at you would sound like! 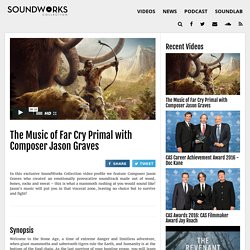 Jason’s music will put you in that visceral zone, leaving no choice but to survive and fight! Synopsis Welcome to the Stone Age, a time of extreme danger and limitless adventure, when giant mammoths and sabretooth tigers rule the Earth, and humanity is at the bottom of the food chain. As the last survivor of your hunting group, you will learn to craft a deadly arsenal, fend off fierce predators, and outsmart enemy tribes to conquer the land of Oros and become the apex predator. You will play as Takkar, a seasoned hunter and the last surviving member of your group. This isn’t the Stone Age you thought you knew. Until Dawn Feature with Composer, Jason Graves & Audio Director, Barney Pratt. “When eight friends are trapped on a remote mountain retreat and things quickly turn sinister, they start to suspect they aren’t alone.” 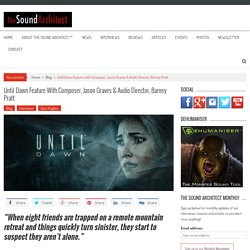 Until Dawn is the recent PS4 interactive horror release, that is a very unique twist on the traditional horror tropes that will excite horror fans around the world. We speak to Audio Director, Barney Pratt, and Composer, Jason Graves about the project. Thank you very much to both Barney and Jason for talking to us about the PS4 Exclusive horror title from Supermassive Games, Until Dawn. The Art of Noise: Incorporating Aleatoric Techniques in Your Scores. Jason Graves on the art of game and movie soundtracking. Over the last 20 or so years, Jason Graves has scored soundtracks for some of the games world's biggest names, from Star Wars and Star Trek to the re-booted Tomb Raider and Dead Space. 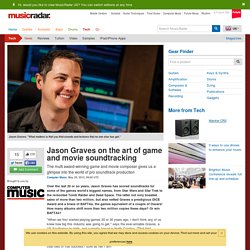 The latter not only boasted sales of more than two million, but also netted Graves a prestigious DICE Award and a brace of BAFTAs, the games equivalent of a couple of Oscars! How many albums shift more than two million copies these days? Or win BAFTAs? "When we first started playing games 20 or 30 years ago, I don't think any of us knew how big this industry was going to get," says the ever-amiable Graves, a US Southerner by birth, and currently based in North Carolina. "That first generation of teenagers is now in its 40s and still buying games; but, each ten years, the audience gets a whole new generation.

SoundWorks Collection Interview Series - Composer Jason Graves. This week we spoke with Academy Award-winning (BAFTA) composer Jason Graves who has brought his passion for music to such game titles as THE ORDER: 1886 , EVOLVE, TOMB RAIDER and DEAD SPACE. 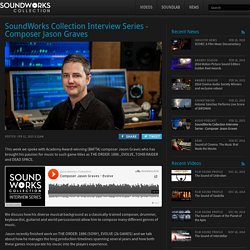 We discuss how his diverse musical background as a classically-trained composer, drummer, keyboardist, guitarist and world percussionist allow him to compose many different genres of music. Jason recently finished work on THE ORDER: 1886 (SONY), EVOLVE (2k GAMES) and we talk about how he manages the long production timelines spanning several years and how both these games incorporate his music into the players experience. Jason Graves is an Academy Award-winning (BAFTA) composer who has brought his passion for music to projects such as THE ORDER: 1886 (SONY), EVOLVE (2k GAMES), TOMB RAIDER (SQUARE ENIX) and DEAD SPACE (EA). He is particularly enthusiastic about illustrating a project’s story and character arcs through the power of music. Episode #224: Evolve with Jason Graves. If you’re assembling an orchestra to play Evolve’s soundtrack, you will need the following: pencils, bongos, a pizza box, a pencil can, the tray at the bottom of a bird cage, a roller chair… and a lot of imagination. 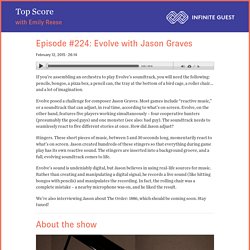 Evolve posed a challenge for composer Jason Graves. Most games include “reactive music,” or a soundtrack that can adjust, in real time, according to what’s on screen. Evolve, on the other hand, features five players working simultaneously – four cooperative hunters (presumably the good guys) and one monster (see also: bad guy). The soundtrack needs to seamlessly react to five different stories at once. The Music of Order 1866 by Composer Jason Graves. Official Site of Evolve the Game. Composer Interview: Jason Graves. Thanks for taking the time to chat with us Jason. 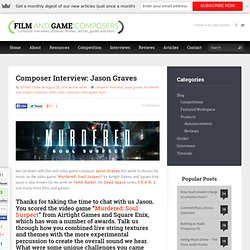 You scored the video game “Murdered: Soul Suspect” from Airtight Games and Square Enix, which has won a number of awards. Talk us through how you combined live string textures and themes with the more experimental percussion to create the overall sound we hear. What were some unique challenges you came across when scoring the game? The game takes place in a parallel world called Dusk and you are a ghost attempting to solve your own murder. So what would music in this universe sound like? The percussion was really more just an extension of what I do naturally, being a percussionist who is easily bored and always looking for something new to hit.

Graves...Jason Graves: The Man Behind The Musical Voice Of Murdered:Soul Suspect - New York NY. Games have become a major outlet for composers showcasing their immense and at times, severely underappreciated talents. 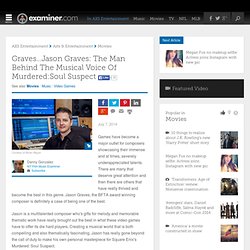 There are many that deserve great attention and then there are others that have really thrived and become the best in this genre. Jason Graves, the BFTA award winning composer is definitely a case of being one of the best. Jason is a multitalented composer who's gifts for melody and memorable thematic work have really brought out the best in what these video games have to offer its die hard players. Creating a musical world that is both compelling and also thematically fascinating, Jason has really gone beyond the call of duty to make his own personal masterpiece for Square Enix's Murdered: Soul Suspect.

Hi Jason, how are you and thank you very much for granting me the time to conduct this interview with you today. JG: Totally my pleasure! Let’s talk about your recent work on the Airtight Games and SQUARE ENIX supernatural mystery thriller, Murdered: Soul Suspect. Interview with Professional Composer, Jason Graves. The Sound Architect speaks with incredible composer Jason Graves. 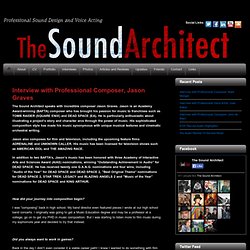 Jason is an Academy Award-winning (BAFTA) composer who has brought his passion for music to franchises such as TOMB RAIDER (SQUARE ENIX) and DEAD SPACE (EA). He is particularly enthusiastic about illustrating a project’s story and character arcs through the power of music. Jason Graves Interview 2013 (Tomb Raider) Deconstructing "Tomb Raider" with Composer Jason Graves. April 19, 2013 Copy and paste the HTML below to embed this audio onto your web page. 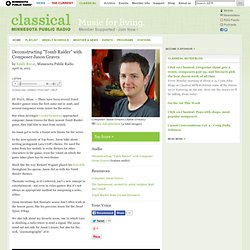 Audio player code: ST. PAUL, Minn. — There have been several Tomb Raider games since the first came out in 1996, and several composers wrote music for the series. But when developer Crystal Dynamics approached composer Jason Graves for their newest Tomb Raider game, they told him to start from scratch. So Jason got to write a brand new theme for the series.

In the new episode of Top Score, Jason talks about writing protagonist Lara Croft's theme. 'Tomb Raider’s' one-of-a-kind music, born in Raleigh. RALEIGH — It’s an ordinary roll of chicken wire, just like you’d buy at a hardware store (which is, in fact, where it came from). But where most people would see something to enclose chickens, Jason Graves saw a music-making device. Placing it on a metal trashcan lid in his home studio, he took up a bow to demonstrate. Sound Byte: Meet the Composer Behind Dead Space 2 - Jason Graves. Most of you probably wouldn't have guessed it, but award-winning composer Jason Graves began his musical career as a jazz drummer. As a classically trained percussionist--who is also proficient with the guitar and piano--Jason found his calling when he worked on the video game, King Arthur.

Previously known for his work with live orchestras extensively in film and television, Jason says that since then, he has never looked back because he prefers the creative freedom found working in games. Horror games rely heavily on atmosphere, sound design, and music to create a spine-tingling experience for the player. Dead Space did just that, and while some game soundtracks might not do much for your ears outside of their original purpose, the soundtrack to Dead Space and Dead Space 2 is worth listening to on its own.

While the harsh dissonant sounds may not be the most ear pleasing for someone looking to relax, the second album has some thematic elements that draw you into the music. Sound Byte: Meet the Composer Behind Dead Space 2 - Jason Graves. Dead Space 2 Meet the Composers: Jason Graves. Dead Space Composer Jason Graves on Top Score. May 10, 2011 Copy and paste the HTML below to embed this audio onto your web page. Audio player code: St. Paul, Minn. — Let's just cut to the chase - Dead Space and its sequel, Dead Space 2, are way too scary for me to play. The music doesn't help, and that's what makes it so incredible. It seems that John Williams and Steven Spielberg realized while putting together the film "Jaws" that less is more.

In this interview, Jason Graves discusses the music for the Dead Space franchise in more detail. He reflects his diverse inspirations for the score, whether visual, musical, or personal, and demonstrates how he created the music to be appealing both in context and as a soundtrack release. He also discusses some other developments of his career since we last talked to him in March 2010, including the music for Alpha Protocol and City of Heroes: Going Rogue. Interview Credits. Interview With Composer Jason Graves. With a name like Jason Graves, you know that you’ll be hearing music that will make you afraid, very afraid. Perhaps that’s why his gut-ripping contribution to DEAD SPACE made it one of gaming’s truly terrifying experiences, let alone that it happened to occur in the video game genre. Like Jerry Goldsmith given an overload of insanity-inducing adrenalin, Graves’ ferocious orchestra blasted, dismembered, and otherwise stomped to bloody goo the endless Necromorph creatures that were prowling the USG Ishimura, courtesy of a cultish “church” that unleashed a Lovecraftian “marker” on the universe.

Now with said spaceship and its accompanying planet destroyed at the end of EA Games’ DEAD SPACE, our hapless engineer Isaac finds himself waking up in the space city called The Sprawl. Interview with composer Jason Graves. Hi Jason, thank you for taking the time to do this interview. First of all, tell us about yourself.

How did you get started in the video game music business? Interview with Jason Graves.