Final Fantasy XV - 50 Minutes of Gameplay. Russian Square Plus! Edition. Imported - to the left. The Journal of Design Research. The significance placed on developing the generative system by Xenakis and Le Corbusier corroborates existing evidence of different approaches to designing by novice and expert designers (Kavakli and Gero, 2001; Kokotovich, 2002) Design grammars or generative systems operate at fundamental macro-levels of idea conception. 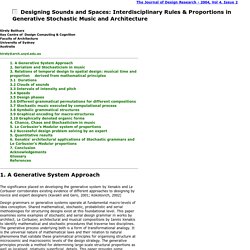 Shared mathematical, stochastic, probabilistic and serial methodologies for structuring designs exist at this foundational level. This paper examines some examples of stochastic and serial design grammar in works by architect, Le Corbusier, architectural and musical compositions by Iannis Xenakis to identify mathematical and stochastic procedures that traverse two disciplines. The generative process underlying both is a form of transformational analogy.

BioShock Infinite Easter Eggs and Secrets. Creating an Interactive Musical Experience for Fantasia: Music Evolved. Mass Effect 2 Best Interactive Score. PopCap's Guy Whitmore Talks Musical Trials And Triumphs On Peggle Blast. Here’s an unusual suggestion for playing Peggle Blast when it hits mobile devices on December 2: just for the heck of it, take a while to make a shot instead of rushing to the next one. 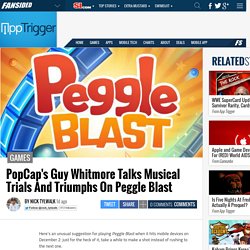 PopCap’s composer and Sr. Studio Audio Director Guy Whitmore won’t care. In fact he’d probably appreciate the fact that you took the time to enjoy the music, up to two minutes of it, that can play between shots. That might not sound like such a surprise for a franchise like Peggle that is synonymous with music, particularly of the grand, orchestral variety. It just wasn’t so simple to continue that heritage in Peggle Blast due to a very real constraint. That’s 50MB for the entire game, by the way. “That sounded like an impossible task at first,” Whitmore said recently by phone. Without getting too technical, it involved sampling. Or at least that’s how it was explained to this relatively musically uneducated writer. “If you’re playing quickly, the phrases will walk through quickly,” Whitmore said. 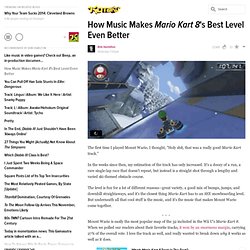 They do stuff like this, which is really technically awesome, and totally unnecessary but really adds something awesome to this experience which you would never notice on its own, and they don't run around flapping their gums about their amazing technical achievements. This took a lot of collaboration from different parts of the team really coming together in an amazing way, and to Nintendo it's just another part of the game. Who else out there is doing this? I mean, contrast this to a great AAA game like (I think we can all agree, anyway) The Last of Us. They touted great AI, not exactly an amazing technical marvel considering what's come before it, but in the previews the AI came together with the animation and mechanics in a great way and it got people excited to play this game.. and then when it came out, it was no big flop or anything, but the AI was demonstrably worse than the previews. How music helps make Mario Kart 8's best level even better. 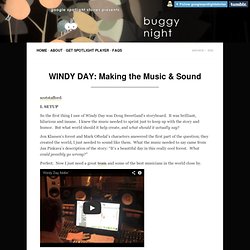 It was brilliant, hilarious and insane. I knew the music needed to sprint just to keep up with the story and humor. But what world should it help create, and what should it actually say? Jon Klassen’s forest and Mark Oftedal’s characters answered the first part of the question; they created the world, I just needed to sound like them. Perfect. A Windy Day - Motorola Spotlight Player. Rodain Joubert's Blog - Approaching Audio Puzzle Design (pt 1) The following blog post, unless otherwise noted, was written by a member of Gamasutra’s community. 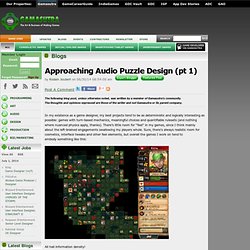 The thoughts and opinions expressed are those of the writer and not Gamasutra or its parent company. In my existence as a game designer, my best projects tend to be as deterministic and logically interesting as possible: games with turn-based mechanics, meaningful choices and quantifiable rulesets (and nothing where nuanced physics apply, thanks). There’s little room for “feel” in my games, since I think mainly about the left-brained engagements swallowing my players whole. Sure, there's always realistic room for cosmetics, interface tweaks and other feel elements, but overall the games I work on tend to embody something like this: Chibi-Robo Gameplay 1. HEALTH Breaks Down Their Score For Max Payne 3. In 2001, Rockstar Games changed the very nature of gaming with a release called Grand Theft Auto III. 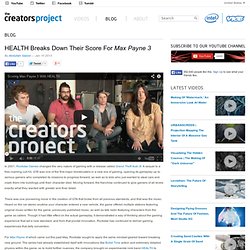 A sequel to a free-roaming cult hit, GTA was one of the first major blockbusters in a new era of gaming, opening its gameplay up to serious gamers who completed its missions to progress forward, as well as to kids who just wanted to steal cars and crash them into buildings until their character died. Moving forward, the franchise continued to give gamers of all levels exactly what they wanted with greater and finer detail. There was one pioneering move in the creation of GTA that broke from all previous standards, and that was the music. Heard on the car stereo anytime your character entered a new vehicle, the game offered multiple stations featuring original music written for the game, previously published music, as well as talk radio featuring characters from the game as callers.

Marvel experiments with audio in comics. A Composer’s Guide to Game Music – Vertical Layering, Part 1. PodQuest: The Musical Box #11: Musical Clues LA Noire. Despite the many controversies surrounding its development, it’s hard to deny that L.A. 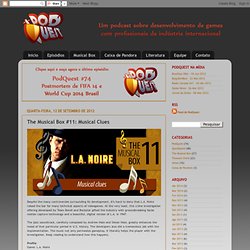 Noire raised the bar for many technical aspects of videogames. At the very least, this crime investigation offering developed by Team Bondi and Rockstar gifted the industry with groundbreaking facial motion capture technology and a beautiful, digital version of L.A. in 1947. The jazz soundtrack, carefully composed by Andrew Hale and Simon Hale, greatly enhances the mood of that particular period in U.S. history. The developers also did a tremendous job with the implementation. Deep dive with Harmonix's John Drake and Nick Chester: The full interview. I sat down with John Drake and Nick Chester of Harmonix recently to discuss the studio's upcoming game, Chroma—a musical shooter. 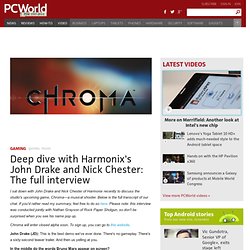 Below is the full transcript of our chat. If you'd rather read my summary, feel free to do so here. Please note: this interview was conducted jointly with Nathan Grayson of Rock Paper Shotgun, so don't be surprised when you see his name pop up. Chroma will enter closed alpha soon. To sign up, you can go to this website. John Drake (JD): This is the best demo we've ever done. The Musical Box - Spirit "Dynamic" Tracks - Train. FRACT, a Game Played Inside A Synthesizer World, Explains Itself [New Video, Mogi Grumbles]

FRACT, a 3D world-puzzle game based on synthesis, is after a long development beginning to become clear. 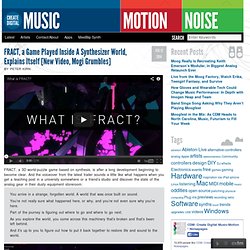 And the voiceover from the latest trailer sounds a little like what happens when you get a teaching post in a university somewhere or a friend’s studio and discover the state of the analog gear in their dusty equipment storeroom: You arrive in a strange, forgotten world. A world that was once built on sound.You’re not really sure what happened here, or why, and you’re not even sure why you’re here.Part of the journey is figuring out where to go and where to go next.As you explore the world, you come across this machinery that’s broken and that’s been left behind.And it’s up to you to figure out how to put it back together to restore life and sound to the world. Yep, been there. Zone out on an 8-bit island of sound with 'Proteus' 0inShare Jump To Close Walking through the world of Proteus is strange at first — and that’s largely because walking is all you can really do. 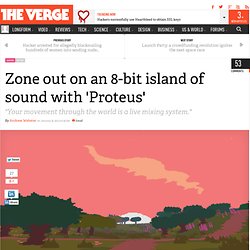 Oleksa Lozowchuk's Blog - Dead Rising 3: Zombies need lots of music. The following blog post, unless otherwise noted, was written by a member of Gamasutra’s community. The thoughts and opinions expressed are those of the writer and not Gamasutra or its parent company. Here’s a quick breakdown of what went into producing the soundtrack for Dead Rising 3, and some main takeaways from the experience. Music’s Role The music in Dead Rising 3 had some specific roles to play: help set the tone for the game; create tension through feedback, provide ear-candy and punctuate memorable moments for the user.

iMUSE Demonstration 2 - Seamless Transitions. Main/Songs in the Key of Panic. A timer reaches 100. Suddenly the music picks up. A frequent trope in video games. There are three main types: Hurry Music: Plays when the time to do something is running out, meaning the player has to hurry. Song in a Key of Warning: Music speeds up when a player is in a disadvantageous situation of some sort, such as low health. Nearing the End Music: Music speeds up when nearing the end of the task/level or some other progress in the game. Www.nime.org/proceedings/2006/nime2006_065.pdf.

The Suite Science: Paul Weir Talks Generative Music. By Duncan Harris on November 20th, 2013 at 9:00 pm. This is the latest in the series of articles about the art technology of games, in collaboration with the particularly handsome Dead End Thrills. When Paul Weir gave a talk at GDC 2011 about GRAMPS, the generative audio system he designed for Eidos Montreal’s Thief, the games press took notice. Not so much of the contents, though, or indeed the subject, just Thief.

Here, finally, was a chance to get something on this oh so secretive game. Maybe, while prattling on about ‘sounds’ and stuff, he’d toss them a headline or two, get ‘em some clicks. We can often seem deaf to game audio in the same way we’re blind to animation. Strange Horizons Articles: Beyond the Beep: Techniques and Styles of Video Game Music, by Mark Newheiser. 1 December 2008 It's hard to imagine video games without music. From the jazzy beeps and boops of the original Mario theme, to the little chirps and fanfares played to reward the player for power-ups or small victories, music has been integral to video gaming. When Rand and Robyn Miller were designing Myst, they initially conceived of it as having no music. Since the game took place on a series of islands with no people, the idea of having a soundtrack running seemed out of place. But after realizing how empty the world felt without it, they composed forty minutes' worth of music, and found it gave the experience much more texture.

(Nintendo, 1984) und The Legend of Zelda (Nintendo, 1986) gehört zu den Computerspielmusiken mit dem höchsten Wiedererkennungswert. Level With Me, Richard Flanagan. By Robert Yang on September 20th, 2013 at 5:00 pm. Level With Me is a series of interviews with game developers about their games, work process, and design philosophy. At the end of each interview, they design part of a small first person game. You can play this game at the very end of the series. Interactive music - University Observer. In the build up to Bjork’s Biophilia, Cormac Duffy takes a look at the phenomenon that is interactive music.

Keyboard Blogs - A Composers Perspective on Game Audio - Adaptive Audio Concepts and Work Flow. By Lance Hayes. The Fengxi Box: On Antichamber's Nature Music. I want to talk about Antichamber's nature soundscapes, which play in various forms and styles that correspond to certain places in its universe. Fighting Game Interactive Music Study. This article is a translation of my blog’s article originally published in French. The State of the MMO: Creating a Soundscape, Part 1. Game audio. You might only notice it when it’s really bad, and possibly, when it’s really good. And yet audio is as vital a part of most games as are visuals, drawing us into entire universes with the sounds of footsteps, the calls of birds, and the strains of orchestras.