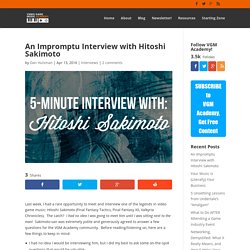 The catch? I had no idea I was going to meet him until I was sitting next to the man! Sakimoto-san was extremely polite and generously agreed to answer a few questions for the VGM Academy community. Before reading/listening on, here are a few things to keep in mind: I had no idea I would be interviewing him, but I did my best to ask some on-the-spot questions that would be valuable.All I had with me to record was my iPhone. Interview: Concerto Tactics - The Music of Hiroki Kikuta and Hitoshi Sakimoto. [We sit down with the composers behind Secret Of Mana and Muramasa, among many other titles, to discuss their art and new soundtrack albums, joining them as they reflect on one another's work.] 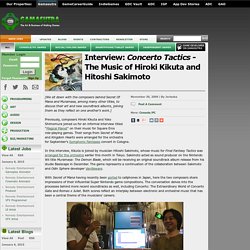 Previously, composers Hiroki Kikuta and Yoko Shimomura joined us for an informal interview titled "Magical Planet" on their music for Square Enix role-playing games. Their songs from Secret of Mana and Kingdom Hearts were arranged for the orchestra for September's Symphonic Fantasies concert in Cologne. In this interview, Kikuta is joined by musician Hitoshi Sakimoto, whose music for Final Fantasy Tactics was arranged for the orchestra earlier this month in Tokyo. Sakimoto acted as sound producer on the Nintendo Wii title Muramasa: The Demon Blade, which will be receiving an original soundtrack album release from his studio Basiscape in December. The game represents a continuation of the collaboration between Sakimoto and Odin Sphere developer Vanillaware. HK: I enjoyed the music. HS: In what way? These are the composers who gave gamers the soundtrack of their youth - Television.

If you are of a certain age and you had a sufficiently nerdy upbringing, particular sequences of bleeps and bloops are burned deeply into your brain. 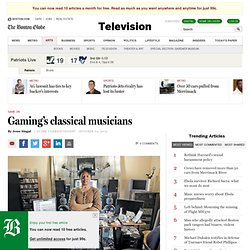 Whether it’s the sunny main theme of the original “Super Mario Bros.” or the epic it’s-adventure-time theme of “The Legend of Zelda,” these songs bring to mind the smell of basement rec rooms, the relaxed feel of lazy afternoons after school spent sprawled on the floor, eyes much too close to the screen (as our parents would constantly remind us). Most of us don’t know anything about these songs, though. Who wrote them? What was their inspiration?

That’s going to change for anyone who watches “Diggin’ in the Carts,” a very interesting online documentary miniseries from Red Bull Music Academy about the Japanese origins of classic 8- and 16-bit music. Continue reading below It’s a six-parter — the fifth installment was released on Thursday — with each episode running about 15 minutes. So who are these mysterious Japanese composers? Sound Byte: Meet the Composer - Hitoshi Sakimoto. Hitoshi Sakimoto has been in video game music composition a long time. 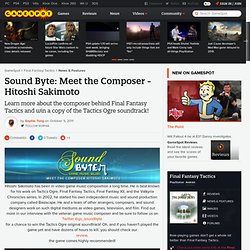 He is best known for his work on Tactics Ogre, Final Fantasy Tactics, Final Fantasy XII, and the Valkyria Chronicles series. In 2002, he started his own independent music and sound production company called Basiscape. He and a team of other arrangers, composers, and sound designers work on such digital mediums as video games, television, and film. Find out more in our interview with the veteran game music composer and be sure to follow us on Twitter @gs_soundbyte for a chance to win the Tactics Ogre original soundtrack! Oh, and if you haven't played the game yet and have dozens of hours to kill, you should check our review, the game comes highly recommended! 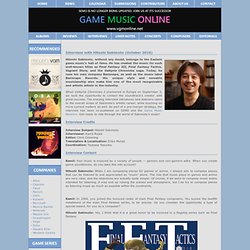 He has created the music for such well-known titles as Final Fantasy XII, Final Fantasy Tactics, Vagrant Story, and the Valkyria Chronicles saga. Today, he runs his own company Basiscape, as well as the music label Basiscape Records. His unique style and versatile musicianship also make him one of the most recognisable and artistic artists in the industry. When Valkyria Chronicles 2 premiered in Europe on September 3, we took the opportunity to contact the soundtrack's creator with great success. Hitoshi Sakimoto AU Interview. Hitoshi Sakimoto is on a roll right now. 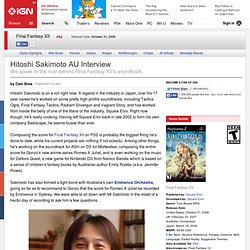 A legend in the industry in Japan, over his 17 year career he's worked on some pretty high profile soundtracks, including Tactics Ogre, Final Fantasy Tactics, Radiant Silvergun and Vagrant Story, and has worked from inside the belly of one of the titans of the industry, Square Enix. Right now though, he's really cooking. Having left Square Enix back in late 2002 to form his own company Basiscape, he seems busier than ever. Composing the score for Final Fantasy XII on PS2 is probably the biggest thing he's done to date, while his current projects are nothing if not eclectic. Among other things, he's working on the soundtrack for ASH on DS for Mistwalker, composing the entire score for Gonzo's new anime series Romeo X Juliet, and is even working on the music for Deltora Quest, a new game for Nintendo DS from Namco Bandai which is based on a series of children's fantasy books by Australian author Emily Rodda (a.k.a. 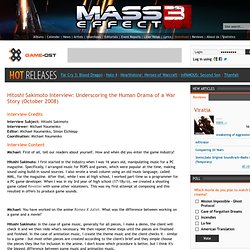