Interview: Uncharted and Firefly composer Greg Edmonson on the art of the soundtrack. Sean Wilson talks to the BAFTA-award-winning film, TV and video game composer about his celebrated soundtrack work… In today’s pop culture climate, no longer are composers limited to one genre or field of speciality. 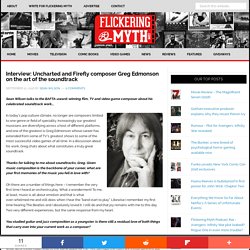 Increasingly our greatest musicians are diversifying across a host of different platforms, and one of the greatest is Greg Edmonson whose career has extended from some of TV’s greatest shows to some of the most successful video games of all time. In a discussion about his work, Greg chats about what constitutes a truly great soundtrack.

Thanks for talking to me about soundtracks, Greg. Given music composition is the backbone of your career, what are your first memories of the music you fell in love with? Uncharted 3 Interview: Music, Firefly And Uncharted Movie - Part 1. Uncharted 3 from Naughty Dog and Sony Computer Entertainment recently released exclusively for the PlayStation 3 to startling first-week sales. 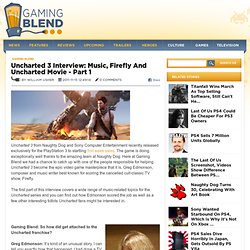 The game is doing exceptionally well thanks to the amazing team at Naughty Dog. Here at Gaming Blend we had a chance to catch up with one of the people responsible for helping Uncharted 3 become the epic video game masterpiece that it is, Greg Edmonson, composer and music writer best known for scoring the cancelled cult-classic TV show, Firefly. The first part of this interview covers a wide range of music-related topics for the Uncharted series and you can find out how Edmonson scored the job as well as a few other interesting tidbits Uncharted fans might be interested in. Gaming Blend: So how did get attached to the Uncharted franchise? Interview with Greg Edmonson (May 2010) One of the best soundtracks for the audiovisual media composed this year is for the video game "Uncharted 2: Among Thieves" by Greg Edmonson. 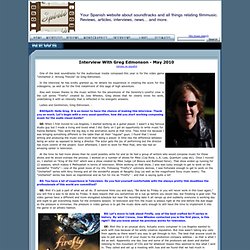 In the interview he has kindly granted us, he details his experience in creating the score for this videogame, as well as for the first installment of this saga of high adventure. Also well known thanks to the music written for the adventures of the Serenity’s colorful crew in the cult series “Firefly” created by Joss Whedon, Greg shows that he clearly loves his work, undertaking it with an intensity that is reflected in his energetic answers. Ladies and Gentlemen, Greg Edmonson. . : The SoundCast - Interview: Greg Edmonson (Uncharted 3) Composer Greg Edmonson Interview at Tracksounds. Greg Edmonson is most recently known for his sensational work on the 2002 FOX television hit, Firefly. 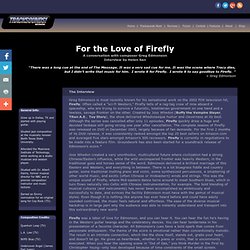 Often called a "sci-fi Western," Firefly tells of a rag-tag crew of nine aboard a spaceship, who are trying to survive a futuristic, totalitarian government on one hand and a lawless, savage frontier on the other. Created by Joss Whedon (Buffy the Vampire Slayer, Titan A.E., Toy Story), the show delivered Whedonesque humor and cleverness at its best. Although the series was cancelled after only 11 episodes, Firefly quickly drew a huge and devoted fanbase still going strong one year after cancellation.

The complete season of Firefly was released on DVD in December 2003, largely because of fan demands. Greg Edmonson Firefly and Uncharted Article. Greg Edmonson loves what he does, maybe a little too much. 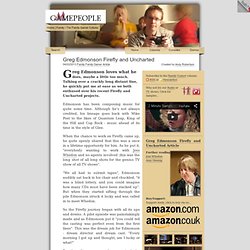 Talking over a crackly long distant line, he quickly put me at ease as we both enthused over his recent Firefly and Uncharted projects. Edmonson has been composing music for quite some time. Although he's not always credited, his lineage goes back with Mike Post to the likes of Quantum Leap, King of the Hill and Cop Rock - music ahead of its time in the style of Glee. When the chance to work on Firefly came up, he quite openly shared that this was a once in a lifetime opportunity for him. As he put it, "everybody wanting to work with Joss Whedon and no agents involved ,this was the long shot of all long shots for the genius TV show of all TV shows". Greg Edmonson and Uncharted 3 on Top Score. November 17, 2011 Copy and paste the HTML below to embed this audio onto your web page. 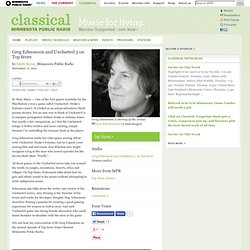 Audio player code: Big Damn Interview with Greg Edmondson [Part 1] Uncharted 2's Music Maestro - An Interview with Greg Edmonson. Greg Edmonson Interview – we talk Uncharted with the series’ composer. Tell us a little about yourself, and how you got into videogames. It’s difficult to encapsulate. I moved to Los Angeles and worked as a guitar player, and early on I got an opportunity to work for the animation company Hannah Barbara. I found that I really loved working to picture like that, so I continued to work in television and it just kind of blossomed from there.

I ended up working on King Of The Hill, which was good because I’m from Texas myself. That ran for twelve years, and while I was working on that I ended up getting a job on Firefly – I can’t tell you how much I loved working on that. After Firefly died I got a call from Naughty Dog, and they said they really liked the Firefly stuff and they wanted my help on a trailer they were doing for E3. The Uncharted series is the only videogame series you’ve worked on, right?

Did you have any desire to work in videogames before Naughty Dog approached you? But, saying that, in other ways having no finished picture is kind of good. Interview with Greg Edmonson (November 2011) Exclusive: Interview With UNCHARTED’s Greg Edmonson. Chris is a contributor and Founder of All Things UNCHARTED This interview took place in March 2010, however due to many misfortunate events, it stayed as a draft until now. 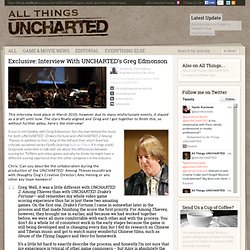 The stars finally aligned and Greg and I got together to finish this, so without further adieu, here’s the interview! If you’re not familiar with Greg Edmonson, he’s the man behind the music for both UNCHARTED: Drake’s Fortune and UNCHARTED 2 Among Thieves, in addition to Fox’s King of the Hill and their short-lived but critically-acclaimed series Firefly (starring Nathan Fillion if it rings a bell). Greg took some time to talk with me about the differences between scoring for TV/films and video games and why he thinks he might have a different scoring experience than the other composers in the industry. Composer Interview: Greg Edmonson - Film.Music.Media. Uncharted interview: Greg Edmonson. FMM: Composer Interview- Greg Edmonson. An Evening with the UNCHARTED 2 Music Team. By arne | Twitter @arnemeyer | Wednesday July 14 2010 Back in December 2009, Pyramind Studios hosted an exclusive behind-the-scenes event on the making of the music for UNCHARTED 2. 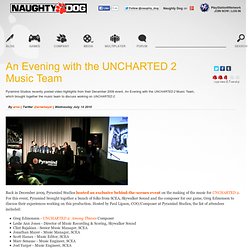 For this event, Pyramind brought together a bunch of folks from SCEA, Skywalker Sound and the composer for our game, Greg Edmonson to discuss their experiences working on this production. Hosted by Paul Lipson, COO/Composer at Pyramind Studios, the list of attendees included: Greg Edmonson - UNCHARTED 2: Among Thieves ComposerLeslie Ann Jones - Director of Music Recording & Scoring, Skywalker SoundClint Bajakian - Senior Music Manager, SCEAJonathan Mayer - Music Manager, SCEAScott Hanau - Music Editor, SCEAMarc Senasac - Music Engineer, SCEAJoel Yarger - Music Engineer, SCEA Just a few days ago, they posted a video of highlights from An Evening with the UNCHARTED 2 Music Team – we’ve embedded the video below or you can head straight to the Pyramind YouTube channel. Sound Byte: Meet the Composer - Greg Edmonson. The Uncharted series is renowned not only for its action-packed gameplay, but also for its grand soundtrack. 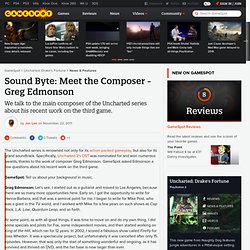 Specifically, Uncharted 2's OST was nominated for and won numerous awards, thanks to the work of composer Greg Edmonson. GameSpot asked Edmonson a few questions about his recent work on the third game. GameSpot: Tell us about your background in music. Greg Edmonson: Let's see. I started out as a guitarist and moved to Los Angeles, because there are so many more opportunities here. Www.tracksounds.com/audio/soundcast/soundcast_032010.mp3.