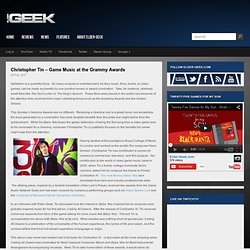 So many ventures in entertainment, be they music, films, books, or video games, can be made successful by one positive review or award nomination. Take, for instance, relatively small films like The Hurt Locker or The King’s Speech. These films were placed in the public eye because of the attention they received from major validating forces such as the Academy Awards and the Golden Globes. This Sunday’s Grammy Awards are no different. Having studied at the prestigious Royal College of Music in London and worked under prolific film composer Hans Zimmer, Christopher Tin has contributed to scores for numerous commercial, television, and film projects. 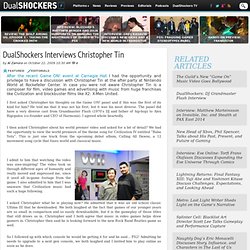 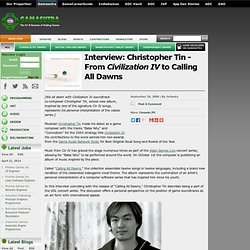 Musician Christopher Tin made his debut as a game composer with the tracks "Baba Yetu" and "Coronation" for the 2004 strategy title Civilization IV. His contributions to the score earned him two awards from the Game Audio Network Guild, for Best Original Vocal Song and Rookie of the Year. Music from Civ IV has graced the stage numerous times as part of the Video Games Live concert series, allowing for "Baba Yetu" to be performed around the world.

On October 1st the composer is publishing an album of music inspired by the piece. Called "Calling All Dawns," the collection assembles twelve songs in twelve languages, including a brand new rendition of the celebrated videogame vocal theme. Sadly, on a macro level, there is no interplay between classical music and videogames. Absolutely! Interview with Christopher Tin (February 2012) 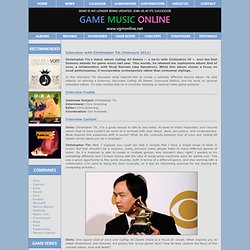 This month, he released his sophomore album God of Love, a collaboration with Shoji Kameda (aka Kametron). While this album shares a focus on vocal performances, it incorporates contemporary rather than orchestral stylings. In this interview, Tin discusses what inspired him to create a radically different second album. He also reflects on winning a Grammy, discusses Calling All Dawns: Surround Edition, and his work on several animated videos. 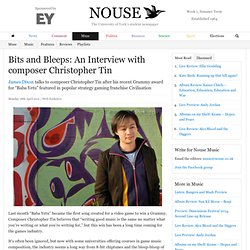 Composer Christopher Tin believes that “writing good music is the same no matter what you’re writing or what you’re writing for,” but this win has been a long time coming for the games industry. It’s often been ignored, but now with some universities offering courses in game music composition, the industry seems a long way from 8-bit chiptunes and the bleep-bloop of Pong. “Writing music for video games wasn’t even a blip on the radar when I was in school – the focus was on writing music for film.

No one even acknowledged it.” “The sound that the composers bring to their game is as important an element of the brand identity as the look of the characters, and the music has the possibility of travelling to areas that the games themselves wouldn’t reach. Christopher Tin Grammy Interview — We All Make Music. Christopher Tin is a quick study. 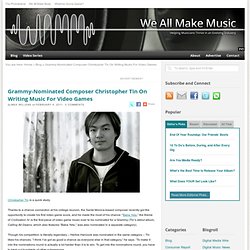 Thanks to a chance connection at his college reunion, the Santa Monica-based composer recently got the opportunity to create his first video game score, and he made the most of his chance: “Baba Yetu,” the theme of Civilization IV, is the first piece of video game music ever to be nominated for a Grammy (Tin’s debut album, Calling All Dawns, which also features “Baba Yetu,” was also nominated in a separate category). Though his competition is literally legendary – Herbie Hancock was nominated in the same category – Tin likes his chances.

“I think I’ve got as good a chance as everyone else in that category,” he says. “To make it into the nominations round is actually a lot harder than it is to win. To get into the nominations round, you have to beat out hundreds of other submissions. “Once you’re in, it’s a 20% chance. “I think the biggest difference is technical demands,” Tin begins. “It takes out a whole dimension of composition, that is structure. Composer Christopher Tin on His Big Video Game Breakthrough. Christopher Tin. Christopher Tin (Chinese: 田志仁) is an American composer whose work is primarily classical with a world music influence. 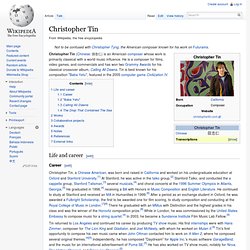 He is a composer for films, video games, and commercials and has won two Grammy Awards for his classical crossover album, Calling All Dawns. Tin is best known for his composition "Baba Yetu", featured in the 2005 computer game Civilization IV. Life and career[edit] Career[edit] "Baba Yetu"[edit] Tin's biggest break came in 2005, when video game designer Soren Johnson, his former roommate at Stanford, asked him to compose the theme song for Civilization IV.[10] Tin responded with "Baba Yetu", a choral, Swahili version of the Lord's Prayer performed by Stanford Talisman.[11] It has garnered a huge critical response, with over 20 reviewers singling out the theme on IGN, GameSpy, and Game Shark,[12] and is a persistent favorite of blog posts.

Calling All Dawns[edit] Composer Interview: Christopher Tin - OCRWiki. Armed with arguably the richest scholarly background among game composers, Christopher Tin has quickly built a name for himself in the world of professional music, having worked across advertising, film, television and games. 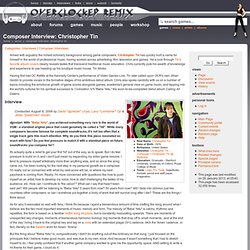 Yet a look through Tin's favorite album covers clearly reveals tastes that transcend traditional music education. Chris currently puts his wealth of knowledge and experience to use heading up his boutique music house, Tin Works. Having first met OC ReMix at the Kennedy Center's performance of Video Games Live, Tin later called upon OCR's own Jillian Goldin to provide vocals in the formative stages of his ambitious debut album. Chris also spoke candidly with us on a number of topics including the emotional growth of game scores alongside games, academia's general view on game music, and tapping into the world's cultures for his spiritual successor to Civilization IV's "Baba Yetu," the soon-to-be-completed debut album Calling All Dawns. 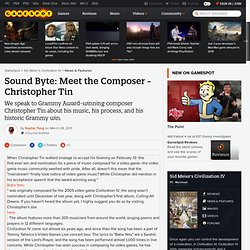 After all, doesn't this mean that the "mainstream" finally took notice of video game music? While Christopher did mention in his acceptance speech that the award-winning song "Baba Yetu" was originally composed for the 2005 video game Civilization IV, the song wasn't nominated until December of last year, along with Christopher's first album, Calling All Dawns. If you haven't heard the album yet, I highly suggest you do so by visiting Christopher's site here. The album features more than 200 musicians from around the world, singing poems and prayers in 12 different languages. Civilization IV came out almost six years ago, and since then the song has been a part of Tommy Tallarico's Video Games Live concert tour. Filed under:

Christopher Tin on Top Score. September 25, 2012 Copy and paste the HTML below to embed this audio onto your web page. 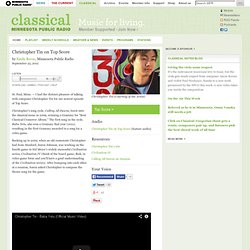