Bear McCreary On Composing The Live God Of War Demo. Opening its E3 2016 press conference with a demo of a new God Of War game scored by an actual orchestra lacked no amount of spectacle on Sony's behalf. 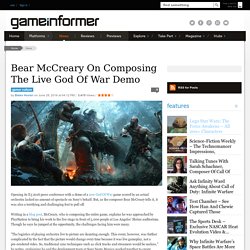 But, as the composer Bear McCreary tells it, it was also a terrifying and challenging feat to pull off. Writing in a blog post, McCreary, who is composing the entire game, explains he was approached by PlayStation to bring his work to the live stage in front of 5,000 people at Los Angeles' Shrine auditorium. Though he says he jumped at the opportunity, the challenges facing him were many. "The logistics of playing orchestra live to picture are daunting enough.

This event, however, was further complicated by the fact that the picture would change every time because it was live gameplay, not a pre-rendered video. "Clearly this show would not start with speeches or visuals, but would begin with music," McCreary continues. God Of War will be coming exclusively to the PlayStation 4, though a release date hasn't yet been given. 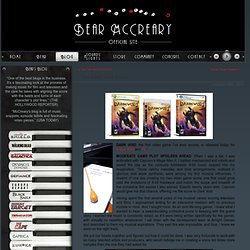 MODERATE GAME PLOT SPOILERS AHEAD: When I was a kid, I was enthralled with Capcom’s Mega Man II. I battled mechanized evil robots and saved the day as the curiously bombastic 8-bit music seeped into my imagination. Those catchy melodies and bold arrangements, realized in glorious sine wave synthesis, were among my first musical influences. I dreamt of one day creating my own video game score, one that could grow past the limitations of 8-bit hardware and match the scope and breadth of the orchestral film scores I also adored. Exactly twenty years later, Capcom would give me that chance, offering me the score to Dark Void.

Having spent the first several years of my musical career scoring television and films, I approached writing for an interactive medium with no previous models in mind. We put our heads together and figured out how it could be done. (Click image above for full-res panoramic. Bear McCreary, Composer. Agents of S.H.I.E.L.D. - A Day In The Life. Bear McCreary interview. Find Bear @ Official website Bear @ Twitter Bear @ Facebook Tell us a little about yourself and what you do for a living? 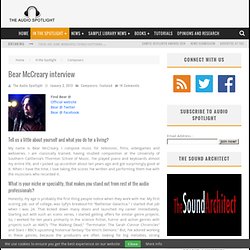 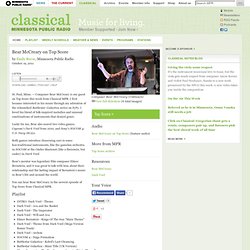 Audio player code: St. Paul, Minn. — Composer Bear McCreary is our guest on Top Score this week from Classical MPR. I first became interested in his music through my adoration of the relaunched Battlestar Galactica series on SyFy. Lucky for me, Bear also scored two video games. Both games introduce discerning ears to some less-traditional instruments, like the gamelan orchestra in SOCOM or the Ondes Martenot (like a theremin, but cooler) in Dark Void. Interview with Bear McCreary (April 2011) Composer Bear McCreary has attained legendary status among fans of Battlestar Galactica. 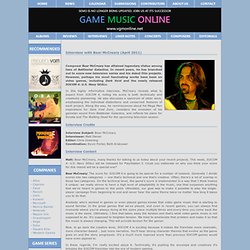 In recent years, he has branched out to score new television series and his debut film projects. However, perhaps his most fascinating works have been on video games, including Dark Void and the newly released SOCOM 4: U.S. Navy SEALs. Bear McCreary – Official site. The super-secret video game project I have been hinting at is super-secret no more. 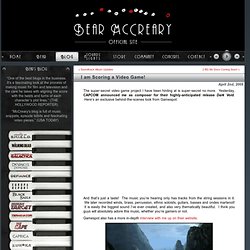 Yesterday, CAPCOM announced me as composer for their highly-anticipated release Dark Void. Here’s an exclusive behind-the-scenes look from Gamespot: And that’s just a taste! The music you’re hearing only has tracks from the string sessions in it. 'Dark Void' Musical Composer Bear McCreary Interview: The Accordion Spirit. Sound Byte: Meet the Composer - Bear McCreary. Bear McCreary: I grew up in the Pacific Northwest playing 8-bit video games and going to see big summer movies. 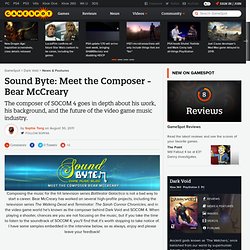 And the whole time, I was listening to the music in both of these mediums, and music was always my passion, and I wanted to combine all these things. I started studying film music very seriously when I was in middle school, and by high school I was writing music all day every day. I was taking piano lessons and playing in rock bands, but basically my focus was classical film music and orchestral music and learning how that kind of music worked.

I moved to LA to go to school and got my training at the University of Southern California, but prior to that, I actually met film composer Elmer Bernstein, who is one of the legends of the business, and he kind of took me under his wing, and I was his final protege for several years, so even during my time at USC, I was studying with and working for him and really learning the tools of the trade in the film music business for him. Exclusive interview with Bear McCreary. December 18, 2010 By daviddoel Articles, Home There are many aspects of game development that are responsible for creating the digital experiences most of us enjoy on a daily basis. 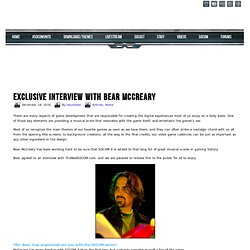 One of those key elements are providing a musical score that resonates with the game itself, and entertains the gamer’s ear. Most of us recognize the main themes of our favorite games as soon as we hear them, and they can often strike a nostalgic chord with us all. Bear agreed to an interview with TheRealSOCOM.com, and we are pleased to release this to the public for all to enjoy. TRS: Bear, how acquainted are you with the SOCOM series? TRS: Are you a gamer in your spare time? I Am Bear McCreary (@bearmccreary), composer for "Battlestar Galactica: Blood & Chrome," "The Walking Dead" and other cool stuff. AMA! : IAmA.