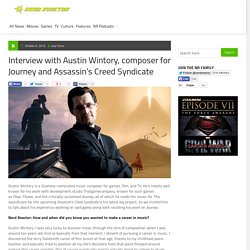 He’s mostly well known for his work with development studio Thatgamecompany, known for such games as Flow, Flower, and the critically-acclaimed Journey, all of which he made the music for. The soundtrack for the upcoming Assassin’s Creed Syndicate is his latest big project, so we invited him to talk about his experience working on said game along with recalling his work on Journey. Nerd Reactor: How and when did you know you wanted to make a career in music? Austin Wintory: I was very lucky to discover music through the lens of composition when I was around ten years old. And so basically from that moment, I dreamt of pursuing a career in music. 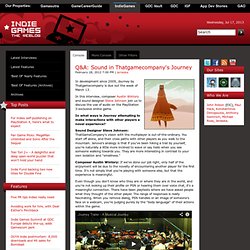 In this interview, composer Austin Wintory and sound designer Steve Johnson join us to discuss the use of audio on the PlayStation 3-exclusive online game. In what ways is Journey attempting to make interactions with other players a novel experience? Sound Designer Steve Johnson: ThatGameCompany's vision with the multiplayer is out-of-the-ordinary. You start off alone, and then cross paths with other players as you walk to the mountain. GDC 2012 - Interview with Austin Wintory. Austin Wintory : Composer : Official Website. Journey/The Banner Saga's Austin Wintory - "Music's Rising Tides" - D.I.C.E. 2014 Summit. Austin Wintory’s New Video Game Music, for the Banner Saga. Photo The composer Austin Wintory’s office in Burbank, Calif., contains a desk, a chair and a life-size model of R2-D2. 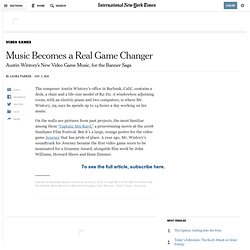 A windowless adjoining room, with an electric piano and two computers, is where Mr. Wintory, 29, says he spends up to 14 hours a day working on his music. On the walls are pictures from past projects, the most familiar among them “Captain Abu Raed,” a prizewinning movie at the 2008 Sundance Film Festival. But it’s a large, orange poster for the video game Journey that has pride of place. “For a brief second, I stood shoulder to shoulder with three of my childhood heroes,” Mr. It was not only a personal achievement. But while contemporary scores broadly set the mood and tone of games, the challenge for composers now is to narrow their focus to individual moments.

Soundodger+ - Lost Age - Austin Wintory. THE BANNER SAGA - Coming soon! Orchestral View - Journey Nascence. Www.doublefine.com/ActionCast/DoubleFineActionCast013_Composers.mp3. Austin Wintory and Monaco: What's Yours is Mine. May 31, 2013 Copy and paste the HTML below to embed this audio onto your web page. 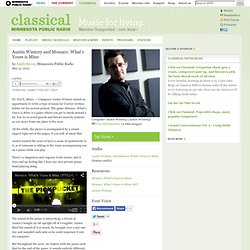 Audio player code: ST. PAUL, Minn. — Composer Austin Wintory seized an opportunity to write a type of music he'd never written before for his newest project. The game Monaco: What's Yours is Mine is a game where you get to sneak around a lot. All the while, the player is accompanied by a sound ripped right out of the pages, if you will, of silent film. Austin wanted the score to have a sense of spontaneity to it, as if someone is sitting in the room accompanying you on a piano while you play. There's a sloppiness and urgency to his music, and it does end up feeling like I have my own private piano band playing along. The sound of the piano is interesting; a friend of Austin's bought an old upright off of Craigslist. But throughout the score, he tinkers with the piano such that by the end of the game, it sounds entirely different. Interview with Journey Composer Austin Wintory at VGA's 2012 - GamersBlis.com. Blog - 8dio. Artist Spotlight: Austin Wintory / Questions by Jan Hoeglund & Troels Folmann. 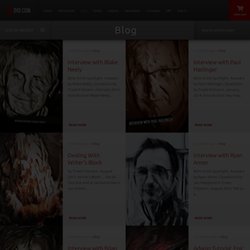 April 2013 Introduction. JOURNEY - Complete score with text commentary. Sound Byte: Meet the Composer - Austin Wintory. The last time we talked about Journey, we had a chat with director Jenova Chen to get his thoughts on how the game was received. 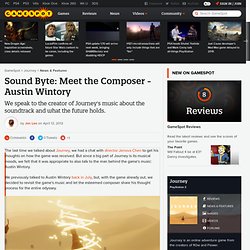 But since a big part of Journey is its musical moods, we felt that it was appropriate to also talk to the man behind the game's music: Austin Wintory. We previously talked to Austin Wintory back in July, but, with the game already out, we decided to revisit the game's music and let the esteemed composer share his thought process for the entire odyssey. GameSpot: Tell us about how you got started in the music-making business.

Austin Wintory: I got started at age 10, when my piano teacher exposed me to the film scores of Jerry Goldsmith (particularly for the films Patton, A Patch of Blue, and Papillon). I couldn't believe people made music like this, so it became instantly my goal to be a composer. My entire life since then has been angled at making that a reality. GS: What drew you to Flow and Journey in the first place? Interview: We Chat with Grammy Award Nominee Austin Wintory - Article - gamrReview. We recently had a chance to chat with composer Austin Wintory – the man behind the Journey OST - about his recent Grammy nomination, composing music for video games and movies, and everything in between. 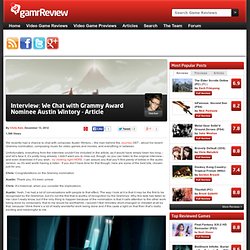 Unfortunately, everything from the interview couldn't be included in the article, as it would have simply been too long – and let’s face it, it’s pretty long already. I didn't want you to miss out, though, so you can listen to the original interview - and even download it if you wish - by clicking right HERE. I can assure you that you’ll find plenty of extras in the audio version, so it's well worth having a listen. If you don't have time for that though, here are some of the best bits, chosen just for you. Chris: Congratulations on the Grammy nomination. Interview: Journey.

Austin Wintory talks about Journey on Top Score. May 23, 2012 Copy and paste the HTML below to embed this audio onto your web page. 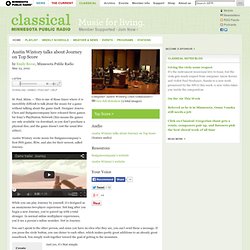 Audio player code: St. Paul, Minn. — This is one of those times where it is incredibly difficult to talk about the music for a game without talking about the game itself. Designer Jenova Chen and thatgamecompany have released three games for Sony's PlayStation Network (this means the games are only available via download, so you don't purchase a physical disc, and the game doesn't cost the usual $60 either). GDC 2012 - Interview with Austin Wintory. Interview: 'Journey' composer Austin Wintory.

When videogames first emerged from the primordial entertainment soup, their music was constrained by limited technology and consisted of little more than (sometimes insidiously catchy) 8-bit bleeps and blips. 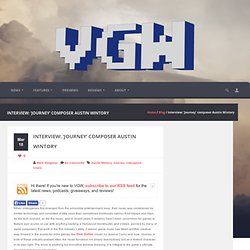 As the tech evolved, so did the music, and in recent years it certainly hasn’t been uncommon for games to feature epic scores on par with anything backing a Hollywood blockbuster, and indeed, penned by many of same composers that work in the film industry. Lately, it seems, game music has taken another creative leap forward in the scores for indie games like Dear Esther (music by Jessica Curry) and now, Journey.

In both of these critically-praised titles, the music functions not simply descriptively, but as a distinct character in its own right. The score is anything but evocative window dressing; it is integral to the game’s ultimate meaning and player experience. It was definitely a conscious choice and one I made pretty early on. But I’m going off-subject. Oh absolutely. Interview with Austin Wintory (December 2012) 2012 has been a bumper year for Austin Wintory. 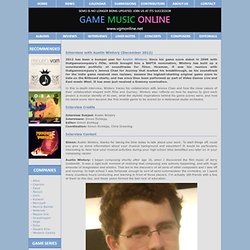 Since his game score debut in 2006 with thatgamecompany's flOw, which brought him a BAFTA nomination, Wintory has built up a considerable portfolio of soundtracks for films. However, it was his reunion with thatgamecompany's Jenova Chan for Journey that marked his breakthrough, as his soundtrack for the indie game received rave reviews, became the highest-charting original game score to date on the Billboard charts, and has since then been performed as part of Video Games Live and East meets West. Austin Wintory - Play Fest Interview. He\'s One of Us - Interview with Austin Wintory - Interview. SoundtrackNet recently had the opportunity to interview composer Austin Wintory about his recent works and his new score for Jordan's Academy Award submission, Captain Abu Raed.

I've known and corresponded with Austin over the years since my days in college and the days of USENET groups, well before the plethora of websites now dedicated towards the art. He's "one of us", a fan and admirer of the art of film scoring, who made the enviable leap to full-fledged award-winning film (and game) music composer. How did you come to go from being a film music fan to a full-fledged composer? My obsession with film music started at about age 10 when my childhood piano teacher introduced me to some of Jerry Goldsmith's early scores, namely Patton and A Patch of Blue. Die hard fanatic since then. Do you think your initial interest in Goldsmith affected your musical style when scoring professionally?