<a href=" excels at developing custom Rails-based solutions within projects that enjoy minimized timelines and reduced costs. We deliver unbeatable startup- and enterprise-grade results faster, all thanks to Rails’ out-of-the-box versatility.

Chart in Rails – RailsCarma Blog. We have been working on a project that deals with server data where charts are worth a thousand words. 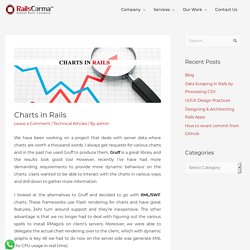 I always get requests for various charts and in the past I’ve used Gruff to produce them. Gruff is a great library and the results look good too! However, recently I’ve have had more demanding requirements to provide more dynamic behaviour on the charts. Users wanted to be able to interact with the charts in various ways and drill down to gather more information. I looked at the alternatives to Gruff and decided to go with XML/SWF charts. In this article, I would like to throw some light on various charts that are available for rails like Gruff, Google charts, Ziya charts, Open Flash charts and Fusion charts. I am currently using Open Flash charts for the current project.

Gruff charts: Gruff is a Ruby library for generating attractive and powerful graphs, useful for web applications, print media and many others. Snapshot Rendering. HAML: HTML Abstraction Markup Language - Railscarma Blog. Recently, I got to learn about HAML for supporting my Rails Application and I found out some very interesting facts which I wanted to share with you guys. 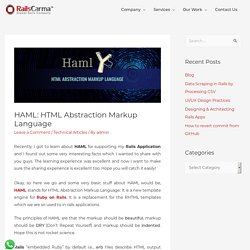 The learning experience was excellent and now I want to make sure the sharing experience is excellent too. Hope you will catch it easily! Okay, so here we go and some very basic stuff about HAML would be, HAML stands for HTML Abstraction Markup Language. Selenium Testing Tool – RailsCarma Blog. Testing is one of the important aspects of the final product. 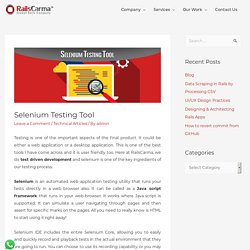 It could be either a web application or a desktop application. This is one of the best tools I have come across and it is user friendly too. Here at RailsCarma, we do test driven development and selenium is one of the key ingredients of our testing process.Selenium is an automated web application testing utility that runs your tests directly in a web browser also. It can be called as a Java script framework that runs in your web-browser. Behavior Driven Development(BDD)/Cucumber. Behavior Driven Development describes a cycle of interactions with well defined outputs, resulting in the delivery of working, tested software that matters. 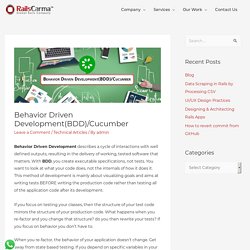 With BDD, you create executable specifications, not tests. You want to look at what your code does, not the internals of how it does it. This method of development is mainly about visualizing goals and aims at writing tests BEFORE writing the production code rather than testing all of the application code after its development. If you focus on testing your classes, then the structure of your test code mirrors the structure of your production code. What happens when you re-factor and you change that structure? When you re-factor, the behavior of your application doesn’t change. Welcome Rails 3.0 – RailsCarma Blog. As of December 23, 2008, the Merb (Mongrel + Erb) project is being merged with Rails, and a version with the best features of both will be released in 2010 under the name Rails 3. 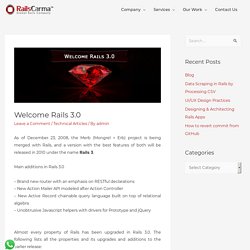 Main additions in Rails 3.0 – Brand new router with an emphasis on RESTful declarations – New Action Mailer API modeled after Action Controller – New Active Record chainable query language built on top of relational algebra – Unobtrusive Javascript helpers with drivers for Prototype and jQuery Almost every property of Rails has been upgraded in Rails 3.0. The following lists all the properties and its upgrades and additions to the earlier release: The basic changes include the following : – Rails 3.0 supports only Ruby 1.8.7 and higher – Application Object To run multiple Rails applications in the same process, a new concept called Application object has been introduced. . – Script/* The new script/rails replaces all the scripts that used to be in the script directory. Red_items.exists? Deploying Rails Application using Capistrano and Phusion Passenger. Deploying a rails application onto the servers is a complicated task when performed manually, since it needs us to login to the servers, upload the code from the local system every time and maintain the backup of the updates if we want to revert. 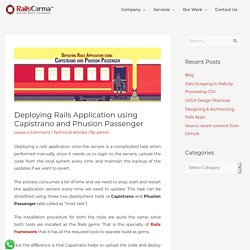 The process consumes a lot of time and we need to stop, start and restart the application servers every time we need to update. This task can be simplified using these two deployment tools i.e Capistrano and Phusion Passenger (also called as “mod_rails”). The installation procedure for both the tools are quite the same, since both tools are installed as the Rails gems. That is the specialty of Rails framework that it has all the required tools to operate build as gems. But the difference is that Capistrano helps to upload the code and deploy whereas Phusion Passenger is an Apache module which helps us to deploy a rails application on Apache a breeze. The installation of the Tools are as shown below : Capistrano Deployment With Subversion - RailsCarma Blog.

Capistrano Deployment Capistrano is a tool used for automation of the application deployment process. 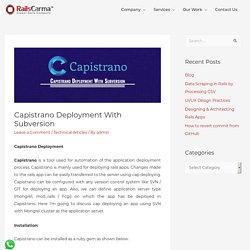 Capistrano is mainly used for deploying rails apps. Changes made to the rails app can be easily transferred to the server using cap deploying. Capistrano can be configured with any version control system like SVN / GIT for deploying an app. Also, we can define application server type (mongrel, mod_rails / Fcgi) on which the app has be deployed in Capistrano. Ruby enterprise edition + Passenger installation. Contributor : Vinayan Ruby enterprise edition can be installed on the server using the following steps : $ wget $ tar -zxvf ruby-enterprise-1.8.7-2010.01.tar.gzPS: Make sure that the patch is installed on the server. 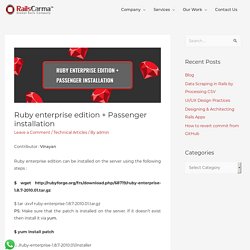 If it doesn’t exist then install it via yum. $ yum install patch $ . /ruby-enterprise-1.8.7-2010.01/installer Once the ruby enterprise edition is installed , the following message will appear :“Ruby Enterprise Edition is successfully installed!” PassengerRoot /opt/ruby-enterprise-1.8.7-2010.01/lib/ruby/gems/1.8/gems/passenger-2.2.11. Servermascot E Store for Server Management wows its customers. Within just three weeks of the successful launch of a revolutionary product by InstaCarma, ServerMascot has become an instant hit. 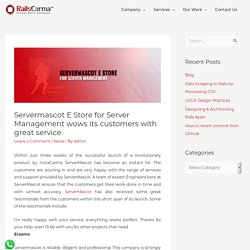 The customers are pouring in and are very happy with the range of services and support provided by ServerMascot. A team of expert Engineers here at ServerMascot ensure that the customers get their work done in time and with utmost accuracy. ServerMascot has also received some great testimonials from the customers within this short span of its launch. Some of the testimonials include, I’m really happy with your service, everything works perfect. Servermascot is reliable, diligent and professional. Thanks Servermascot, your fast delivery and efficient service is highly appreciated. How to Install Ruby on rails in your system. Configure Sphinx in Rails application - RailsCarma Blog. 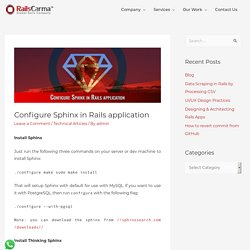 /configure make sudo make install That will setup Sphinx with default for use with MySQL. If you want to use it with PostgreSQL, then run configure with the following flag: . Note: you can download the sphinx from //sphinxsearch.com/downloads// Install Thinking Sphinx Even though there are a couple of Sphinx in Rails application, I chose to go with Thinking Sphinx, as it seems to be the most popular and feature complete.

Script/plugin install. Install Image-magick and magick for rails - RailsCarma Blog. Start by removing any old versions previously installed via apt-get: sudo apt-get remove imagemagick Then update apt-get and install some supporting packages: File Uploading Using Paper Clip Rails Plugin. This is one of the most useful plug (Rails Plugin) in that can be used in your application when you require to upload a file as attachment to your application, its quite easy to use and with the help of paperclip scaffolding you can achieve file upload feature very easily, below i have explained the steps to create a simple application using scaffolding that enables the file upload feature with the help of paperclip plugin.

Steps: Install the required gems to run the paperclip plugin from the below mentioned command, $ gem sources -a added to sources $ sudo gem install view_mapper Successfully installed view_mapper-0.2.0 1 gem installed Installing ri documentation for view_mapper-0.2.0... Installing RDoc documentation for view_mapper-0.2.0... Group Chat Room in Rails - RailsCarma Blog. Introduction: Chat Engine is a lightweight rails engine that heavily uses jQuery and memcached to implement a very simple group chat room. Features: You must enter a nickname to be part of the chat room.All logged in users are shown in the user listLines in the chat that mention a users nickname are highlighted.Inactivity timer will logout users from the client side.rake task to logout users whose browsers do not allow ajax requests in the unload event.The ability to mute specific users (from script/console).

Muted users will see their own messages, but no one else will. Implementation: How to Set up Redmine-project tracking system. Set up Redmine-project tracking system Installation Steps 1) Make sure ruby 1.8.7 and Rubygem are installed. Problems Faced in Setting up Rails 3 with Ruby 1.9.2. I migrated all my applications to Rails 3 with ruby 1.9.2, after I installed ruby I faced few errors. Few of them are 1) The arrow keys were not working in irb console and “no such file to load –readline” error. This is the problem which occurs when the readline extension is not installed with ruby source. All you have to do to fix this error is Go to your ruby source folder you downloaded and installed ruby from. 1. cd ~/ruby-1.9.2 2. cd ext/readline And execute the commands below. 3. ruby extconf.rb 4. make 5. sudo make install.

Excited for Ruby on Rails 3.1 - Railscarma Blog. Ours is a very dynamic world, especially for developers or Ruby on Rails Developers to be specific. Things which you like working on and best comfortable with can change in a sudden splash of thunder!!! We are one of the best examples of human’s adaptability. On a serious note few highlights of newly released Rails 3.1 are. Set Up Rails Development Environment - RailsCarma Blog. A Couple of months back I had a situation, which concerned about installing Ruby on Rails and rails on my system. After reading through many blogs and posts related with installation, at last I found RVM (Ruby Version Manager) as the best option among all which is a neater way of installing Ruby on Rails. Database Error. Things To Remember While Hiring Ruby on Rails Company. Ruby on Rails also known as RoR is an open source Web Application Framework. RoR has a strong Model View Controller (MVC) architecture.

Linkedin api in Rails applications - RailsCarrma Blog. LinkedIn provides 2 APIs: How to install SVN - RailsCarma Blog. What is Apache Subversion or SVN? Subversion is an Apache-licensed, open source software versioning and version control system that can track changes to files, folders and directories. It can also be used to recover previous versions of data, and examine the history of how a particular dataset has changed. Integrate Google Analytics in Rails 3 Application. Google Analytics is a great tool to present statistics on your websites performance. Installing Google Analytics into a Ruby on Rails app is pretty straight forward, however, the key is to only execute the analytics script in Production environment. Without doing this, you will end up counting page views and visits on all your environments, e.g. development and test.

Install and Setup RVM - RailsCarma Blog. Ruby Version Manager allows you to install and manage several different versions and implementations of Ruby on one computer, including the ability to manage different sets of RubyGems. It is a command line tool which allows us to easily install, manage and work with multiple Ruby environments from interpreters to sets of gems. Install rails 3.2.3 - RailsCarma Blog. This release changes the default value of config.active_record.whitelist_attributes to true.

This change only affects newly generated applications so it should not cause any backwards compatibility issues for users who are upgrading but it may affect some tutorials and introductory material. Integrating Paypal into Rails Application - Railscarma Blog. Paypal is an e-commerce based web application, which transfers the amount between two accounts. Almost all US-based companies use paypal for there receiving and doing the payments.Lets see how to integrate this service in rails application in different steps. Note: I have tried these steps in development mode, on my local machine.