Mozilla WebMaker. Blog Details. Blogger. Android. Wpf. HTML 5. Tournament Lab. NASA and Harvard University have established the NASA Tournament Lab (NTL), which with the enabling capabilities of the TopCoder community allow for competitions to create the most innovative, most efficient, and most optimized solutions for specific, real-world challenges being faced by NASA researchers. 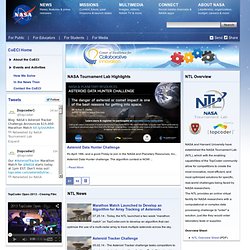 The NTL provides an online virtual facility for NASA researchers with a computational or complex data processing challenge to "order" a solution, just like they would order laboratory tests or supplies. 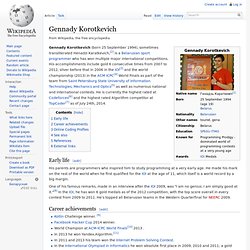 His accomplishments include gold 6 consecutive times from 2007 to 2012, silver before that in 2006 in the IOI[3] and the world championship (2013) in the ACM ICPC[4] World Finals as part of the team from Saint Petersburg State University of Information Technologies, Mechanics and Optics[5] as well as numerous national and international contests. He is currently the highest rated at Codeforces[6] and the highest rated Algorithm competitor at TopCoder[7] as of July 24th, 2014. Early life[edit] His parents are programmers who inspired him to study programming at a very early age.

Oracle SQL Hashing Tips. A Matter of Hashing We have discussed hashing in prior lessons, essentially each SQL statement is hashed and this hash value is then used to compare to already stored SQL areas, if a matching hash is found the statements are compared. 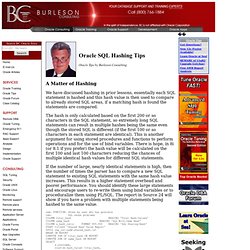 The hash is only calculated based on the first 200 or so characters in the SQL statement, so extremely long SQL statements can result in multiple hashes being the same even though the stored SQL is different (if the first 100 or so characters in each statement are identical). This is another argument for using stored procedures and functions to perform operations and for the use of bind variables.

There is hope, in 8i (or 8.1 if you prefer) the hash value will be calculated on the first 100 and last 100 characters reducing the chances of multiple identical hash values for different SQL statements. Source 24: Example Script to Report on Hashing Problems The script in Source 24 produces a report similar to that shown in Listing 23. Listing 23: Hash Report. Hashing in Oracle.

The internal workings of the Oracle RDBMS are a marvel to behold. 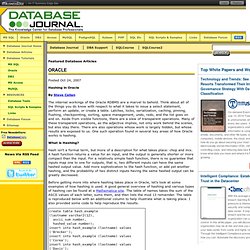 Think about all of the things you do know with respect to what it takes to issue a select statement, perform an update, or create a table. Latches, locks, serialization, caching, pinning, flushing, checkpointing, sorting, space management, undo, redo, and the list goes on and on. Aside from visible functions, there are a slew of transparent operations. Many of these transparent operations, as the adjective implies, not only work behind the scenes, but also stay there. There are also operations whose work is largely hidden, but whose results are exposed to us. What is Hashing? Hash isn’t a formal term, but more of a description for what takes place: chop and mix. 18 Managing Hash Clusters. This chapter describes how to manage hash clusters, and contains the following topics: About Hash Clusters Storing a table in a hash cluster is an optional way to improve the performance of data retrieval. 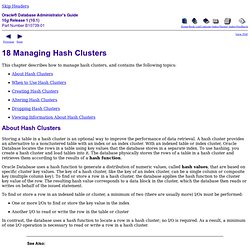 A hash cluster provides an alternative to a nonclustered table with an index or an index cluster. With an indexed table or index cluster, Oracle Database locates the rows in a table using key values that the database stores in a separate index. To use hashing, you create a hash cluster and load tables into it.

Autocomplete Data. In this document: Overview Ad groups can be targeted based on a number of targeting criteria. 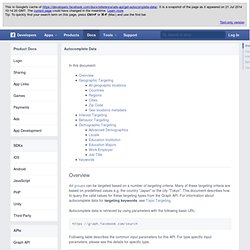 Many of these targeting criteria are based on predefined values e.g. the country "Japan" or the city "Tokyo". This document describes how to query the valid values for these targeting types from the Graph API. For information about autocomplete data for targeting keywords, see Topic Targeting. Autocomplete data is retrieved by using parameters with the following basic URL: Apple. MicroSoft Dev. Python. Go (Programming language)