How to Transform Anger in 4 Steps. Illustration by Heidi Kalyani. 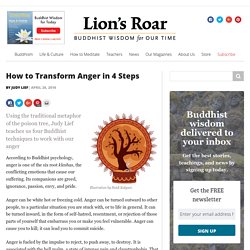 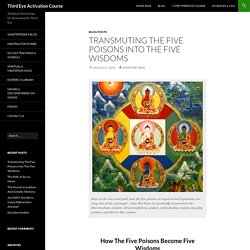 Introduction to Emotions. "Delusions are states of mind which, when they arise within our mental continuum, leave us disturbed, confused and unhappy. 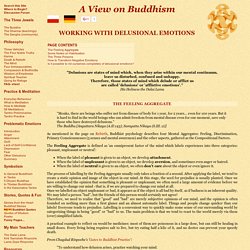 Therefore, those states of mind which delude or afflict us are called 'delusions' or 'afflictive emotions'. " His Holiness the Dalai Lama. Welcome. New to out center? 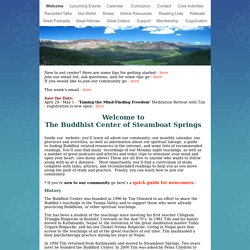 Here are some tips for getting started - here Join our email list, ask questions, and for some tips go - here If you would like to join our community go - here This week’s email - here Save the Date: Lucid Ability - Lucid Dreaming Experiments. Learn Bizarre Magic. : : L e a r n . . 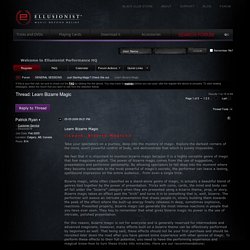 B i z a r r e . How to Design Your Dream Life and Activate Your Highest Potential, One Ritual at a Time : Lightlab Creations. Ritual dynamics is a pragmatic modality for building a lifestyle in alignment with the principles of right relation. 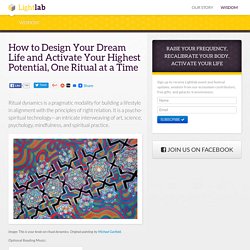 It is a psycho-spiritual technology—an intricate interweaving of art, science, psychology, mindfulness, and spiritual practice. Image: This is your brain on ritual dynamics. Original painting by Michael Garfield. Optional Reading Music: Mastery is almost universally appealing. You’d be hard-pressed to find someone who doesn’t like the idea of having an aesthetically perfect body, exhibiting perfect mental and spiritual poise, manifesting financial prosperity, or being a virtuoso pianist. Apollonian – Dionysiac – Hermetic – Persephonic. In the years 2010-12, I engaged in lengthy researches into the Eleusinian Mysteries, seeking to penetrate the veil that had descended over those secret rites with a conviction that what had been anciently concealed would have great value for modern humanity. 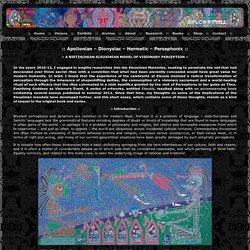 In brief, I found that the experience of the celebrants at Eleusis involved a radical transformation of perception through the inherence of shapeshifting deities, the consumption of a visionary sacrament and a world-healing ritual of such efficacy that the rites culminated in a visio beatifica granted by the visit of Persephone in her guise as Thea, Everliving Goddess as Visionary Event.

A series of artworks, entitled Eleusis, resulted along with an accompanying book containing several essays published in summer 2012. :: Introduction :: Bivalent perceptions and dynamics are common in the modern West. Talking About Ritual Magick: How I Venerate Ancestors. A recent comment from a reader asked me to reveal what I actually do to venerate my ancestors, both genetic and spiritual. 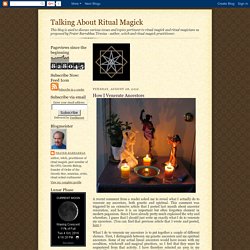 This comment was triggered by an extensive article that I posted last month about ancestor veneration, and how it is an important but often forgotten element in modern paganism. Since I have already pretty much explained the why and wherefore, I guess that I should just write up exactly what I do to venerate my ancestors. (You can find that previous article that I wrote and posted, here.) THE GREEK, INDIAN, & CHINESE ELEMENTS. The four classical elements, each originally conceived as the unique , arché, "beginning" or "original stuff," were independently proposed by early. 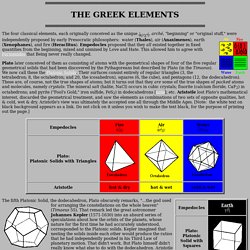 THE SCOLE EXPERIMENT - Home. French Polymath Henri Poincaré on How Creativity Works. In his fantastic 1939 Technique for Producing Ideas, James Webb Young extolled “unconscious processing” — a period marked by “no effort of a direct nature” toward the objective of your creative pursuit — as the essential fourth step of his five-step outline of the creative process. 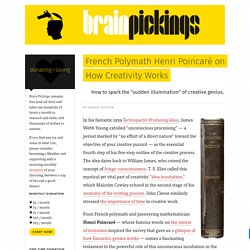 The idea dates back to William James, who coined the concept of fringe consciousness. T. S. Eliot called this mystical yet vital part of creativity “idea incubation,” which Malcolm Cowley echoed in the second stage of his anatomy of the writing process. John Cleese similarly stressed the importance of time in creative work. From French polymath and pioneering mathematician Henri Poincaré — whose famous words on the nature of invention inspired the survey that gave us a glimpse of how Einstein’s genius works — comes a fascinating testament to the powerful role of this unconscious incubation in the creative process.

The Greatest Advice For Science Fiction Writers: "Ask The Next Question" No. 6 - Theodore Sturgeon, The Next Question, Well-Meaning Scientists and The Evil They Can Cause. 2013 Feb 10 – Theodore Sturgeon, aka/Edward Hamilton Waldo, is best remembered for asking “What’s the next question?” In some portraits, you’ll see Sturgeon wearing a “Q,” with an arrow pointing forward, suspended from a thin, silver chain around his neck. He believed in questioning our assumptions. He would push further inquiry by suggesting that you “ask the next question.” Our original sin, in a sense, was our failure to pursue further inquiry.

Ask the Next Question – Solar flare (NASA -Photo Gallery) 10 Laws of Good Science Fiction « Resources for Science Fiction Writers. Author’s note: These rules are intentionally provocative, and they have generated much discussion and some intense opinions for and against. 8 Ways to Think Like an Entrepreneur. Entrepreneurs come in all shapes, sizes, ages and can be from anywhere.