Liber Officium Spirituum - Wikipedia. Liber Officiorum Spirituum (English: The Book of the Office of Spirits)[1][2] was a demonological grimoire and a major source for Johann Weyer's Pseudomonarchia Daemonum and the Ars Goetia. 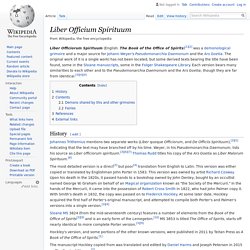 The original work (if it is a single work) has not been located, but some derived texts bearing the title have been found, some in the Sloane manuscripts, some in the Folger Shakespeare Library. Each version bears many similarities to each other and to the Pseudomonarchia Daemonum and the Ars Goetia; though they are far from identical.[3][4][4] History[edit] Johannes Trithemius mentions two separate works (Liber quoque Officiorum, and De Officiis Spirituum),[3][5] indicating that the text may have branched off by his time. Weyer, in his Pseudomonarchia Daemonum, lists his source as Liber officiorum spirituum.[3][6][7] Thomas Rudd titles his copy of the Ars Goetia as Liber Malorum Spirituum.[8] The most detailed version is a direct[3] but poor[4] translation from English to Latin. Contents[edit] ConjureMan Ali's Spiritual Blog: So you'd like to learn hoodoo...

So you’d like to learn hoodoo; well you’re in luck, I have compiled a list of valuable resources to help you on your journey to becoming an aspiring rootworker. 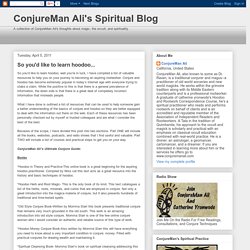 Conjure and hoodoo has become extremely popular in today’s internet age with everyone trying to stake a claim. While the positive to this is that there is a general prevalence of information, the down side is that there is a great deal of completely incorrect information that misleads people. Hoodoo in Theory and Practice by catherine yronwode: Table of Contents. Sarah Anne Lawless. A stang is a popular ritual tool in modern Traditional Witchcraft thanks to Robert Cochrane, however, the use of a forked staff is not restricted to Traditional Witchcraft and its traditions in the UK. 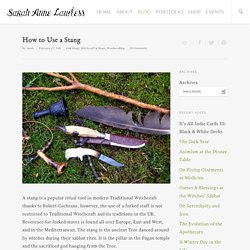 Reverence for forked staves is found all over Europe, East and West, and in the Mediterranean. The stang is the ancient Tree danced around by witches during their sabbat rites. It is the pillar in the Pagan temple and the sacrificed god hanging from the Tree. A stang is an altar and a ritual tool in one. If you have a stang you do not really need any other tools to cast circles and perform rituals or spells.

Why the fork? American Folkloric Witchcraft: Forgetting Human, pt 3 (guest post by Robin Artisson) Part III: The Amnesia Ploy and the Game of Power -The Awful Truth -Lose your Mind, Regain your Senses -They Leap for My Soul. 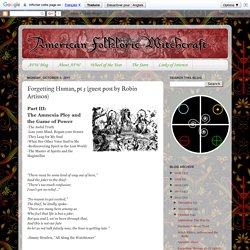 15 Habits of Great Tarot Readers. You aren’t born a great Tarot reader, your choices make you one – in particular the choices that turn into habits. 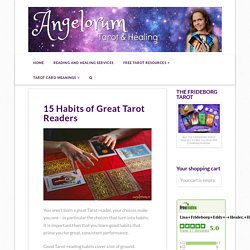 It is important then that you learn good habits that prime you for great, consistent performance. Good Tarot-reading habits cover a lot of ground. Compare being a great Tarot reader to being a great athlete, if you will. Everything is connected; To be a great athlete, you need to work out mentally as well as physically, watch what you eat and establish a healthy sleeping pattern.

Three Ways to Get the Most Out of Your Tarot Reading — Getting a Tarot reading can be both exciting and nerve-wracking, especially if you’re a first-timer. 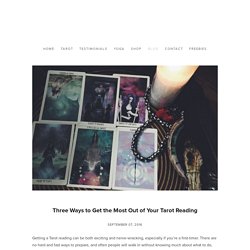 There are no hard and fast ways to prepare, and often people will walk in without knowing much about what to do, what to ask, or who they’re even getting a reading from. ‘Flower of Cities All’ I ran down Gray’s Inn Road and ran Till I was under a black bridge. 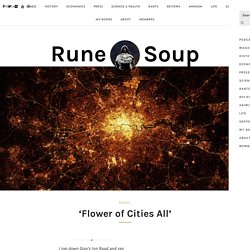 This was me at nineteen Late at night arriving between The buildings of the City of London. … Midnight. I hear the moon Light chiming on St Paul’s.The City is empty. Night Watchmen are drinking their tea,The Fire had burnt out. The Plague’s pits had closed And gone into literature.Between the big buildings I sat like a flea crouched In the stopped works of a watch. In the between space of what blogs were and what they are becoming -in person discussion, comments, social posts, actual blog posts and lived personal experience- let us see if we cannot contribute something to move discourse. Cat mentioned something in the comments of a previous post regarding pulling straight-up tech out of Kate Griffin’s magical London series of novels. Tracks In The Witchwood. Hoodoo Conjure Articles. A series of articles about hoodoo, rootwork, and African derived religious traditions hoodoo conjure magick spell spells candle occult occultism witch witchcraft money prosperity rootwork Ellegua, God of the Crossroads | Cult of the Saints A Brief Comparison of Trinidadian Obeah and Cuban Santeri | What is Santeria? 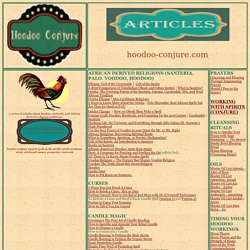 Orisha: The Evolving Forces of the Santeria, Lucumi, Candomble, IFA, and West African Tradition Orisha Ellegua | Afro-Caribbean Religions 5 Ways to Learn More About the Orisha | Palo Mayombe: Real African Spells but Are They for Good or Evil? Orisha Chango | How an Obeah Man Picks a Spell. Hoodoo Conjure Tarot Spreads. Legend has it that you can make a deal with the devil if you go to a crossroads... at a particular time, do particular things.. 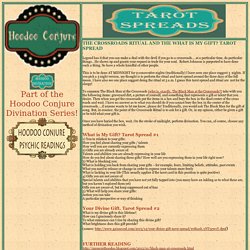 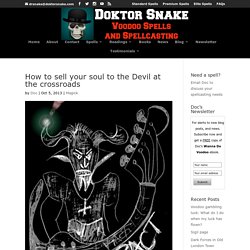 Hoodoo Hill: Crossroads Keys. Crossroads Keys This simple ritual involves taking 2 skeleton keys to the crossroads at midnight or just before dawn. The process is very simple and afterward you have a talisman to keep with you for unlocking what ever it is that you've requested. My Crossroads Keys were bound with strong red nylon thread, a strand of my hair, my spit, and vaginal fluid. Need: 2 Skeleton keys that are very similar in appearance Red ribbon, yarn, or thread that measures from your heart to your left wrist. Cubayoruba Santeria. La Bóveda Espiritual es un altar de Éggun (espíritus de ancestros), y por tanto, es un sitio de poder.

American Folkloric Witchcraft. Brujería del Cerco. Problem loading page. 12-days-of-yule. AT THE CROSSROADS: SAGITTARIUS NEW MOON - Astrology Hub. It’s no ordinary Sagittarius New Moon on Nov. 29, more like a cosmic game of pin the tail on the donkey. Astrologers around the web have some advice on finding your target, despite the blindfold. Clarissa, of Viva Combusta! , summarizes: “If you’re one of those folks who’ve felt recently that their adrenals and serotonin receptors simultaneously blew a fuse, you may as well prepare for this Sagittarius New Moon to work your last damn nerve. I’m not saying there’s no good news, but I am saying this one isn’t going to have the usual bouncy, buoyant feel typically associated with Sagittarius.” Moon at the Crossroads. You are more than your productivity. Slow the fuck down. I once heard an entrepreneur talk about how he didn’t have time to eat better — he was too busy working on his app.

He was too focused on getting shit done. He couldn’t take a break. Treading the Mill. Brujería del Cerco : Treading the Mill. How Many Cards Should I Pull? — 5 popular layouts Lenormand diviners use – Under the Cowrie Moon. Shortly after starting my Lenormand journey, I realized how different this system is from Tarot. The differences are vast, and I am not going to bore you with all of them. But one of the things that struck me early on is the methodological significance behind the amount of cards chosen for a reading.

The Secret Teachings – Wisdom is not bestowed, it is achieved (rdgable@yahoo.com) Vajrayana (Tantric) Buddhism - Guide to Buddhism & Buddhist Sculpture in Japan. Know More About Cards. 42 Ways to Build a Liberated Society Beyond Capitalism. Insurrection and Utopia, Part 1: “We are Eating From a Trashcan; This Trashcan is Ideology.” – GODS & RADICALS. Was Jesus A Magician? The golden verses of Pythagoras - Wikipedia. The Clan of Tubal Cain. Folk Magick as Insurrection. How to Use Magical Baths in Hoodoo/Rootwork for Cleansing, Luck, Love, Money, and Protection - Dr. E. Products - ConjureDoctor.com. How To Use Mojo Bags : ConjureDoctor.com - Home of Dr. E. Hoodoo Products and Magical Services, Get What You Want! Esbats & Sabbats. Against Tradition: Anarchism in a Magical Context – GODS & RADICALS. How to set up an anti-fascist group. Anarquismo Y Antifascismo en Mexico.