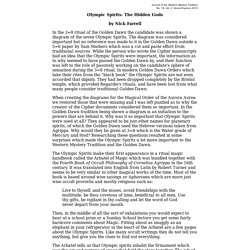 The diagram was considered important but no reference was made to it in the Golden Dawn outside a 5=6 paper by Sam Mathers which was a cut and paste effort from traditional sources. While the person who wrote the Cipher manuscripts had an idea that the Olympic Spirits were important, the information as to why seemed to have passed the Golden Dawn by, and their function was left to the role of passively working on the candidate's sphere of sensation during the 3=8 ritual. In modern Golden Dawn Orders which take their rites from the “black book” the Olympic Spirits are not even accorded that dignity. SATHYAM SHIVAM SUNDARAM: Práctica y rezos a Ganesha. Lists Archives - Unbound Worlds. Between God & The Devil: Mexico's Land of Sorcerers.

Ravachol. An American Retrograde – GODS & RADICALS. “The fall of peoples and mankind will invite me to my rise.”- Max Stirner, The Ego and His Own Perhaps the fates had finally turned against humanity. 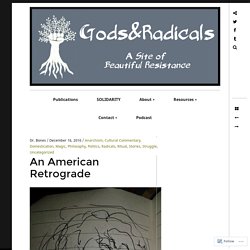 What other explanation existed for a mercury retrograde coming right after the most batshit election the American people had ever suffered? Everything was an abysmal mix of high comedy and cosmic terror. Mexico: Fifty Anarchist Groups at War Against Capitalism and the State. From ContralíneaTranslation submitted to It’s Going Down* all footnotes by translator In Mexico there is an ongoing anarchist insurrection, with 50 groups and cells at war with the State and capital. 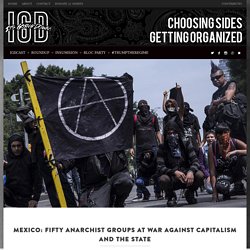 The seriousness of the “black threat” has caused the National Risk Agenda [1] to give it priority attention, ahead of the red guerrillas[2], with only drug trafficking and social uprisings given a higher priority. Let the night illuminate and rock the city; let the roar awaken the powerful in their bondage. May the sound of bullets stir the repressive arms; and shake their civil and financial temples. The Sacred Conspiracy by Georges Bataille 1936. Adventures In Witchery. Ritual Offerings. Simon Magus. 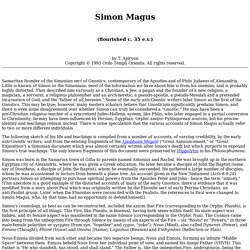 Apiryon Copyright © 1995 Ordo Templi Orientis. All rights reserved. Samaritan founder of the Simonian sect of Gnostics, contemporary of the Apostles and of Philo Judaeus of Alexandria. Little is known of Simon or the Simonians, most of the information we have about him is from his enemies, and is probably highly distorted. Simon Magus. Back to Home Page or Contents Page or People or Index Simon Magus Simon Magus was labeled "the father of all heretics" by Irenaeus in the Preface of his "Against Heresies, III. 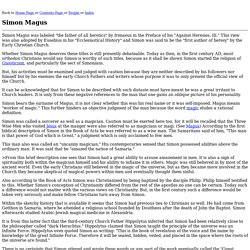 " This view was also adopted by Eusebius in his "Ecclesiastical History" and Simon was said to be the "first author of heresy" by the Early Christian Church. Simon Magus, by G.R.S. Mead. Everybody in Christendom has heard of Simon, the magician, and how Peter, the apostle, rebuked him, as told in the narrative of the Acts of the Apostles. 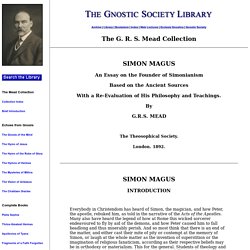 Many also have heard the legend of how at Rome this wicked sorcerer endeavoured to fly by aid of the demons, and how Peter caused him to fall headlong and thus miserably perish. And so most think that there is an end of the matter, and either cast their mite of pity or contempt at the memory of Simon, or laugh at the whole matter as the invention of superstition or the imagination of religious fanaticism, according as their respective beliefs may be in orthodoxy or materialism. This for the general. Paul the Apostle, Simon Magus, and a Curious Gospel. One of the most notorious arch-heretics of early Christianity was an enigmatic figure known as Simon Magus (Simon the Magician) or Simon of Samaria. 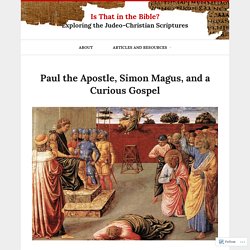 In case you’re not familiar with him, here’s a brief run-down on what various texts say about him: According to Josephus (Antiquities XX.7 §2), there was a Cypriot named Simon who pretended to be a magician, and he was a personal friend of Felix, the procurator of Judea (52–58). Acting on behalf of his friend, Simon persuaded the beautiful Drusilla, the sister of king Agrippa II, to leave her husband and marry Felix.In Acts 8, there is a character named Simon who has bewitched the people of Samaria with his magic. He converts to Christianity at the preaching of the evangelist Philip, but is rebuked by Peter for trying to purchase Peter and John’s spiritual abilities with money.Justin Martyr (First Apology I.26) wrote of a Samaritan named Simon who was venerated by some as a god in Rome and elsewhere because of his magic.