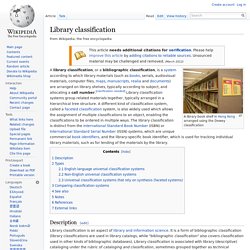 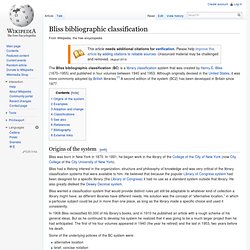 Bliss (1870–1955) and published in four volumes between 1940 and 1953. Although originally devised in the United States, it was more commonly adopted by British libraries.[1] A second edition of the system (BC2) has been developed in Britain since 1977. Origins of the system[edit] Bliss was born in New York in 1870. In 1891, he began work in the library of the College of the City of New York (now City College of the City University of New York). Bliss had a lifelong interest in the organization, structure and philosophy of knowledge and was very critical of the library classification systems that were available to him. Bliss wanted a classification system that would provide distinct rules yet still be adaptable to whatever kind of collection a library might have, as different libraries have different needs. Some of the underlying policies of the BC system were: Faceted classification. Definition[edit] Faceted classification is used in faceted search systems that enable a user to navigate information along multiple paths corresponding to different orderings of the facets. 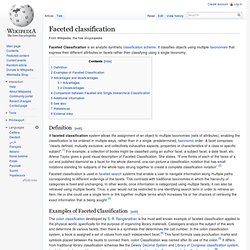 This contrasts with traditional taxonomies in which the hierarchy of categories is fixed and unchanging. In other words, once information is categorized using multiple facets, it can also be retrieved using multiple facets. Thus, a user would not be restricted to one identifying search term in order to retrieve an item. He or she could use a single term or link together multiple terms which increases his or her chances of retrieving the exact information that is being sought [3] Colon classification. Colon classification (CC) is a system of library classification developed by S. 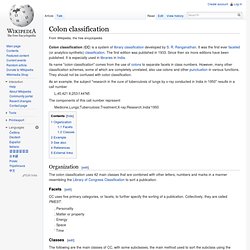 R. Ranganathan. It was the first ever faceted (or analytico-synthetic) classification. The first edition was published in 1933. Since then six more editions have been published. As an example, the subject "research in the cure of tuberculosis of lungs by x-ray conducted in India in 1950" results in a call number L,45;421:6;253:f.44'N5 The components of this call number represent Medicine,Lungs;Tuberculosis:Treatment;X-ray:Research.India'1950 Organization[edit] The colon classification uses 42 main classes that are combined with other letters, numbers and marks in a manner resembling the Library of Congress Classification to sort a publication. Facets[edit] CC uses five primary categories, or facets, to further specify the sorting of a publication. . , Personality ; Matter or property : Energy . ' Time. Universal Decimal Classification. The Universal Decimal Classification (UDC) is a bibliographic and library classification developed by the Belgian bibliographers Paul Otlet and Henri La Fontaine at the end of the 19th century. 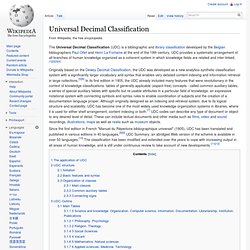 UDC provides a systematic arrangement of all branches of human knowledge organized as a coherent system in which knowledge fields are related and inter-linked.[1][2][3][4] Since the first edition in French "Manuel du Répertoire bibliographique universel" (1905), UDC has been translated and published in various editions in 40 languages.[8][9] UDC Summary, an abridged Web version of the scheme is available in over 50 languages.[10] The classification has been modified and extended over the years to cope with increasing output in all areas of human knowledge, and is still under continuous review to take account of new developments.[11][12] The application of UDC[edit] UDC is used in around 150,000 libraries in 130 countries and in many bibliographical services which require detailed content indexing.