A 37-Year-Old Mandarin Song is Now a Global TikTok Sensation. Thanks to TikTok, a Mandarin language song from the ’80s is now bringing together Chinese aunties and Norwegian teens. 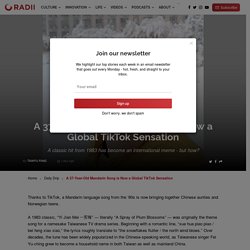 A 1983 classic, “Yi Jian Mei 一剪梅” — literally “A Spray of Plum Blossoms” — was originally the theme song for a namesake Taiwanese TV drama series. Beginning with a romantic line, “xue hua piao piao / bei feng xiao xiao,” the lyrics roughly translate to “the snowflakes flutter / the north wind blows.” Over decades, the tune has been widely popularized in the Chinese-speaking world, as Taiwanese singer Fei Yu-ching grew to become a household name in both Taiwan as well as mainland China. Though Fei bid farewell to his audience when he retired in November, marking the end of his 47 year-long career, he would never have imagined the song to become a global internet sensation in just a few months.

To Chinese in America: Black Lives Matter Is Our Fight Too. Chinese immigrants in the US are no strangers to racism, but it’s a shame that simply experiencing it is not enough to imbue full knowledge of its insidious structure and history. 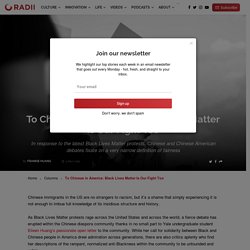 As Black Lives Matter protests rage across the United States and across the world, a fierce debate has erupted within the Chinese diaspora community thanks in no small part to Yale undergraduate student Eileen Huang’s passionate open letter to the community. While her call for solidarity between Black and Chinese people in America drew admiration across generations, there are also critics aplenty who find her descriptions of the rampant, normalized anti-Blackness within the community to be unfounded and unfair. It’s not hard to understand why so many people within the American Chinese community are feeling defensive. Related: A New Site to Report Racist Attacks Against Asian-Americans Received 1,000+ in Two Weeks We respect hard work, they say, we respect ingenuity.

You may also like: From W.E.B. What Facebook Needs to Learn from WeChat’s Group Chat Pains. Note: This article by Rui Zhong was originally published by TechNode. 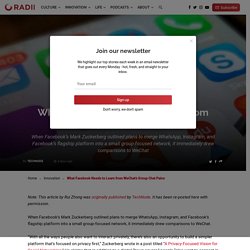 It has been re-posted here with permission. When Facebook’s Mark Zuckerberg outlined plans to merge WhatsApp, Instagram, and Facebook’s flagship platform into a small group-focused network, it immediately drew comparisons to WeChat. Is McDonald's Serving Chinese Food in the US? They’re deep-fried, crispy, and covered in cinnamon. 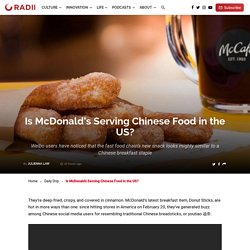 McDonald’s latest breakfast item, Donut Sticks, are hot in more ways than one: since hitting stores in America on February 20, they’ve generated buzz among Chinese social media users for resembling traditional Chinese breadsticks, or youtiao 油条. The youtiao, a popular breakfast food often paired with soy milk or rice congee, is well loved in East and Southeast Asia — so much so that Mandopop star JJ Lin even named a song after it (it was slick and saccharine). Who is Angelababy? 6 Quick Facts on Vogue's Cover Star. Vogue‘s US edition has selected 14 “global actors who know no limits” for its April cover story, putting Doona Bae and Deepika Padukone on either side of Scarlett Johansson in one version of the cover itself, and Adesua Etomi-Wellington and Angelababy flanking Elizabeth Debicki and Léa Seydoux on another. 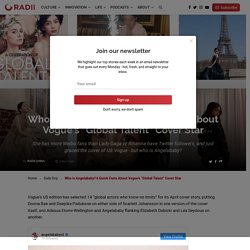 Angelababy is one of China’s most recognizable celebrity faces (especially since Fan Bingbing has disappeared from view) and is described by Vogue as “the Kim Kardashian of China” — yet she’s far from a household name outside of the country. Here are six quick facts to help you get up to speed on the star: She has 100,376,984 fans (and counting) on Sina Weibo How Weibo celebrated Angelababy breaking the “Fans Hundred Million” barrier last month. China Explained: How Western Fast Food Won Over China. China Explained is a RADII series breaking down the basics about Culture, Innovation and Life in the country today. 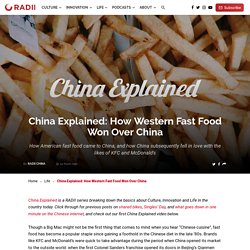 Click through for previous posts on shared bikes, Singles’ Day, and what goes down in one minute on the Chinese internet, and check out our first China Explained video below. Though a Big Mac might not be the first thing that comes to mind when you hear “Chinese cuisine”, fast food has become a popular staple since gaining a foothold in the Chinese diet in the late ‘80s. Brands like KFC and McDonald’s were quick to take advantage during the period when China opened its market to the outside world: when the first Colonel Sanders franchise opened its doors in Beijing’s Qianmen neighborhood in 1987, more than 2,000 buckets of fried chicken were sold in a single day.

Digitally China Podcast: Are We Already Enslaved to AI? Digitally China is a bi-weekly podcast from RADII hosted by Tom Xiong and Eva Xiao, and produced by Jacob Loven. 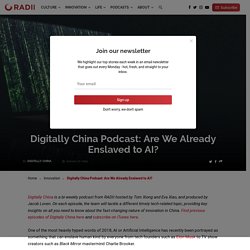 On each episode, the team will tackle a different timely tech-related topic, providing key insights on all you need to know about the fast-changing nature of innovation in China. Find previous episodes of Digitally China here and subscribe on iTunes here. One of the most heavily hyped words of 2018, AI or Artificial Intelligence has recently been portrayed as something that can enslave human kind by everyone from tech founders such as Elon Musk to TV show creators such as Black Mirror mastermind Charlie Brooker.

For the latest Digitally China episode we have a special guest, Nicholas Young, to talk about this topic. Together we discuss what AI actually is, what it is used for currently, what the future will look like, and whether we are actually already enslaved by AI.