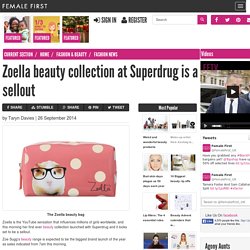 Zoe Sugg’s beauty range is expected to be the biggest brand launch of the year as sales indicated from 7am this morning. Anticipation has been high with the launch trending on Twitter for days as fans across the world have been tweeting about the collection of beauty, bath and body products. The Superdrug.com launch today saw the social media sweetheart sell thousands of products in just minutes, with over ten per cent of shoppers yesterday logging on to the Zoella pages of the Superdrug website before it was even on sale. YouTube Creator Stories: How Zoella Brought the Best Out of Her Channel – Think Insights – Google. Zoe Sugg – better known on YouTube as Zoella – has been on the platform since 2009, emerging as one of the leading YouTubers in the beauty and fashion vertical. 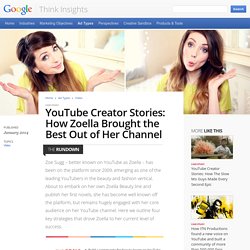 About to embark on her own Zoella Beauty line and publish her first novels, she has become well known off the platform, but remains hugely engaged with her core audience on her YouTube channel. Here we outline four key strategies that drove Zoella to her current level of success. #1: Be authentic, accessible and approachable Although Zoella's breakthrough success is more recent (going from one million subscribers to over five million in the past 12 months), she has spent several years honing her craft, building her audience and finding her voice on YouTube. YouTube star Tanya Burr launches beauty brand - MailOnline - The Mail on Sunday Diary.

Last night we hot-footed it over to one of our favourite West End hotels, The Sanderson, for the launch of YouTuber Tanya Burr's new lip gloss and nail polish collection. 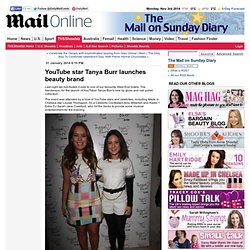 The event was attended by a host of YouTube stars and celebrties, including Made in Chelsea star Louise Thomspon, I'm a Celebrity Contestant Amy Willerton and Radio 1 Extra DJ Sarah-Jane Crawford, who hit the decks to provde some musical entertainment for the evening. The woman of the hour, Tanya Burr, with Made in Chelsea star Louise Currently available only through online retailer FeelUnique.com, the Tanya Burr Lips and Nails range for eyeCANDY has already caused a sell-out sensation among her fans, with a spokesperson for FeelUnique confirming that the waiting list for the lip gloss and nail polish range - over 5,500 people - was the longest that the website had ever had. Speaking to us at the launch, the beauty blogger said: 'I'm so pleased that so many people are here to celebrate the range.

Meet the vloggers: Self employed and 'worth a fortune' - BBC Newsbeat. In theory, anyone can video blog, or 'vlog', as long as they have a camera, an internet connection and something to say. 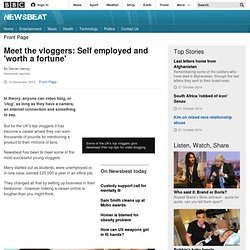 But for the UK's top vloggers it has become a career where they can earn thousands of pounds for mentioning a product to their millions of fans. Newsbeat has been to meet some of the most successful young vloggers. Many started out as students, were unemployed or, in one case, earned £25,000 a year in an office job. They changed all that by setting up business in their bedrooms - however making a career online is tougher than you might think. None of the vloggers wanted to reveal exactly how much they earn. Zoella: vlogger tipped to top the Christmas book chart. She inspires extraordinary devotion among her fans, with young girls regarding her as a big sister and teenage girls wishing she was their best friend. 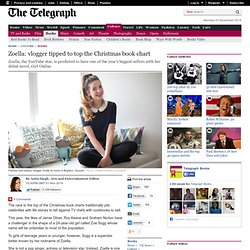 Spotting Zoella’s ability to tap into the teen demographic, publishers fought to snap her up. Zoella signed a two-book deal with Penguin and the first of these, a debut novel called Girl Online, is predicted to be the year’s fastest-seller when it is released on November 25 just in time for the Christmas market. The story of a teenage girl who writes a blog about school, boys and her “mad” family is being published in 15 languages and is in Amazon’s top five best-selling children’s books on the strength of pre-orders alone. “Zoella has this huge fan base. Zoella: The squeaky clean big sister no teen should be without. The beauty vloggers earning mega-bucks from their bedrooms: We reveal the secret to their success.

Forget training to become a lawyer or a top city investment banker, it seems nowadays you can earn mega bucks without even having to leave your bedroom. 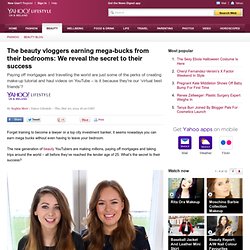 The new generation of beauty YouTubers are making millions, paying off mortgages and taking trips around the world – all before they’ve reached the tender age of 25. What’s the secret to their success? Tanya Burr and Zoe Sugg aka Zoella are two of the most popular beauty YouTubers [YouTube] How they make their money The new generation of star doesn't need a TV show to launch their career. Instead, they are self-recording in their home environment, covering everything from make-up tutorials to best buys to diary entries on their lives.

Uploading videos at least once a week, the vloggers (that's video bloggers) have nurtured loyal fan bases of upwards of a million and have social followings (Twitter, Facebook, Tumblr and Instagram) to match. Meet the vloggers: Self employed and 'worth a fortune' - BBC Newsbeat. Zoella, Tanya Burr and the UK's YouTube superstars. Covering beauty, fashion, relationship advice, skits and general musings on life as a twentysomething, they cater to millions of viewers who await each new upload with the same eagerness you would expect from a devoted One Direction fan queueing for concert tickets. 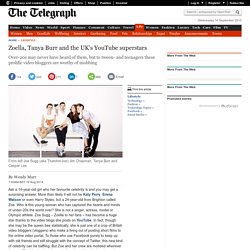 This audience is growing fast. ‘We have just done a convention in America called Vidcon [an annual meeting of people interested in online video]. It has been going for four years,’ Smales says. Zoella is a great role model - She Changed my Life. Blogging has exploded in the last few years. 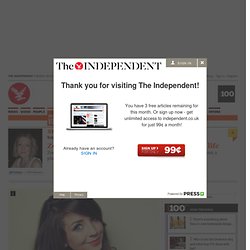 It’s the new cool-gang that everyone is allowed to be a part of, and women like Zoe Sugg (Zoella’s real name) lead the way when it comes to digital stardom. As a student eager for a full-time media career, I started my blog as way of demonstrating to potential employers that I am able to run a digital platform. But it has become so much more than that. Through blogging I’ve made friends for life, gone to some amazing events, built relationships with brands and readers, and most worked for some of the biggest publishing names in the UK. It may look like an easy task, but building a successful brand takes hard work. Of course, teenage girls need role models – but not like beauty vlogger Zoella - Comment - Voices - The Independent. Zoella is a beauty and fashion vlogger – the latest creation spat out by the YouTube machine to instruct young girls how to paint on the perfect smoky eye or red lip. 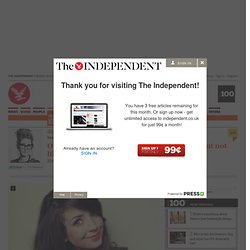 As her subscriber count sky-rocketed, Zoella – real name Zoe Sugg – began to offer more than beauty advice to her young admirers. She has vlogged about her anxiety and recently joined mental-health charity Mind as a digital ambassador. She now has a Penguin book deal, a bespoke beauty range, and two Teen Choice awards to her name, but continues to upload videos to her YouTube channel in which she squeals with excitement over new brands of mascara.

She is the epitome of a 21st-century social media megastar – an inspiration to tween girls, and not just because she’s trodden an easy-peasy path to fame and fortune. Unfortunately, Zoe’s (sorry, Zoella sticks in my throat and on my keyboard) particular brand of sickly sweet girl power brings me out in hives. Zoella is bigger than Beyonce on YouTube – but who is Zoe Sugg? - News - Gadgets and Tech - The Independent. The online star has more than 6.2million subscribers, was reported to have earned £300,000 in one year, and huge video billboards of her have sprung up in Westfield shopping centres. 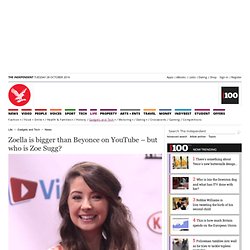 But who is she and why is she relevant? These are questions on many people's lips as they are forced to sit through an advert promoting her fashion and beauty channel before the YouTube video of their choice. YouTube launches primetime ads for Vice News, Zoella and Slow Mo Guys. YouTube channels Vice News, Zoella and The Slow Mo Guys will soon be familiar to millions more Brits, thanks to mainstream advertising campaigns funded by Google’s online video service. YouTube is paying to run TV, print and billboard ads in the UK for the three channels, as well as running online ads on its own and other websites. The campaigns follow the launch of similar ads for prominent YouTube channels in the US earlier in the year, including YouTubers Bethany Mota, Michelle Phan and Rosanna Pansino. In the UK, Vice News, Zoella and The Slo Mo Guys will feature in 30-second YouTube-branded TV commercials running around primetime shows including X Factor.

The young vloggers and their fans who are changing the face of youth culture. The popularity of independent young video bloggers, the "vloggers" who film their thoughts and observations for thousands of followers to enjoy online, is already setting the future shape of marketing and advertising. But it is also becoming an important route into traditional careers in print publishing or television, according to Alfie Deyes, the vlogger with more than three million subscribers who was mobbed by 8,000 fans at his book launch earlier this month. Speaking to the Observer after the publicity furore surrounding the publication of his first volume, The Pointless Book, which already tops the Amazon bestsellers list, Deyes, 21, said he would consider moving into the world of conventional, networked television and radio if he was in charge of the content.

"Having creative control, as well as carrying out the whole process myself – shooting, editing and post-production – of all my videos is important," he said, "but I would not completely reject TV. Zoe Sugg's YouTube success wins her two-book deal for novels. Zoe Sugg, a 24-year-old from Brighton whose YouTube videos are watched by more than 12 million people every month, has been signed up by Penguin to begin a career as a novelist.

Sugg, known online as Zoella, started her YouTube channel and her blog in 2009, covering beauty and fashion, but also issues such as anxiety, self-esteem, and cyber-bullying. She now has 4.9 million YouTube subscribers, 1.6 million Twitter followers and two million Instagram followers. Penguin announced on Tuesday that it had bought two novels from Sugg, who it said had won "a legion of teenage fans across the globe" with her "girl-next-door personality". American and Canadian rights in the books were sold in 24 hours to Atria Books. Sugg's first novel, Girl Online, is "a modern-day Notting Hill for teens", according to Penguin, in which "an ordinary 15-year-old girl's relationship with an American pop star goes viral as her anonymous blog is exposed to the world". The book will be published this November.