Mark Dumas shares his swimming pool and his BED with a polar bear. Mark Dumas, in British Columbia, takes regular naps with polar bear Agee The full-size adult female stands at over seven feet when on her hind legs Bear trainer Dumas has spent more than 40 years in the bizarre industry New documentary follows the amazing lives of people who live with bears By Imogen Calderwood and Flora Drury For Mailonline Published: 16:31 GMT, 10 September 2015 | Updated: 18:28 GMT, 10 September 2015 Some people dream of swimming with dolphins, while others have nightmares about swimming with sharks. 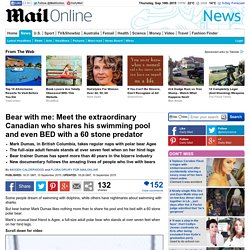 But bear trainer Mark Dumas likes nothing more than to share his pool and his bed with a 60 stone polar bear. Mark's unusual best friend is Agee, a full-size adult polar bear who stands at over seven feet when on her hind legs. Scroll down for video Dicing with death: It may seem like bear trainer Mark Dumas, from British Columbia, is risking his life by living with polar bear Agee, but the two share a remarkable bond. Big Crazy Family Adventure travel round world using everything EXCEPT planes. Bruce Kirkby and his wife Christine Pitkanen took their two sons aged three and seven on a holiday of a lifetimeThey travelled by canoe, carrier ship, tuk-tuk, riverboat and even a yak as they went from Canada to the HimalayasTheir adventures were filmed as part of a nine-episode series, which saw them reach a remote Buddhist monastery By Becky Pemberton For Mailonline Published: 06:06 GMT, 3 September 2015 | Updated: 09:08 GMT, 3 September 2015 Travelling with children is a challenge for most parents - so the mother and father who took their two boys, three and seven, on a 13,000 mile journey from Canada to the Himalayas without a single plane journey deserve the utmost respect. 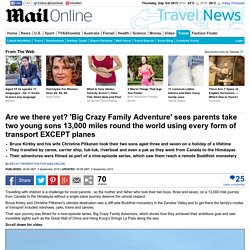 Bruce Kirkby and Christine Pitkanen's ultimate destination was a cliff-side Buddhist monastery in the Zanskar Valley and to get there the family's modes of transport included rickshaws, yaks, trains and canoes. Scroll down for video The Kirkby family set off on their Big Crazy Family Adventure. Rebecca Poulson on family's story of survival after triple family murder-suicide. In 2003 Neung Kongsom murdered his two children and father-in-lawHe threatened to destroy the Poulson family in a suicide noteRebecca Poulson has written about the tragedy in a book, Killing LoveThe book is the story of how the devastated Poulsons survived it all By Candace Sutton for Daily Mail Australia Published: 03:20 GMT, 30 August 2015 | Updated: 05:34 GMT, 30 August 2015 Some time after 1.30 on the afternoon of Friday September 30, 2003, Ingrid Poulson arrived on a scene of unimaginable horror after which she would say 'I stand among the souls of the dead'. 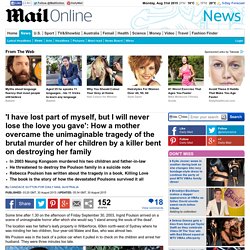 The location was her father's leafy property in Wilberforce, 60km north-west of Sydney where he was minding her two children, four-year-old Malee and Bas, who was almost two. Ms Poulson was in the back of a police car when it pulled in to check on the children and arrest her husband. Lying in the driveway were four people. Ingrid Poulson got out of the car first and saw the unimaginable.

Men who tackled French train gunman are awarded the Legion d'Honneur. Four men awarded the Legion d'Honneur by President Francois HollandeMr Hollande said their intervention on train prevented'veritable carnage'First passenger who wrestled gunman was U.S professor Mark Moogalian Ripped AK-47 from Ayoub El-Khazzani who shot him in neck with handgun His sister said: 'He thought he was losing so much blood he would die' 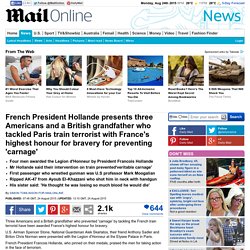 The secrets of Ukraine's shameful 'Holocaust of Bullets' WARNING: GRAPHIC CONTENTJews were humiliated and murdered one by one in Ukraine during WW2 Many of them were forced to stand in front of mass graves and shot dead Women were stripped naked, beaten in the streets during 'organised riots'Witnesses today have broken their silence to tell of Ukraine's killing centre By Will Stewart for MailOnline Published: 10:12 GMT, 24 August 2015 | Updated: 14:12 GMT, 24 August 2015 Seventy years on from the end of the Second World War the full, shocking scale of the Nazi-inspired Holocaust in Ukraine is finally being revealed - thanks to pioneering work by a French Catholic priest to research the truth of the industrial-scale killing. 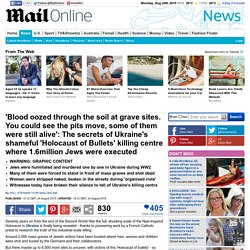 Pictured: Moroccan terrorist, 26, who was taken down by hero US airman and his friends after opening fire on French train - as it emerges he 'fought with ISIS in Syria and was known to FOUR intelligence agencies' By Sophie Jane Evans and Wills Robinson For Dailymail.com and Keiligh Baker and Darren Boyle for MailOnline and Nick Fagge In Paris, France For Mailonline Published: 23:31 GMT, 22 August 2015 | Updated: 00:35 GMT, 23 August 2015 This is the heavily-armed suspected terrorist with ties to radical Islam who was overpowered by passengers on a train from Amsterdam to Paris. 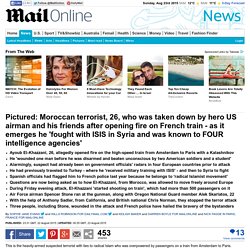 Ayoub El-Khazzani, 26, is being quizzed by French counter-terrorism police after he allegedly opened fire on the high-speed train with a Kalashnikov. Ynet 8 תופעות הבריאות המוזרות שיש רק לג'ינג'ים. 17 איורים מצחיקים שמוכיחים איך העולם השתנה לרעה! Iran's ayatollah 'publishes 416-page guide to destroying Israel and rails against US' Ali Khamenei, the Islamic country's Supreme Leader, reportedly wrote bookEntitled Palestine, the tract is said to outline method of wiping out IsraelKhamenei is said to plan to harass Jews from the country with endless war of attritionWould then attempt to engineer vote to establish Palestinian state insteadBook disparages Israel as being 'ally of the American Great Satan'President Obama is currently trying to convince Congress to approve his deal with the nation on their nuclear program. 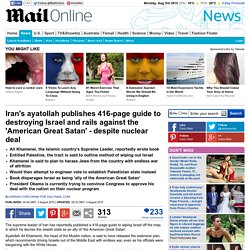 Adrian Gonzalez 'duct taped 8-year-old Maddy Middleton girl before raping and murdering her' Adrian Jerry Gonzalez, 15, charged with murder for allegedly luring, kidnapping, sexually assaulting and killing Madyson Middleton Gonzalez had been suicidal and allegedly killed Middleton to see how people will react, source said The 8-year-old went missing in Santa Cruz, California, SundayHer body was later found in a recycling bin as her alleged killer was lurking nearbyGonzalez posted video on Instagram that day showing him playing a song about death Officers arrested Gonzalez after he was seen near the bin during the searchNeighbors were shocked, insisting the 15-year-old was well-liked and was known in the community for his yo-yo skills A friend from middle school said Gonzalez was depressed and would call her at night threatening to kill himself By Snejana Farberov For Dailymail.com Published: 14:22 GMT, 30 July 2015 | Updated: 20:00 GMT, 30 July 2015 Gonzalez briefly appeared at the Santa Cruz County courthouse but did not enter a plea. 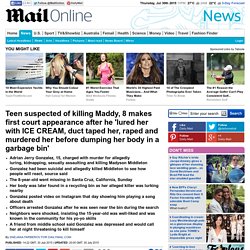 Adrian Gonzalez 'duct taped 8-year-old Maddy Middleton girl before raping and murdering her' Kidnap victim Hannah Anderson to be questioned in court over her six-day ordeal as captor's family sues FBI for gunning him down. Teenager is to be deposed in wrongful death suit brought by sister of Jim DiMaggio against the FBI DiMaggio kidnapped Anderson and murdered her mother and younger brother then went on run He was shot and killed by FBI tactical agent ending six-day ordeal which began in San Diego County, California and ended in wilderness in IdahoNow his sister claims he was 'stalked' and 'executed' by law enforcement and alleges he should not have been shot By Laura Collins For Dailymail.com Published: 19:17 GMT, 30 July 2015 | Updated: 20:38 GMT, 30 July 2015 Hannah Anderson is to be deposed in a wrongful death suit being brought against the FBI by the sister of the man accused of kidnapping her, Daily Mail Online can reveal. 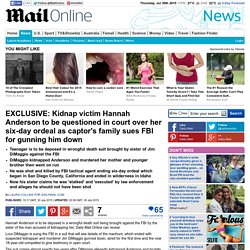 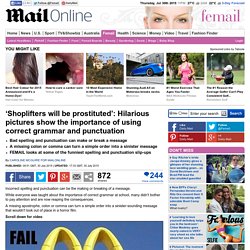 While everyone was taught about the importance of correct grammar at school, many didn't bother to pay attention and are now reaping the consequences. La Reunion beach cleaner may have solved the mystery of MH370. Johnny Begue discovered 6ft wing flap which experts believe comes from a Boeing 777 like Malaysian Airlines planeHe also found a battered suitcase on the same beach as the debris, saying: 'It's really weird, it gives me the shivers' Debris was found on island of La Reunion, east of Madagascar, some 3,500 miles from last-known location of MH370If confirmed, a massive air, land and sea search operation is expected to get under way in the area for other debris By Simon Tomlinson and Richard Shears and John Stevens In Kuala Lumpur and Darren Boyle for MailOnline Published: 07:44 GMT, 30 July 2015 | Updated: 18:04 GMT, 30 July 2015 A humble beach cleaner today told of the moment he stumbled across plane wreckage on an Indian Ocean island, sparking a storm of speculation around the world that it belonged to missing flight MH370.

Johnny Begue was strolling along looking for a pebble to grind up chillies when he suddenly discovered a 'weird thing on the shore'. Dr Joel Salinas FEELS what patients are going through due to synesthesia condition. Dr Joel Salinas has suffered mirror-touch synesthesia since childhoodMeans he experiences the same sensations he observes in other peopleIf he watches two people hugging, Dr Salinas feels the sensation of a hugSays it has 'empowered' him, breaking down barriers with patients By Lizzie Parry for MailOnline Published: 11:34 GMT, 29 July 2015 | Updated: 12:12 GMT, 29 July 2015 It is an expression widely used...

Shaunna Broadway, 26, of Vinita, enrolled her children in Happiness Is a Learning Center, but has now filed a police report after they were taken to a local mini water park and not given sunscreen. Photographer Maja Topcagic captures portraits of redhead women to show the beauty of freckles. Maja Topcagic, 25, from Sarajevo in Bosnia, captures portraitsPhoto-series, 'Freckled', includes models with various shades of red hairMaja wants to disprove that freckles are 'undesirable and unsightly' By Maybelle Morgan For Mailonline Published: 08:59 GMT, 28 July 2015 | Updated: 11:55 GMT, 28 July 2015 A freckled woman lies on a patch of grass, tendrils of flame-coloured hair spread out behind her; the scene littered with constrasting white daises.

Robert Bever, 18, and his brother were arrested after the bodies of their parents and three younger siblings were discovered at home in Oklahoma Police said on Friday that Bever has given them a full confession He allegedly told them it was just the start of a string of murdersPlanned to murder people outside of the family too, according to officers His parents David and April Bever, their seven-year-old daughter and two sons, aged five and 12, were killed with a hatchet on Wednesday nightAnother daughter, 13, is in a serious condition in hospital, while her two-year-old sister was unharmed during the attack in Broken Arrow.

250 whales massacred by locals on beach in the Faroe Islands. WARNING: GRAPHIC CONTENTThe brutal slaughtering of pilots whales took place at Bøur and Tórshavn in the Faroe IslandsLocals dressed in wetsuits wade into the water, and use knifes and harpoons to kill the stranded whalesAlthough whaling is illegal in Denmark, the annual hunt, known as the grindadráp, is allowed in the Faroe Islands. Photographer Joe Quint's poignant pictures of America's victims of gun crime. Joe Quint from Brooklyn has photographed survivors of gun violence and families of gun violence victims in an ongoing project called It Takes UsFollowing the repeated mass shootings that have gripped the nation, including the most recent tragedy in Louisiana, Quint said gun violence has become accepted as a part of life Through his photo project, he hopes it will create dialogue and action that will lead to meaningful change.

Gang of men 'force two couples to strip and then rape women in front of their boyfriends' Detroit police are searching for suspects who allegedly attacked at least two couples, forcing the male to watch as female was gang rapedCouples were robbed and stripped of their clothes in each attackPolice say men took turns sexually assaulting womenResidents in area want men caught and arrested immediately.

True Life: I'm A Rich Kid. Hamptons. Extremely Accurate Charts for Book Nerds. 11 Charts That Accurately Sum Up Being A Book Nerd. Annie Nolan attaches sign to her twins after growing fed up with strangers. Annie Nolan, 26, is mum to two-year-old twin girls, Delphine and CheskaThe blogger is constantly asked the same questions about her kidsAnnie, from Melbourne, decided to write the answers to her FAQs on signs She uploaded a snap of her girls holding them in their prams to FacebookThe post has been viewed more than two million times in two days By Heather Mcnab for Daily Mail Australia.