Author Dan Josefson Discusses His Novel, THAT'S NOT A FEELING. It feels strange to give anyone advice about writing a book, especially about how to write one that will appeal to both adults and young adults. 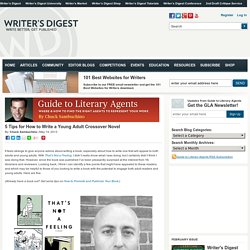 With That’s Not a Feeling, I didn’t really know what I was doing, but I certainly didn’t think I was doing that. However, since the book was published I’ve been pleasantly surprised at the interest from YA librarians and reviewers. Looking back, I think I can identify a few points that might have appealed to these readers, and which may be helpful to those of you looking to write a book with the potential to engage both adult readers and young adults. Here are five. (Already have a book out? Guest column by Dan Josefson, author of the 2012 crossover novel,THAT’S NOT A FEELING, a Booklist Editors’ Choice of 2012 Adult Books for Young Adults. 1. . (11 Frequently Asked Questions About Book Royalties, Advances and Money.) 2. Teenagers interested in books written for adults are generally extremely capable and insightful readers. 3. 4. 5. What Makes A Good YA Novel? (How To Write For Young Adults) - MatthewKadish.com. As a writer of Young Adult fiction, I often ask myself – “Self, what the heck am I doing?” 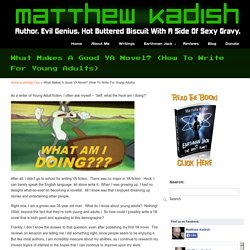 After all, I didn’t go to school for writing YA fiction. There was no major in YA fiction. Heck, I can barely speak the English language, let alone write it. When I was growing up, I had no designs what-so-ever on becoming a novelist. Writing Fiction for Young Adults. There’s no question about it: The young adult (YA) audience is a hot market, one that is steadily growing in popularity and garnering attention from young readers as well as literary critics. 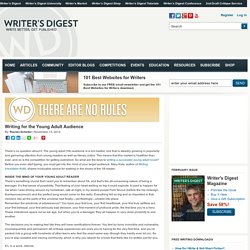 This means that this market is healthier than ever–and so is the competition for getting published. So what are the keys to writing a successful young adult novel? Before you even start typing, you must get into the mind of your target audience. Mary Kole, author of Writing Irresistible Kidlit, shares invaluable advice for walking in the shoes of the YA reader. INSIDE THE MIND OF YOUR YOUNG ADULT READER There’s something crucial that I want you to remember about YA, and that’s the all-consuming nature of being a teenager. The decisions you’re making feel like they will have ramifications forever. Read On...An Excerpt from Six Tips for Writing Young Adult Novels by Nora Raleigh Baskin at Gotham Writers' Workshops and WritingClasses.com. By Nora Raleigh Baskin I didn’t start out writing for children. 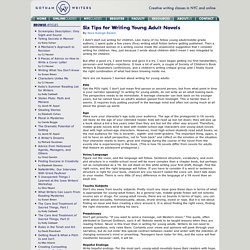 Like many of my fellow young adult/middle-grade authors, I spent quite a few years (five) writing adult fiction before getting published. Then a well-intentioned woman in a writing course made the unwelcome suggestion that I consider writing for children. How to Write YA. Seth Fishman's new YA novel, The Well's End, picks up with a mysterious sickness sweeping through 17-year-old Mia Kish's school--and she might be the cause of it. 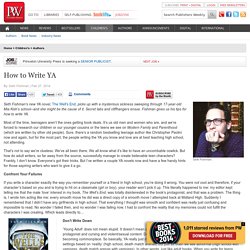 Secret labs and cliffhangers ensue. Fishman gives us his tips for how to write YA. Most of the time, teenagers aren’t the ones getting book deals. It’s us old men and women who are, and we’re forced to research our children or our younger cousins or the teens we see on Modern Family and Parenthood (which are written by other old people). Sure, there’s a random bestselling teenage author like Christopher Paolini now and again, but for the most part, the people writing the YA you know and love are at best teaching high school, not attending. That’s not to say we’re clueless. Confront Your Failures If you write a character exactly the way you remember yourself or a friend in high school, you’re doing it wrong. Don't Write Down ‘Young Adult’ does not mean stupid. Be Timeless When Timeless Is Called For Be Confident. The 8 Habits of Highly Successful Young-Adult Fiction Authors - Nolan Feeney. Young-adult fiction, commonly called "YA fiction," has exploded over the past decade or so: The number of YA titles published grew more than 120 percent between 2002 and 2012, and other estimates say that between 1997 and 2009, that figure was closer to 900 percent. 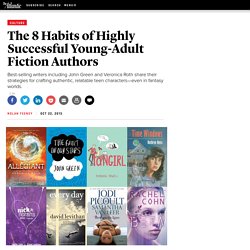 Ask a handful of young-adult fiction writers what exactly makes a YA novel, though, and you’ll get a handful of conflicting answers. At their core, YA books are for and about teenagers and pre-teens, usually between 12 and 18 years old, but sometimes as young as 10. Yet more than half of all YA novels sold are bought by older adults 18 or older, and certain titles published in the U.S. as YA are considered mainstream fiction for adults in other countries. Some authors believe the intent to write for young readers is a prerequisite of YA fiction; others don’t even realize their books will be labeled as YA until after they finish writing.