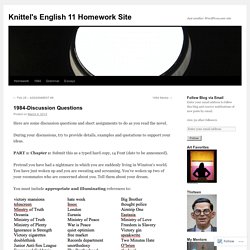 During your discussions, try to provide details, examples and quotations to support your ideas. PART 1: Chapter 1: Submit this as a typed hard copy, 14 Font (date to be announced). 07.05.08. 1984 wholenovel. 35 Communist Propaganda Posters Illustrate The Art And Ideology Of Another Time. Sovfoto via Getty Images 1920’s poster. 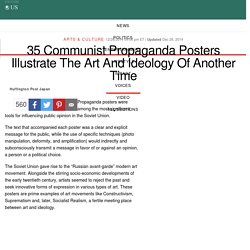 “All power to the Soviets. Peace to the People. Land to the peasants.” Sovfoto via Getty Images Constructivist poster from Gustav Klutsis (1930). Examples of Communism. Communism is a system of government where all the property is public and the government owns and controls the manufacturing and transportation industries. 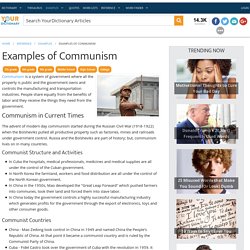 People share equally from the benefits of labor and they receive the things they need from the government. Communism in Current Times The advent of modern day communism started during the Russian Civil War (1918-1922) when the Bolsheviks pulled all productive property such as factories, mines and railroads under government control. Russia and the Bolsheviks are part of history; but, communism lives on in many countries. Communist Structure and Activities. Types of Government - Anarchy. 5 19th-Century Utopian Communities in the United States - History Lists.

The philosophical movement known as Transcendentalist was in full swing when Unitarian minister George Ripley founded Brook Farm in the rural Boston suburb of West Roxbury in 1841. 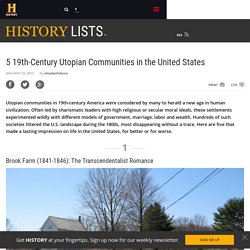 The community wasn’t particularly unique for its time—after all, more than 80 utopian communities were launched in the 1840s alone—but it was notable as the first purely secular one. Members farmed the land together and held the fruits of their labor in common. The idea was that this would give settlers more time to pursue their own literary and scientific interests, which would then benefit the rest of humankind. Money troubles and internal squabbling eventually eroded the community, which disbanded after only a few years in existence. Founding member Nathaniel Hawthorne ended up having a pretty miserable time there, which he would later document in his fictionalized account of Brook Farm, “Blithedale Romance.”

Dystopian Elements and Basic Characteristics. The dystopian stories are often stories about survival, their primary theme is oppression and rebellion. 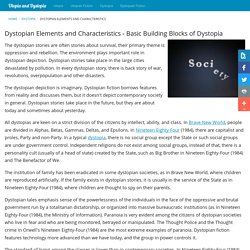 The environment plays important role in dystopian depiction. Dystopian stories take place in the large cities devastated by pollution. In every dystopian story, there is back story of war, revolutions, overpopulation and other disasters. The dystopian depiction is imaginary. DefinitionCharacteristics. 5 Dystopian Societies That Might Actually Function - The B&N Sci-Fi and Fantasy Blog. Dystopia is—ironically for something pretty terrible—disturbingly popular these days. 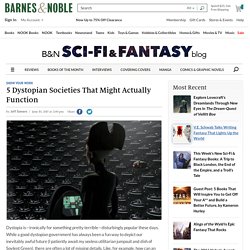 While a good dystopian government has always been a fun way to depict our inevitably awful future (I patiently await my sexless utilitarian jumpsuit and dish of Soylent Green), there are often a lot of missing details. Like, for example, how can an incredibly ridiculous (but evil) government can survive for more than five minutes without a functioning economy or large-scale military force? At least in her classic “bad future” novel The Handmaid’s Tale, Margaret Atwood heavily implies that the Republic of Gilead is both relatively new, and more or less unstable and doomed to failure. Many writers just beg for your suspension of disbelief.

Not everyone goes the lazy route when imagining how a tyrannical government might actually make it work. Virtual Quest Outline.