SS.5.C.2.1. PatriotLoyalistorNeutral_YouDecide. Loyalists. Loyalists, in the American Revolution, colonials who adhered to the British cause. 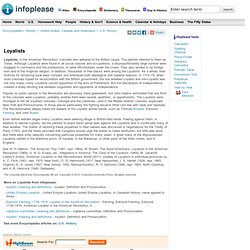 The patriots referred to them as Tories. Although Loyalists were found in all social classes and occupations, a disproportionately large number were engaged in commerce and the professions, or were officeholders under the crown. They also tended to be foreign born and of the Anglican religion. In addition, thousands of free blacks were among the Loyalists. As a whole, their motives for remaining loyal were complex and embraced both ideological and material reasons. Figures on public opinion in the Revolution are obviously mere guesswork, but John Adams estimated that one third of the colonials were Loyalists; probably another third were neutral, apathetic, or opportunistic. Even before warfare began many Loyalists were seeking refuge in British-held lands.

See W. The Columbia Electronic Encyclopedia, 6th ed. More on Loyalists from Infoplease: See more Encyclopedia articles on: U.S. The Olive Branch Petition. Approved by the Continental Congress on July 5, 1775 To the King's Most Excellent Majesty. 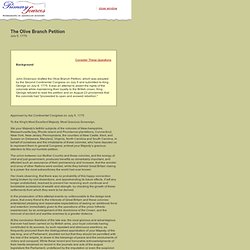 Most Gracious Sovereign, We your Majesty's faithful subjects of the colonies of New-hampshire, Massachusetts-bay, Rhode island and Providence plantations, Connecticut, New-York, New-Jersey, Pennsylvania, the counties of New Castle, Kent, and Sussex on Delaware, Maryland, Virginia, North Carolina and South Carolina, in behalf of ourselves and the inhabitants of these colonies, who have deputed us to represent them in general Congress, entreat your Majesty’s gracious attention to this our humble petition.

The union between our Mother Country and these colonies, and the energy of mild and just government, produced benefits so remarkably important, and afforded such an assurance of their permanency and increase, that the wonder and envy of other Nations were excited, while they beheld Great Britain riseing to a power the most extraordinary the world had ever known. Www.learner.org/courses/amerhistory/pdf/WomenRev_LOne.pdf. Women of the Revolutionary War. Women in The American Revolution. Loyalists, Fence-sitters, and Patriots. After patriots tore down the statue of King George III in New York City on July 9, 1776, they melted parts of it down and made bullets to use against the British. 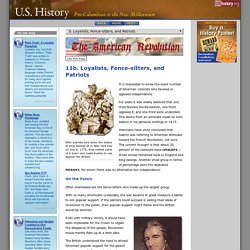 It is impossible to know the exact number of American colonists who favored or opposed independence. For years it was widely believed that one third favored the Revolution, one third opposed it, and one third were undecided. This stems from an estimate made by John Adams in his personal writings in 1815. Historians have since concluded that Adams was referring to American attitudes toward the French Revolution, not ours. The current thought is that about 20 percent of the colonists were Loyalists — those whose remained loyal to England and King George. On the Fence Often overlooked are the fence-sitters who made up the largest group. With so many Americans undecided, the war became in great measure a battle to win popular support. The British understood the need to attract American popular support for the parent country, as well.

Loyalists Vs. Patriots. American Revolutionary War Project. You will write a journal entry based on a fictional historical character that you have created. 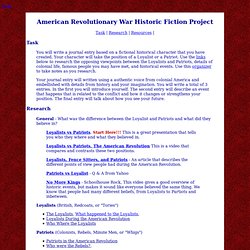 Your character will take the position of a Loyalist or a Patriot. Use the links below to research the opposing viewpoints between the Loyalists and Patriots, details of colonial life, famous people you may have met, and historical events. Use this organizer to take notes as you research. Your journal entry will written using a authentic voice from colonial America and embellished with details from history and your imagination.

You will write a total of 3 entries. General - What was the difference between the Loyalist and Patriots and what did they believe in? Loyalists vs Patriots. Loyalists (British, Redcoats, or "Tories") Patriots (Colonists, Rebels, Minute Men, or "Whigs") Revolutionary War Sites American Revolutionary Biography Websites Encyclopedias and Databases - These are great places to look for biographical information Timelines Resources.