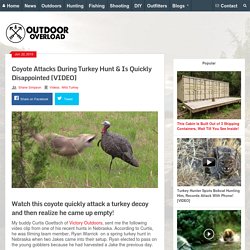 According to Curtis, he was filming team member, Ryan Warrick on a spring turkey hunt in Nebraska when two Jakes came into their setup. Ryan elected to pass on the young gobblers because he had harvested a Jake the previous day. Curtis and Ryan were kicked back watching the show when several minutes later, the Jakes started to putt. The two hunters were unable to see what had the birds spooked because of cover to their left and they were hoping it was a couple of bullying Toms approaching. As the Jakes exited quickly to the right, a coyote burst onto the scene, hammering their Avian X Jake decoy.

I Take My Wolfdog On Epic Adventures Because I Hate To See Dogs Locked Away. I’m often surprised by how much joy animals can bring into our lives. 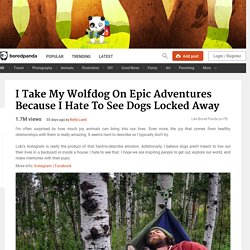 Even more, the joy that comes from healthy relationships with them is really amazing. It seems hard to describe so I typically don’t try. Family of bears play in backyard pool, make little girl cry - Trending. A family of bears, including five cubs and their mother, borrowed a New Jersey family's backyard pool to cool off from the hot weather. 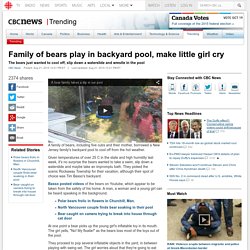 Given temperatures of over 25 C in the state and high humidity last week, it's no surprise the bears wanted to take a swim, slip down a waterslide and maybe take an impromptu bath. They picked the scenic Rockaway Township for their vacation, although their spot of choice was Tim Basso's backyard. Basso posted videos of the bears on Youtube, which appear to be taken from the safety of his home. A man, a woman and a young girl can be heard speaking in the background. At one point a bear picks up the young girl's inflatable toy in its mouth. They proceed to pop several inflatable objects in the yard, in between playing with swing set. 14 historias que demuestran que los animales definitivamente tienen alma. FEEDBAC - Animals rescuing other animals! Photographer Documents the Beautifully Uncommon Friendship Between a Wolf and a Bear. Finnish Photographer Lassi Rautiainen expertly captures the beautiful relationship that's shared between a gray wolf and a brown bear. 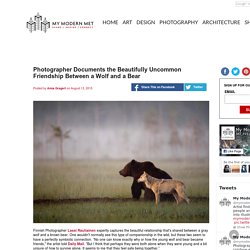 One wouldn't normally see this type of companionship in the wild, but these two seem to have a perfectly symbiotic connection. “No one can know exactly why or how the young wolf and bear became friends," the artist told Daily Mail. "But I think that perhaps they were both alone when they were young and a bit unsure of how to survive alone. It seems to me that they feel safe being together.” For ten days straight, the affectionate duo was seen spending time together from 8 PM to 4 AM. Cuando estos curiosos animales vieron a un intruso en medio de su campo, sucedió algo increíble. Si no fuera por estas vacas, probablemente este pequeño no estaría vivo. 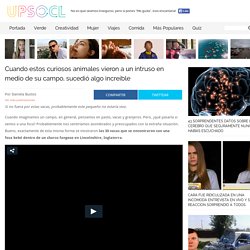 Cuando imaginamos un campo, en general, pensamos en pasto, vacas y granjeros. Kitten And Owlet Become Best Friends And Nap Buddies. Fuku the owlet and Marimo the kitten are an adorable pair of best friends that love to hang out, play together and nap at their home in Hukulou coffee shop in Osaka, Japan. 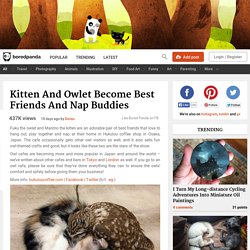 The cafe occasionally gets other owl visitors as well, and it also sells fun owl-themed crafts and good, but it looks like these two are the stars of the show. Owl cafes are becoming more and more popular in Japan and around the world – we’ve written about other cafes and bars in Tokyo and London as well. If you go to an owl cafe, please be sure that they’ve done everything they can to ensure the owls’ comfort and safety before giving them your business! Chimps Are Capable Of Cooking Food. It might seem obvious why chimps don’t have tea parties; they’d make a massive mess for a start, but the ability to cook food requires surprisingly advanced mental skills. 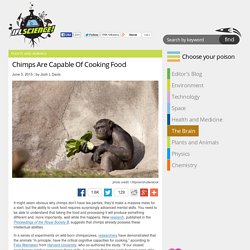 You need to be able to understand that taking the food and processing it will produce something different and, more importantly, wait while this happens. New research, published in the Proceedings of the Royal Society B, suggests that chimps already possess these intellectual abilities. In a series of experiments on wild-born chimpanzees, researchers have demonstrated that the animals “in principle, have the critical cognitive capacities for cooking,” according to Felix Warneken from Harvard University, who co-authored the study. These Animals Saw Their Reflections For The First Time And Their Reactions Were Surprisingly Hilarious. No creerás la razón por la que estos lobos se acercan a una chica a través de la nieve. Talenthouse - Photos de la publication de Talenthouse. La-historia-tras-el-acierto-fotografico-del-pajaro-carpintero-transportando-a-una-comadreja-bebe. Videoclub – Tortuga y gato juegan al pillapilla.

Homeless Cat Sneaks Into Zoo And Becomes Friends With A Lynx. A homeless cat snuck into the St. 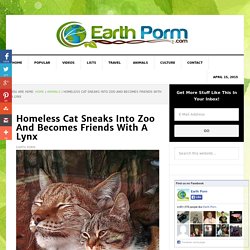 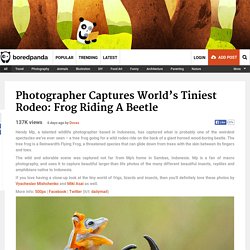 The tree frog is a Reinwardt’s Flying Frog, a threatened species that can glide down from trees with the skin between its fingers and toes. The wild and adorable scene was captured not far from Mp’s home in Sambas, Indonesia. Mp is a fan of macro photography, and uses it to capture beautiful larger-than life photos of the many different beautiful insects, reptiles and amphibians native to Indonesia. If you love having a close-up look at the tiny world of frigs, lizards and insects, then you’ll definitely love these photos by Vyacheslav Mishchenko and Miki Asai as well. Video: La heróica gata que salvó a un bebé abandonado - RT. 23 fotos de padres e hijos del mundo animal capaces de derretirte el corazón. ¡Impresionante! Tras escapar de la muerte esta gata decidió ayudar a los enfermos. 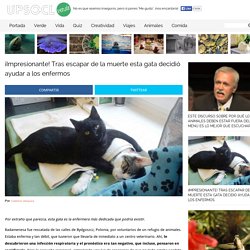 Are Orangutans Nature’s Best Mothers? Posted By M.M. Sullivan The Rainforest Site Sumatran orangutan mothers form a strong bond with their young, often caring for and teaching them for the first six years of their lives — without any help from their male counterparts. For the first few months of their lives, baby orangutans are cradled nonstop by their mothers, and are completely dependent on their mothers for the first two years. Click on the video below to see a baby orangutan and its loving mother as they enjoy some together time in the forests of Sumatra.

Toro se tranquiliza al reconocer al hombre que le daba de comer. Videoclub - Garza se traga una rata viva. Sheepdog 'bodyguards' protect endangered penguins from foxes, saving them from extinction. "No foxes have killed penguins in the past seven years" This is clever. Very clever. Sheepdogs are bred and trained to protect sheep against wolves, but that doesn't mean that their skills can't be used to protect different animals against other species of predators.

This is exactly what the Maremma Project did on Warrnambool’s Middle Island, off the south coast of Australia. They took 2 Maremma sheepdogs, a breed originally from central Italy, and brought them to the island to protect a dwindling and seriously endangered population of Little Penguins from foxes. Fish-eating spiders are real, and they cover most of the planet.

Scientists have discovered spiders that eat fish twice their size exist on every continent except Antarctica. Image: Clockwise from left - Alfredo Dosantos Santillan; Ed Germain; Loren Jarvis After reviewing more than 80 reports of fish predation, researchers from Australia and Switzerland have found that fish-eating is far more widespread in spiders than previously imagined. Of course, spiders are already known to eat reptiles, mice and even birds and bats. But prior to this, tales of spiders hunting fish in the wild had been anecdotal and isolated to a few different locations. But after studying all the available literature on the topic, alongside unpublished information from biologists and naturalists, the researchers found the phenomenon occurs pretty much all around the world, and in spider species belonging to eight different taxonomic families.

This Chipmunk Fighting Off A Cat Is The Cutest Thing You'll See Today. 30 Photos Proving Australia is the Most Insane Place. Life Random NEXT 30 Photos Proving Australia is the Most Insane Place by rozin.abbas from 1,000,000 Pictures 5.2k Share on Facebook Share on Twitter Page 1 of 6. Striking Photographs Of Animals Eating Their Prey. Hungry Snake Picked The Wrong Dinner. Researchers on Golem Grad Island, Macedonia, stumbled upon a rather intriguing and wholly disgusting find whilst looking for snakes - a dead young viper with the head of a huge centipede protruding through its body. What a way to go! The report has been briefly described in the journal Ecologica Montenegrina.

Nose-horned vipers (Vipera ammodytes) are venomous snakes found in southern Europe, the Balkans and certain parts of the Middle East. They can grow up to 95 centimeters and possess a characteristic “horn” on the snout, hence the name. They’re also considered to be the most dangerous European viper because their venom is highly toxic, but they’re a pretty docile species that tend to only bite when provoked. Adult nose-horned vipers usually feed on lizards, smaller snakes and rabbits on Golem Grad, whilst the juveniles eat lizards and a particular species of centipede, the Megarian banded centipede (Scolopendra cingulata). ¡Increíble! Oso pardo salvó a un cuervo de morir ahogado.

“It like flopped right out,” as Conger put it. Self-love in the animal kingdom. Despite what you might have been told, masturbation won't make you go blind or grow hair on your palms. It’s actually a pretty standard event in the animal kingdom - mammals, birds, and amphibians have been observed engaging in some self-pleasure. YouTube has a ton of examples if you need to see it to believe it (strongly NSFW). Not every animal masturbates to climax, meaning it might not solely be done for pleasure. With primates ejaculation can flush out sperm that may have lost its motility, allowing for fresh sperm to lead the way and have a better chance of conception.