Online Grey Noise Generator. Burningman/How_To_Tie_Your_Camp_Up.pdf. The Mitchelli - The modern gentleman. Lucy Bellwood’s Bondage. A Rope Ladder. There are several types of rope ladders that can be made. 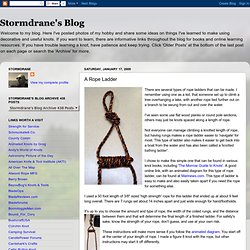 I remember using one as a kid, that someone set up to climb a tree overhanging a lake, with another rope tied further out on a branch to be swung from out and over the water. I've seen some use flat wood planks or round pole sections, others may just be knots spaced along a length of rope. Not everyone can manage climbing a knotted length of rope, but having rungs makes a rope ladder easier to 'navigate' for most. 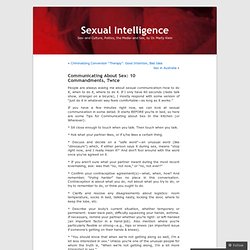 If I only have 60 seconds (radio talk show, stranger on a bicycle), I mostly respond with some version of “just do it in whatever way feels comfortable—as long as it works.” If you have a few minutes right now, we can look at sexual communication in some detail. It starts BEFORE you’re in bed, so here are some Tips for Communicating about Sex In the Kitchen (or Wherever): * Sit close enough to touch when you talk.

Then touch when you talk. * Ask what your partner likes, or if s/he likes a certain thing. * Discuss and decide on a “safe word”—an unusual word (like “dinosaurs”) which, if either person says it during sex, means “stop right now, and I really mean it!” * If you aren’t sure what your partner meant during the most recent lovemaking, ask: was that “no, not now,” or “no, not ever?” Pathological Lying, Accusation, and Swindling – A Study in Forensic Psychology by William Healy, Mary Healy. Dawnamatrix.com. Breath control: Safety - Wipipedia. Breath control is the process of limiting or restricting air and/or the supply of oxygen to the brain. 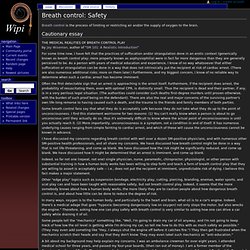 Cautionary essay THE MEDICAL REALITIES OF BREATH CONTROL PLAY by Jay Wiseman, author of "SM 101: A Realistic Introduction" For some time now, I have felt that the practices of suffocation and/or strangulation done in an erotic context (generically known as breath control play; more properly known as asphyxiophilia) were in fact far more dangerous than they are generally perceived to be. As a person with years of medical education and experience, I know of no way whatsoever that either suffocation or strangulation can be done in a way that does not intrinsically put the recipient at risk of cardiac arrest.

(There are also numerous additional risks; more on them later.) Often the first detectable sign that an arrest is approaching is the arrest itself. In many ways, oxygen is to the human body, and particularly to the heart and brain, what oil is to a car's engine. 椋陽児 炉利なイラスト展 その1. Peter gentenaar - upon a fold. The blog turned two this week and I’m quietly celebrating with this papery post. 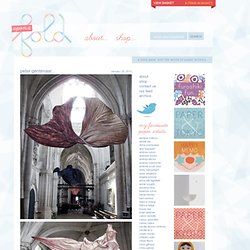 I’ve been admiring these works by Peter Gentenaar for hours now. More than 100 of Peter Gentenaar’s ethereal paper sculptures were hung inside the Abbey church of Saint-Riquier in France. Peter’s sculptures are created by allowing pulp to dry and shrink in unison whilst attached to bamboo framework. He says, The tension between the two materials transforms itself into a form reminiscent of a slowly curling autumn leaf. Just. P.S. Tweet this. Ashé Journal: Burroughs-ian Gnosticism, Sven Davisson. Ashé Journal, Vol 4, Issue 3, 469-483, Fall 2005. 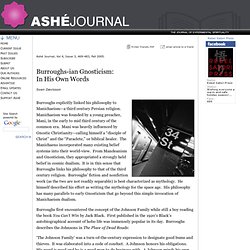 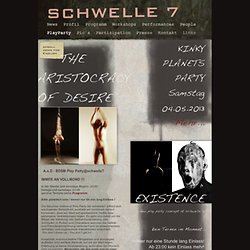 Welcome to shevette! Original! Bizzybiz Blog: 50 Screams of Hate. Articles » Guiltied Blog! On this page you can find my articles on bondage and other kink-related topics. 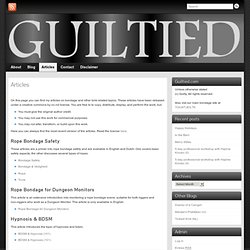 These articles have been released under a creative commons by-nc-nd license. You are free to to copy, distribute, display, and perform the work, but: You must give the original author credit.You may not use this work for commercial purposes.You may not alter, transform, or build upon this work. Here you can always find the most recent version of the articles.

__ DOMINIQUE APPIA __ A Year Without Clothes. Collar and Cuffs. News. The Unnamed Feeling.