Former PNG prime ministers among new opposition coalition set to challenge for election. Updated A roll-call of Papua New Guinea's former leaders has come together to form an opposition coalition, just weeks before the country goes to the polls for the national election. 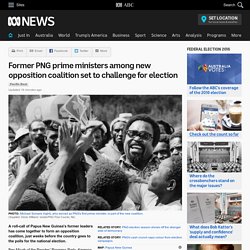 Offenders use nail gun to shoot staff, patrons during robbery in Canberra. By Sophie Kesteven Updated A man has been taken to hospital after being shot in the leg with a nail gun during an aggravated robbery at a Canberra club. 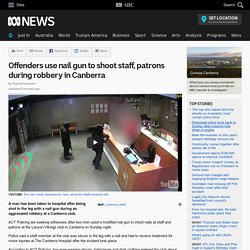 ACT Policing are seeking witnesses after two men used a modified nail gun to shoot nails at staff and patrons at the Lanyon Vikings club in Canberra on Sunday night. Police said a staff member at the club was struck in the leg with a nail and had to receive treatment for minor injuries at The Canberra Hospital after the incident took place. According to ACT Policing, two men wearing gloves, balaclavas and dark clothing entered the club about 11:10pm armed with a knife and a modified nail gun. The men made demands for cash, which the staff complied with. However, upon leaving the club, the man armed with the nail gun shot at patrons and staff. Moonlight State: The honest cop who helped blow the whistle on Australia's most corrupt police force.

Updated It was an unusual assignment, and Australian Federal Police officer Dave Moore wasn't happy about it. 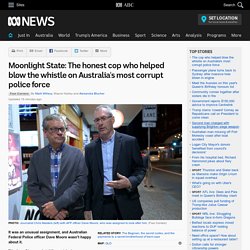 "I had a call to go and visit the assistant commissioner," he recounted. UK election: Who could replace Theresa May as Britain's prime minister? Updated Theresa May's days may be numbered. 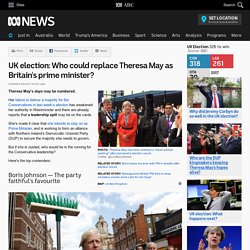 Her failure to deliver a majority for the Conservatives in last week's election has weakened her authority in Westminster and there are already reports that a leadership spill may be on the cards. She's made it clear that she intends to stay on as Prime Minister, and is working to form an alliance with Northern Ireland's Democratic Unionist Party (DUP) to secure the majority she needs to govern. But if she is ousted, who would be in the running for the Conservative leadership? 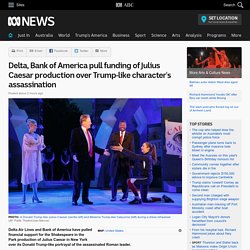 The contemporary staging of William Shakespeare's tragedy, which is being staged by the non-profit Public Theatre, portrays Caesar as a powerful, blond-haired man wearing a business suit with an American flag pin. His wife, Calpurnia, has a Slavic accent and dresses in designer fashions. Delta said in a statement that it was ending its four-year run as official airline of the Public Theatre. Thousands of LGBT rights supporters march across US, protesting against Donald Trump administration - Donald Trump's America. Posted Thousands of LGBT rights supporters have rallied in cities across the United States, in one of the biggest protests since President Donald Trump took office. 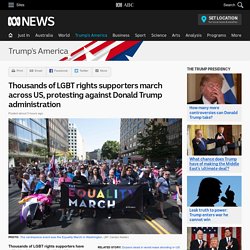 The centrepiece event, the Equality March in Washington, was endorsed by virtually every major national advocacy group working on behalf of lesbian, gay, bisexual and transgender Americans. Activists have been embittered by the Trump administration's rollback of federal guidance advising school districts to let transgender students use the bathrooms and locker rooms of their choice. They also complain that Mr Trump, who campaigned as a potential ally of gays and lesbians, has stocked his administration with foes of LGBT rights, including Vice-President Mike Pence, Attorney-General Jeff Sessions, and Health and Human Services Secretary Tom Price. Throngs of marchers, many thousands strong, paraded past the White House and toward the Capitol, trailing behind a giant rainbow flag near the head of the procession. What the heck is going on with Uber CEO Travis Kalanick?

Updated It hasn't been a great year for ride-booking app Uber. 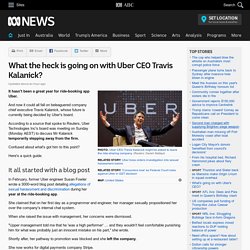 And now it could all fall on beleaguered company chief executive Travis Kalanick, whose future is currently being decided by Uber's board. According to a source that spoke to Reuters, Uber Technologies Inc's board was meeting on Sunday (Monday AEST) to discuss Mr Kalanick temporarily stepping away from the firm. Confused about what's got him to this point? Here's a quick guide. It all started with a blog post In February, former Uber engineer Susan Fowler wrote a 3000-word blog post detailing allegations of sexual harassment and discrimination during her year at the ride-booking app. UK hung parliament puts Northern Ireland unionists in the global spotlight - UK Election 2017. Posted In Belfast's biggest market, everyone's got an opinion on the United Kingdom's hung parliament. 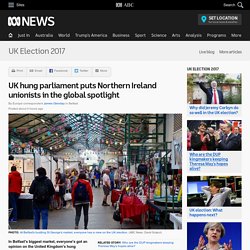 "It's a disaster," said Les Sharpe, a local artist and one of the stallholders. Logan City Mayor Luke Smith's donors benefited from council's decisions, councillors claim. Updated The mayor of one of Australia's biggest councils has been accused of misusing his position by voting for planning changes that favoured developers who donated money to his political campaign. 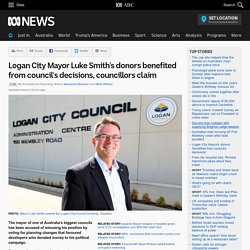 Key points: Logan City Mayor Luke Smith voted on planning changes that benefited donors to his $377,000 campaign funCalls for state Local Government laws to be changedMayor Smith to give evidence at Crime and Corruption Commission tomorrow Two councillors at Logan City, in south east Queensland, believe Mayor Luke Smith acted "immorally" and "with a conflict of interest", and are calling for changes to the state's local government laws. Councillor Smith received $377,000 from developers and other businesses that was channelled into a campaign fundraising company called Logan Futures. Man refused bail for alleged attempted kidnapping and bar stool assault. Posted Bail has been formally refused in the case of a Sydney man who allegedly tried to kidnap a woman a week ago and is also charged with assaulting several men in a pub in a separate case yesterday. 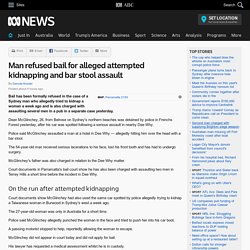 Dean McGlinchey, 26, from Belrose on Sydney's northern beaches was detained by police in Frenchs Forest yesterday, after his car was spotted following a serious assault in nearby Dee Why. Police said McGlinchey assaulted a man at a hotel in Dee Why — allegedly hitting him over the head with a bar stool. The 54-year-old man received serious lacerations to his face, lost his front tooth and has had to undergo surgery. Peter Dutton calls for stronger powers to block citizenship applications. Updated Immigration Minister Peter Dutton wants greater power to block citizenship applications. Legislation to tighten citizenship requirements is due to be introduced this week, which requires greater English language skills and demonstration of a commitment to Australian values for prospective citizens.

Mr Dutton already has the power to overrule some decisions of the Administrative Appeals Tribunal (AAT), but wants to extend that. "It's an anomaly where a minister can cancel a visa, have that decision overturned by the AAT, and then substitute a decision in place of the AAT decision," Mr Dutton said. "But you can't do that in relation to the granting of citizenship. Mr Dutton has criticised the decisions of the AAT recently, including its ruling to overturn an Immigration Department decision to cancel the visas of six Iranians. Centrelink: Government rejects $150,000 advice to make customers' goals more realistic. Posted One of the Federal Government's most criticised departments was told to abandon its performance targets as there was no realistic chance they would be met.

Key points: Centrelink has been heavily criticised for debt recovery programApproval levels have been slipping since 2012Poor results prompt PwC to pay for review into success and performance But the advice, commissioned from accountancy firm PricewaterhouseCoopers (PwC) at a cost of $150,000 was rejected by the giant Department of Human Services (DHS), which has not come close to meeting its 85 per cent customer satisfaction goal for Centrelink in years. That may not be a surprise given more than 42 million calls to Centrelink received an engaged signal during the first 10 months of this financial year. The agency has been heavily criticised for its debt-recovery program this year, but approval levels have been slipping ever since a peak at 71 per cent in 2012-2013. Centrelink satisfaction low. Donald Trump accuses Comey of 'cowardly' leaks as Republicans call for President to come clean - Donald Trump's America. Updated Donald Trump has accused former FBI director James Comey of "very cowardly" leaks, as Republican congressmen called on the US President to "clear up the matter once and for all".

Key points: Republicans call on Mr Trump to confirm whether he has tapes of any conversationsMr Trump said he would "soon" but may face a subpoena if he does not but Attorney-General Jeff Sessions is due to appear at a senate hearing on Tuesday. French elections: President Emmanuel Macron's party set for huge parliamentary majority. Updated. Finkel review: Labor to question chief scientist over carbon emissions recommendations. Posted Australia's chief scientist is set to face a grilling from Labor in Canberra this week over his recommendation for a clean energy target. The Opposition wants to know why Dr Alan Finkel's report, released last week, shows net carbon emissions to zero in 2070 instead of 2050.

"That choice to me seems quite curious," Shadow Assistant Climate Change Minister Pat Conroy told AM. "I would argue, and I think the bulk of industry and the scientific community would argue, 2050 is not an aggressive trajectory — it's scientifically and economically responsible trajectory. " On Thursday Dr Finkel will front a cross-party inquiry that for the last few months has been looking into the future of energy. Mr Conroy is the inquiry's deputy chair and said he will be focussing on why Dr Finkel has outlined a more conservative pace to lower emissions than other countries around the world have chosen. Topics: government-and-politics, federal-government, climate-change, energy, alp, australia. Love and other drugs: Family's extraordinary journey to help Sam Goddard recover from strokes. Updated A series of catastrophic strokes at 23 left Sam Goddard unable to talk, walk or see. Moonlight State: The Bagman, the secret codes, and the payments to bent cops in web of corruption.

This week in finance: Tech stocks get the wobbles, the Fed to lift rates and can jobs keep beating expectations? Posted. Gallery accuses Indigenous corporation of silencing artists in mine dispute. US Attorney-General Jeff Sessions to appear before Senate committee in Russia probe - Donald Trump's America. Bali statue of Hindu god Wisnu to be world's largest. Rallies against sharia law held across US, critics accuse protesters of vilifying Muslims. London Bridge attack: Met Police officer recalls 'surreal' moment terrorism struck. Endangered desert animals take refuge in man-made homes in outback science project. Cattle thrive on rehabilitated land as companies look for new uses for mined property. Are table manners a thing of the past … and should we care? - RN.