KiCad BOM Wizard Plugin with customisable output (Can make HTML and CSV BOM) - KiCad.info Forums. Hello everyone, I'm here to share my new KiCad BOM plugin which I think some of you will find useful.

So for the past few weeks I've been working on a JavaScript KiCad plugin that will generate BOM based on configurable template files. the Idea behind it is to make it easier for anyone to customise how the BOM is presented as well as allow the user to select the format. I also wanted to have to sort and group the component together so that it can be better presented. The plugin works by replacing any of the shortcodes that it find on the template files with the associated data and then it combines everything into one file that it writes to. The components are sorted and grouped by component type.

The components are also grouped a second time if the part values and fields data are the same. At the moment, the plugin comes with two default templates that you can use to generate a HTML and/or CSV BOM. but you can always make your our.Here the HTML version: New Stable KiCad - 10 Steps to Import an Old KiCad ProjectRheingold Heavy. With the release of the new officially stable version of KiCad, many improvements have been brought to us the faithful users, but some of those changes represent a hard break with the previous stable version, BZR_4022. 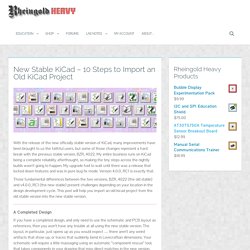 My entire business runs on KiCad being a complete reliability afterthought, so making the tiny steps across the nightly builds wasn’t going to happen. My upgrade had to wait until there was a release that locked down features and was in pure bug fix mode. Version 4.0.0_RC1 is exactly that. Those fundamental differences between the two versions, BZR_4022 (the old stable) and v4.0.0_RC1 (the new stable) present challenges depending on your location in the design development cycle. This post will help you import an old kicad project from the old stable version into the new stable version. A Completed Design If you have a completed design, and only need to use the schematic and PCB layout as references, then you won’t have any trouble at all using the new stable version. KiCad - CERN push & shove router - interactive preview. Best Kicad Library - Walter. All the material present in this page is covered by your choice of either Creative Commons license v3.0, Attribution-Share Alike or GPLv3 or later. 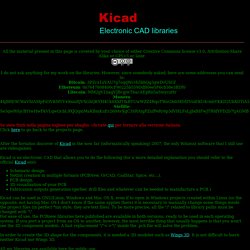 I do not ask anything for my work on the libraries. However, since somebody asked, here are some addresses you can send to: Bitcoin: 3PZcx1uVAU7g7oqqWcvh5bhQg3gwDvUSGf Ethereum: 0x7647808400cF90225b559DdB0ee5F6cb38e3BDf0 Litecoin: MM2gV1nagVJBcgjwT6acAEpRn5aSwycuHr Monero: 44jBRE9CWaVhtAMpFd3VKMYVx9maBJVXGbQKYH4Ck6XXfTtkBYUwWZZ4RquTWoGh6iMDfZVoiEKU4cmhYKKD2UbXDTiA5Fs Stellite: Se3qwf6SjcBYtwHwFkVLqwQcbL9XJQqmMaKBmKuEr269AvXqC3SRAigPZufPeRr6p3dVHLFsLjjbdHFwJTR8fYFD2b7tjAGMB Se siete finiti nella pagina inglese per sbaglio, cliccate qui per tornare alla versione italiana.

After the fortuitos discover of Kicad in the now far (informatically speaking) 2007, the only Winzozz software that I still use are videogames. In order to create the 3D shape for the components, it is needed a 3D modeler such as Wings 3D. A Walk Through The Gerber Tool GerbView (KiCad) Building KiCad in Ubuntu. KiCADTutorialCreatingGerberFiles - opendous - Creating GERBER-274-X files for PCB fabrication in KiCAD - Open Hardware designs and related works by Opendous Inc. This Tutorial uses the Micropendous1 project as an example. 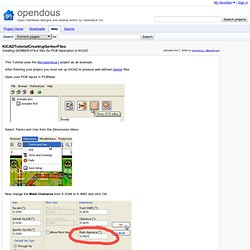 After finishing your project you must set up KiCAD to produce well-defined Gerber files. Open your PCB layout in PCBNew: Select Tracks and Vias from the Dimensions Menu Now change the Mask Clearance from 0.0100 to 0.0001 and click OK. Now create the Gerber files. Select all the layers you want to plot. Click Plot to create the selected layers in the same directory as your project files. Now click the Generate Drill File button to create the drill file. Your PCB fabricator may have specific requirements for these settings. Using GitHub Libraries with KiCad. 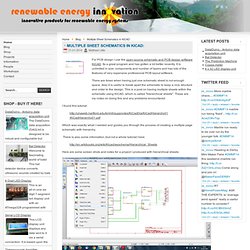 Its a great program and has gotten a lot better recently. It is unlimited in size, components and number of layers and has lots of the features of very expensive professional PCB layout software. There are times when having just one schematic sheet is not enough space. Also it is useful to break apart the schematic to keep a nice structure and order to the design. This is a post on having multiple sheets within the schematic using KiCAD, which is called "hierarchical sheets". I found this tutorial: Which was exactly what I needed and guides you through the process of creating a multiple page schematic with hierarchy.

There is also some information (but not a whole tutorial) here: Here are some screen shots and notes for a project I produced with hierarchical sheets: On your sheet you can place a Hierarchical Sheet from the Place menu - this will bring up a pop-up with the schematic name.