Navy Commander by Day, Secret Writer by Night! This is extremely long and probably only of interest to indie authors, but it does impact readers who shop Amazon, so I’m putting it here for anyone. 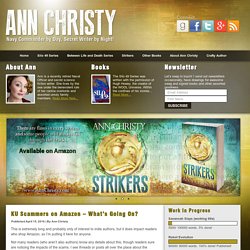 Not many readers (who aren’t also authors) know any details about this, though readers sure are noticing the impacts of the scams. I see threads or posts all over the place about the difficulty readers are having with simply browsing on Amazon to find their next good read. Discoverability is an author’s word when it comes to books…it’s the holy grail of the indie.

If you say it in the tones of a voice-over in a serious movie, you can almost hear the slight echo: What is the secret of the grail (discoverability)? Now, it is also a reader problem. For those who don’t know, to be in KU, a book can’t be available at any other vendor. On to the issue of the scammers and what’s really going on… KU pays authors based on a communal pot. So, it’s a pie. KU 2.0 (which is what we’re in now) pays by the page. Physicists Detect Gravitational Waves, Proving Einstein Right. A team of scientists announced on Thursday that they had heard and recorded the sound of two black holes colliding a billion light-years away, a fleeting chirp that fulfilled the last prediction of Einstein’s general theory of relativity. 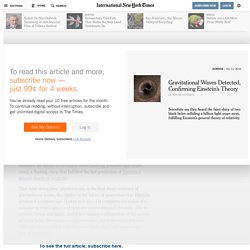 That faint rising tone, physicists say, is the first direct evidence of gravitational waves, the ripples in the fabric of space-time that Einstein predicted a century ago. (Listen to it here.) It completes his vision of a universe in which space and time are interwoven and dynamic, able to stretch, shrink and jiggle. And it is a ringing confirmation of the nature of black holes, the bottomless gravitational pits from which not even light can escape, which were the most foreboding (and unwelcome) part of his theory. To see the full article, subscribe here. Lists of unsolved problems. The Punctuation Guide. 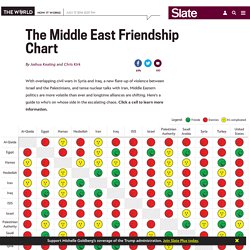 Egypt’s military government has made cracking down on extremist groups in the Sinai Peninsula a priority, and the al-Qaida-inspired group Ansar Beyt al-Maqdis has emerged as the country’s most formidable terror threat. The two groups have been linked in the past and have a shared hostility toward Israel, but their ultimate goals are quite different. Hamas authorities in Gaza have at times clashed with even more radical al-Qaida-linked groups there. While nominally on the same side in the Israeli-Palestinian conflict, the Shiite Lebanese militia and the Sunni international terror network have found themselves on opposite sides of Syria’s brutal civil war. Al-Qaida-linked groups have carried out attacks against Hezbollah targets in Lebanon.

Al-Qaida remains opposed to the U.S. Al-Qaida and its affiliates remain committed to the destruction of the Jewish state. Palestinian Authority: ENEMY Palestinian Authority: COMPLICATED. 25 of the Best Documentaries That Tell the Truth About How Our Government Really Works. By Tim Hjersted / filmsforaction.org How does government really operate behind the scenes? 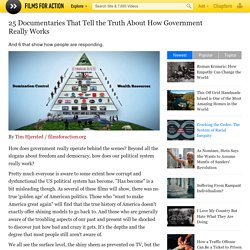 Beyond all the slogans about freedom and democracy, how does our political system really work? Pretty much everyone is aware to some extent how corrupt and dysfunctional the US political system has become. "Has become" is a bit misleading though. As several of these films will show, there was no true 'golden age' of American politics. We all see the surface level, the shiny sheen as prevented on TV, but the hard-hitting, behind-the-scenes investigative reports somehow never make it on the air, or curiously, into the classroom textbooks. As I reviewed Films For Action's library of films to make this list, it made me reflect on my own journey to discover this knowledge. It was pretty thrilling coming across these films for the first time.

Today, social change films have surged in popularity and accessibility. Now, beyond accessibility, filtering 'the best of the best' has become its own challenge.