Icsme2016. Java - Alternative to spinlock. Chapter 17. Threads and Locks. While most of the discussion in the preceding chapters is concerned only with the behavior of code as executed a single statement or expression at a time, that is, by a single thread, the Java Virtual Machine can support many threads of execution at once. 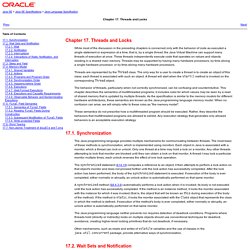 A thread will start when the start() method is invoked on the corresponding Thread object. The behavior of threads, particularly when not correctly synchronized, can be confusing and counterintuitive. Java Concurrency / Multithreading Tutorial. Back in the old days a computer had a single CPU, and was only capable of executing a single program at a time. 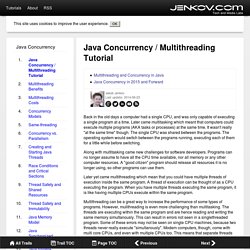 Later came multitasking which meant that computers could execute multiple programs (AKA tasks or processes) at the same time. It wasn't really "at the same time" though. The single CPU was shared between the programs. The operating system would switch between the programs running, executing each of them for a little while before switching. Along with multitasking came new challenges for software developers. Later yet came multithreading which mean that you could have multiple threads of execution inside the same program. Multithreading can be a great way to increase the performance of some types of programs. 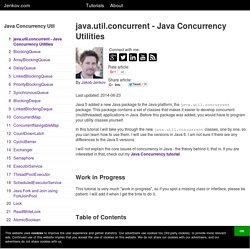 This package contains a set of classes that makes it easier to develop concurrent (multithreaded) applications in Java. Before this package was added, you would have to program your utility classes yourself. In this tutorial I will take you through the new java.util.concurrent classes, one by one, so you can learn how to use them. I will use the versions in Java 6. I will not explain the core issues of concurrency in Java - the theory behind it, that is. Work in Progress This tutorial is very much "work in progress", so if you spot a missing class or interface, please be patient. Table of Contents. Java Thread Local – How to use and code sample. Thread Local is an interesting and useful concept, yet most of the Java developers are not aware of how to use that. 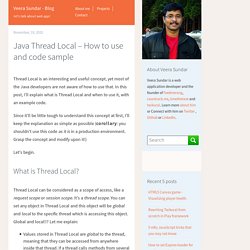 In this post, I'll explain what is Thread Local and when to use it, with an example code. Since it'll be little tough to understand this concept at first, I'll keep the explanation as simple as possible (corollary: you shouldn't use this code as it is in a production environment. Grasp the concept and modify upon it!) Let's begin. What is Thread Local? Thread Local can be considered as a scope of access, like a request scope or session scope. Values stored in Thread Local are global to the thread, meaning that they can be accessed from anywhere inside that thread. Well, that's the concept of Thread Local. Problems with RejectedExecutionHandler and Futures. I’ve been working with ThreadPoolExecutor and RejectedExecutionHandler. 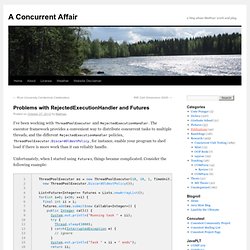 The executor framework provides a convenient way to distribute concurrent tasks to multiple threads, and the different RejectedExecutionHandler policies, ThreadPoolExecutor.DiscardOldestPolicy, for instance, enable your program to shed load if there is more work than it can reliably handle. Unfortunately, when I started using Futures, things became complicated.

Consider the following example: It creates a thread pool with a maximum of 10 threads, and a work queue that can hold another 10 items. The policy to shed load is ThreadPoolExecutor.DiscardOldestPolicy, which means it will favor newer tasks over older tasks, if the queue has reached its capacity. Then the program creates 30 tasks and submits them to the executor service. The only RejectedExecutionHandlers in the JDK that function correctly here are ThreadPoolExecutor.AbortPolicy and ThreadPoolExecutor.CallerRunsPolicy. Got something better? Bug ID: JDK-6625725 (coll) modCount should not be volatile. Java - HashMap and visibility.