Prepping a Session in 30 Minutes or Less : DnDBehindTheScreen. Two Experts Explain the Therapeutic Benefits of D&D - Take This. Tasha’s Cauldron of No Change. It’s been a year for D&D. 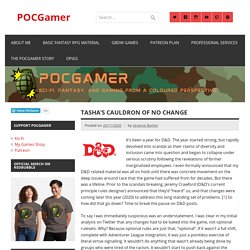 The year started strong, but rapidly devolved into scandal as their claims of diversity and inclusion came into question and began to collapse under serious scrutiny following the revelations of former marginalized employees. I even formally announced that my D&D related material was all on hold until there was concrete movement on the deep issues around race that the game had suffered from for decades. Why More Black Women Should Play Tabletop RPGs – Black Girl Nerds.

From Final Fantasy to Skyrim, Black women the world over have been enjoying role-playing games (or RPGs) for years. 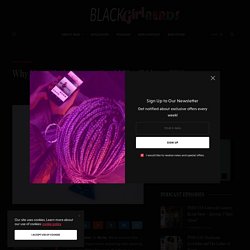 But there is a particular type of role-playing game that has seen slightly less participation from Black women: the tabletop role-playing game. While video game RPGs are certainly fun, tabletop games are also an involved social experience more Black women should have the opportunity to participate in. Why More Black Women Should Play Tabletop RPGs – Black Girl Nerds. Episode 16 – The World Is Just A Bridge. Gaming and Dungeons & Dragons – This Filipino American Life Podcast. On this episode of This Filipino American Life the TFAL crew talks about video games and Dungeons & Dragons (D&D). 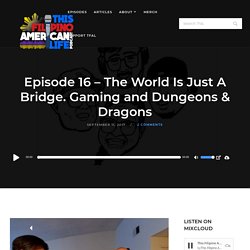 We talk about who used video games as an escape, who did not really play as much as a kid, and who thought video games reinforced Eurocentric mythology. Earl’s Character Stat Sheets Dungeon Master Edren While we start the conversation around video games, the conversation pivots to Dungeons and Dragons when we talk to our guests Earl Baylon (Elaine’s semi-cousin, Jonah Maiava from the Tomb Raider series, and Artistic Director of Room to Improv) and Edren Sumagaysay (writer, The Park’s Finest expediter, and Dungeon Master extraordinaire).

[5e][OC] By popular demand, re-upload of all 300+ Spell Cards for 5e (SRD only). Includes printable PDF, card backs, and templates so you can make your own! : DnD. Free Maps. All of these resources are provided free for personal use. 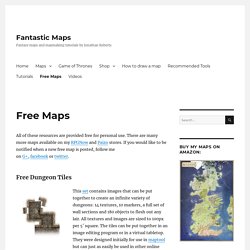 There are many more maps available on my RPGNow and Paizo stores. If you would like to be notified when a new free map is posted, follow me on G+, facebook or twitter. Free Dungeon Tiles This set contains images that can be put together to create an infinite variety of dungeons: 14 textures, 10 markers, a full set of wall sections and 180 objects to flesh out any lair. All textures and images are sized to 100px per 5′ square. Made with RandomGen by Orteil. Alright, let's make some stuff! 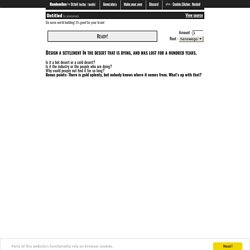 What's a random generator? A random generator is a simple application that produces random text at the click of a button. Femsplained. Absconding #01 - Absconder Publishing. The Tower Absconding beckons to all those lost, regardless of space and defiant to time. 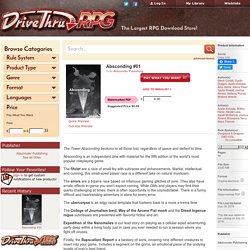 Absconding is an independent zine with material for the fifth edition of the world's most popular roleplaying game. D&D Blogs: Dungeons and Dragons blog articles from across the web. An [Actually Diverse] List of D&D Twitter Accounts to Follow. Today there was an article widely shared and criticized about the best ten D&D Twitter accounts to follow. 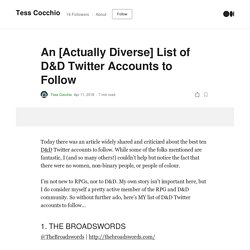 While some of the folks mentioned are fantastic, I (and so many others!) Couldn’t help but notice the fact that there were no women, non-binary people, or people of colour. Consent in Gaming - Monte Cook Games. From fending off an attack by bloodthirsty pirates to delving into dank caverns, roleplaying games allow you to explore and experience things you probably don’t want to face in real life—or to approach topics from the perspective of characters who may be very different than your actual self. 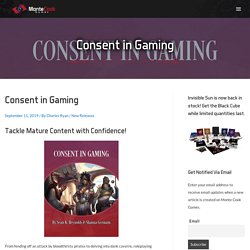 This shared experience is intended to be fun for all involved, but RPGs can put characters in life-or-death crises, intense emotional situations, or traumatic environments. Whether it’s body horror in a scary game, violence against children or animals in a fantasy world, flirty, romantic, or sexual relationships in any setting—or numerous other challenging scenarios—the line between fun and awkward, difficult, or downright unpleasant can be difficult to identify, and varies dramatically from player to player. Mature or controversial elements can and should be a part of many RPGs. But how do you know what topics to include or leave out of your games? Consent in Gaming By Sean K. D&D Has Excellent LGBT Representation. It’s no surprise that Dungeons & Dragon has gained a significant following among the LGBTQ+ community — and as such, there has been a drive to increase queer and trans-inclusive representation in the official canon. 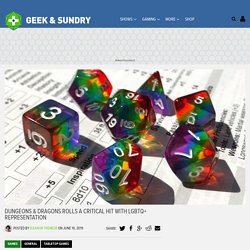 In 2017, Jeremy Crawford (D&D’s lead rules designer) told Kotaku that he intended to increase LGBTQ+ representation in the game, in an effort to show that “people like me exist.” He explained, “All of our new adventures contain LGBTQ+ characters. List of all D&D 5e Books - D&D Tomb. Here is the list of all D&D rulebooks, guidebooks and modules published for the 5th Edition of the Dungeons & Dragons role-playing game. 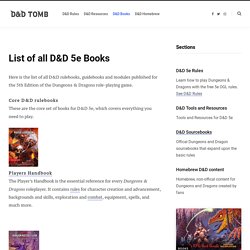 Core D&D rulebooksThese are the core set of books for D&D 5e, which covers everything you need to play. Players HandbookThe Player’s Handbook is the essential reference for every Dungeons & Dragons roleplayer. Dnd starter rulebook. D&D FAQs. D&D beginner’s guide: how to get started with Dungeons & Dragons. Whether you watched the Stranger Things kids fight a demogorgon, listened to Taako, Merle and Magnus hunt down relics on The Adventure Zone, or watched and listened to “a bunch of nerdy-ass voice actors sit around and play Dungeons and Dragons” on Critical Role, chances are you’ve consumed D&D in some form of media. The iconic fantasy role-playing game is having a moment.

Publisher Wizards of the Coast confirmed to Syfy Wire that 2017 was its biggest sales year in history, thanks in large part to streaming. When high profile nerds like Dan Harmon and Felicia Day bring their celebrity friends to the table and put it on the internet, their fans are introduced to the joys of fantasy roleplaying without ever picking up a 20-sided die. D&D Compendium - Newbie Guides. D&D, in two words, is Collaborative Storytelling. It's known as a Pencil & Paper Tabletop Role-Playing Game (TTRPG). The Dungeon Master (DM), sometimes called the Game Master (GM), is the person who conveys information about a world - environment, characters and dialogue, creature actions, and sensory details - to the rest of the players, who all control a character (Player Character, or PC) who exists in the world the Dungeon Master is describing.

The characters in the world the DM/GM creates are known as Non-Player Characters, or NPCs. The players and their characters have free will, plus a set of abilities their characters can do based on their chosen Class. A PC might be a magic-slinging Wizard, a brawny Fighter, a sneaky and crafty Rogue, a wise and supportive Cleric, or maybe a charming Bard, among many other choices. The game is usually played episodically, with multiple sessions of gameplay so that a complex story can unfold. A Beginners Resource Guide to D&D 5th Edition - For New Players and Dungeon Masters — Nerdolopedia. The Homebrew Cauldron Now this is going to be my only self promotional plug.

He was only 55 years old. A fascinating man who could have his own reality show today, our current Featured Bartender is Jerry Thomas. Jerry Thomas is considered one of the first bartenders and is arguably the most famous and influential founding father of the industry. One of his greatest contributions was writing the first bartender's guide in 1862, which is still consulted by bartenders around the world today. For more information on Jerry Thomas, check out this article by William Grimes in the New York Times. To learn how to make Jerry Thomas's famous Blue Blazer cocktail (he's demonstrating it in the drawing above) check out this recipe or video tutorial. Home - LIS 511 (2018 Fall): Dungeons & Dragons - LibGuides at LIU Palmer School of Library and Information Services. Welcome to the D&D LibGuide! This is designed to be used by current and prospective D&D players and DMs, as well as those interested in studying the game and the communities that have sprung up around it.

Guides: Customize a guide's tab & box styles - Help Center. One way to customize the appearance of your guide is by customizing the styles and colors of your navigation tabs/menu and content boxes. How D&D has helped me be more connected, creative and compassionate. The Uncanny Resurrection of Dungeons & Dragons. Freeman quit his job, and, shortly thereafter, in 2011, the first customers—initially, his daughter’s friends—arrived at his pop-up board-game club and café, Brooklyn Strategist, a place where children and their parents could sit down and play games, both classic and obscure, over veggie platters and homemade ginger ale. Looking back at his work in the research lab, he paired cognitive-ability tests with the board games that he had on hand, and divided these amusements by brain function—kids worked their way around their frontal lobes a die roll at a time.

Why the Cool Kids Are Playing Dungeons & Dragons. I started playing Dungeons & Dragons right around the time I completely gave up on Facebook. It was a little less than a year ago, as the first stories broke about the Cambridge Analytica scandal. I was sick of the social media idea of friendship, defined as likes or shares or “X knows the same 50 people you know.” OrcPub Alternatives and Similar Websites and Apps. AlternativeTo is a free service that helps you find better alternatives to the products you love and hate. The site is made by Ola and Markus in Sweden, with a lot of help from our friends and colleagues in Italy, Finland, USA, Colombia, Philippines, France and contributors from all over the world. That's right, all the lists of alternatives are crowd-sourced, and that's what makes the data powerful and relevant. Feel free to send us your questions and feedback on hello@alternativeto.net, in our discussion forums, in our Discord channel or tweet us at @AlternativeTo.

Librarians report: Dungeons and Dragons in the Library – Games in Libraries.