Creative Walking : Jonathan Pennington. This past week I had the joyous opportunity to teach a brand new course to our class of new PhD and ThM students at Southern. 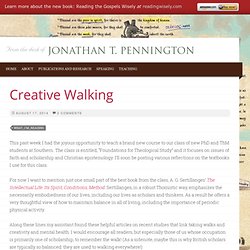 The class is entitled, “Foundations for Theological Study” and it focuses on issues of faith and scholarship and Christian epistemology. I’ll soon be posting various reflections on the textbooks I use for this class. For now I want to mention just one small part of the best book from the class, A. G. Sertillanges’ The Intellectual Life: Its Spirit, Conditions, Method. Along these lines my assistant found these helpful articles on recent studies that link taking walks and creativity and mental health. . + Stanford Study “The study found that walking indoors or outdoors similarly boosted creative inspiration.

“The creative output increased by an average of 60 percent when the person was walking, according to the study.” + Think on Your Feet (repeats a lot of the info in the first article) + And a couple of entries from the dynamicrunningtherapy blog: Think on your feet: Walking boosts creativity. Forget the old adage that the best way to solve a problem is to "sleep on it. 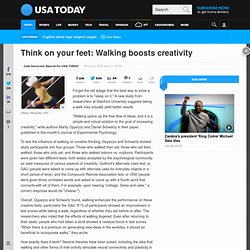 " A new study from researchers at Stanford University suggests taking a walk may actually yield better results. "Walking opens up the free flow of ideas, and it is a simple and robust solution to the goal of increasing creativity," write authors Marily Oppezzo and Daniel Schwartz in their paper, published in this month's Journal of Experimental Psychology. To test the influence of walking on creative thinking, Oppezzo and Schwartz divided study participants into four groups: Those who walked then sat; those who sat then walked; those who only sat; and those who walked indoors vs. outdoors. Overall, Oppezzo and Schwartz found, walking enhanced the performance on these creative tests, particularly the GAU: 81% of participants showed an improvement in test scores while taking a walk, regardless of whether they sat before or after. How exactly does it work? 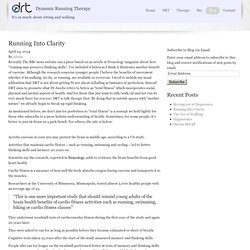 I’ve included it below as I think it illustrates another benefit of exercise. Although the research concerns younger people I believe the benefits of movement whether it be walking, tai chi, or running, are available to everyone. I need to include my usual addendum that DRT is not about getting fit nor about colluding in fantasies of perfection. Instead DRT aims to promote what Dr Jacobs refers to below as “total fitness” which incorporates social, physical and mental aspects of health. And for those that just want to talk/walk/sit and not run its very much there for you too. As mentioned before, we don’t aim for perfection so “total fitness” is a concept we hold lightly for those who subscribe to a more holistic understanding of health. Aerobic exercise in your 20s may protect the brain in middle age, according to a US study. To get creative, get walking. Steve Jobs, the late co-founder of Apple, was known for his walking meetings. 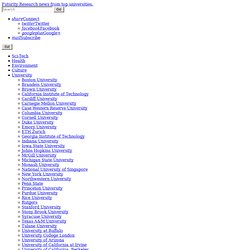 Facebook’s Mark Zuckerberg has also been seen holding meetings on foot. And perhaps you’ve paced back and forth on occasion to drum up ideas. New research seems to back up the impulse. Experiments show that creative thinking improves when a person is walking—indoors or out—and for a time shortly thereafter. It’s the act of walking itself, and not the environment, that is the main factor, researchers say. “Many people anecdotally claim they do their best thinking when walking. Marcher stimule la créativité. «Les grandes pensées naissent en marchant». 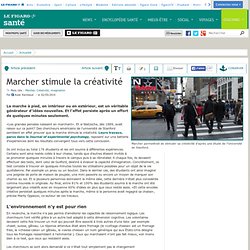 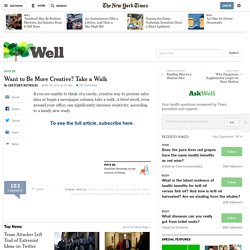 If you are unable to think of a catchy, creative way to present sales data or begin a newspaper column, take a walk. A brief stroll, even around your office, can significantly increase creativity, according to a handy new study. Most of us have heard by now that exercise, including walking, generally improves thinking skills, both immediately and in the longer term. Similarly, exercise has long been linked anecdotally to creativity.

But little science has supported the idea that exercise aids creativity. So researchers at Stanford University recently decided to test that possibility, inspired, in part, by their own strolls. In a creative slump? Take a walk. Want to get creative? 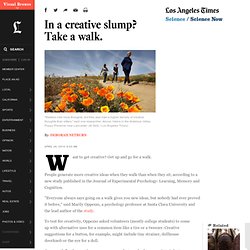 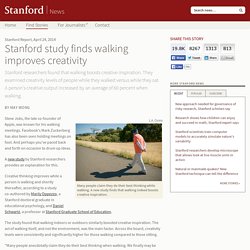 They examined creativity levels of people while they walked versus while they sat. A person's creative output increased by an average of 60 percent when walking. By May Wong L.A. Many people claim they do their best thinking while walking. Creative Walking. Taking a Walk May Lead to More Creativity than Sitting, Study Finds.