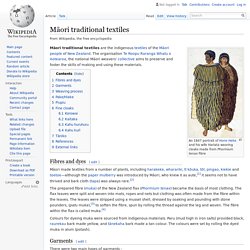 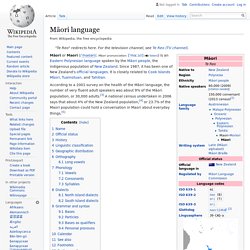 Since 1987, it has been one of New Zealand's official languages. It is closely related to Cook Islands Māori, Tuamotuan, and Tahitian. According to a 2001 survey on the health of the Māori language, the number of very fluent adult speakers was about 9% of the Māori population, or 30,000 adults.[3] A national census undertaken in 2006 says that about 4% of the New Zealand population,[4] or 23.7% of the Maori population could hold a conversation in Maori about everyday things.[5] Name[edit] The English word comes from the Maori language, where it is spelled "Māori". Tiki clock. Population clock. New Zealand's population is estimated to increase by one person every 6 minutes and 45 seconds. 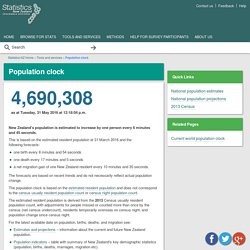 This is based on the estimated resident population at 31 March 2016 and the following forecasts: one birth every 8 minutes and 54 seconds one death every 17 minutes and 5 seconds a net migration gain of one New Zealand resident every 10 minutes and 35 seconds. The forecasts are based on recent trends and do not necessarily reflect actual population change. Clock. The clock is one of the oldest human inventions, meeting the need to consistently measure intervals of time shorter than the natural units: the day, the lunar month, and the year. 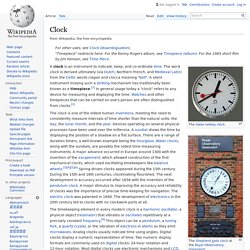 Devices operating on several physical processes have been used over the millennia. A sundial shows the time by displaying the position of a shadow on a flat surface. There are a range of duration timers, a well-known example being the hourglass. Clock Facts, information, pictures. CLOCK AND WATCH INDUSTRY. 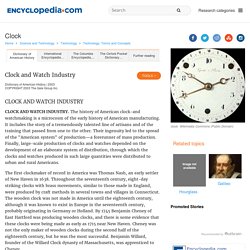 The history of American clock-and watchmaking is a microcosm of the early history of American manufacturing. It includes the story of a tremendously talented line of artisans and of the training that passed from one to the other. Facts About Clocks : Clock Facts & Clocks Facts. History of Clocks. By Mary Bellis Updated February 01, 2016. 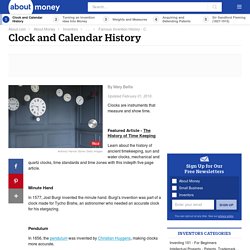 Clocks are instruments that measure and show time. Featured Article - The History of Time Keeping. Facts About Clocks. Clocks are a common part of our everyday lives, but they are also complex and precise machines that are quite interesting for many reasons. 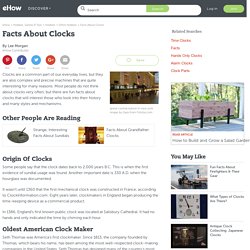 Most people do not think about clocks very often, but there are fun facts about clocks that will interest those who look into their history and many styles and mechanisms. Origin Of Clocks Some people say that the clock dates back to 2,000 years B.C. This is when the first evidence of sundial usage was found. Interesting Facts About Clocks. The management of time by mechanical means comes from the invention of the clock during medieval times in monasteries in European countries. 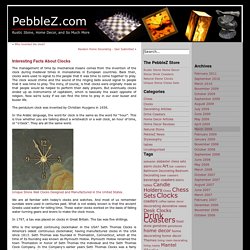 Back then, clocks were used to signal to the people that it was time to come together to pray. The clock would chime and the sound of the ringing bells would signal to people that it was time to pray. The irony, of course, is that clocks were originally made so that people would be helped to perform their daily prayers. Water clock. A display of two outflow water clocks from the Ancient Agora Museum in Athens. 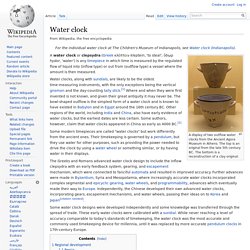 The top is an original from the late 5th century BC. The bottom is a reconstruction of a clay original. A water clock or clepsydra (Greek κλέπτειν kleptein, 'to steal'; ὕδωρ hydor, 'water') is any timepiece in which time is measured by the regulated flow of liquid into (inflow type) or out from (outflow type) a vessel where the amount is then measured.

The History of Sun Clocks and Water Clocks - Obelisks. Not until somewhat recently (that is, in terms of human history) did people find a need for knowing the time of day. 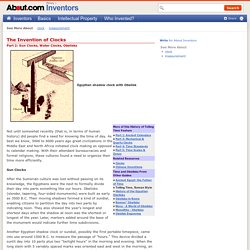 As best we know, 5000 to 6000 years ago great civilizations in the Middle East and North Africa initiated clock making as opposed to calendar making. With their attendant bureaucracies and formal religions, these cultures found a need to organize their time more efficiently. Sun Clocks. Facts About Grandfather Clocks. The grandfather clock is perhaps one of the most stately and magnificent clocks ever created.

Standing over 6 feet tall and encased in fine wood, it adds elegance to any decor. With a rich history, this clock is a phenomenal timekeeper and has many tales to tell. Promoted by The First of Many Timekeeping is as old as time itself.