Zooming Around on a Custom Moto 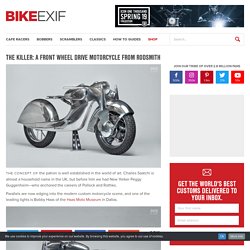 Charles Saatchi is almost a household name in the UK, but before him we had New Yorker Peggy Guggenheim—who anchored the careers of Pollock and Rothko. Parallels are now edging into the modern custom motorcycle scene, and one of the leading lights is Bobby Haas of the Haas Moto Museum in Dallas. Bobby has built up a collection of 130-plus extraordinary motorcycles, and occasionally commissions them too. Hazan is one of his protégés; Craig Rodsmith is another, and his incredible front wheel drive motorcycle is the latest resident of the hallowed halls. It’s a classic story of patron and artist working in tandem, and begins when Bobby was suffering from a bout of insomnia while visiting the Handbuilt Show in Austin, Texas last year. “After a sleepless night, I started surfing the net,” he tells us. 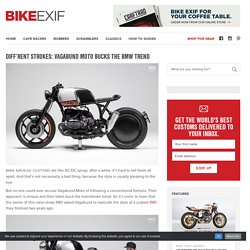 And that’s not necessarily a bad thing, because the style is usually pleasing to the eye. But no one could ever accuse Vagabund Moto of following a conventional formula. Their approach is unique and their bikes buck the mainstream trend. So it’s ironic to learn that the owner of this razor-sharp R80 asked Vagabund to replicate the style of a custom R80 they finished two years ago. Not surprisingly, builders Paul Brauchart and Philipp Rabl weren’t keen on the idea. Paul and Philipp do their wrenching in a workshop in Graz, Austria, and do as much work as possible themselves.

The pair started out with a relatively fresh classic tourer: a 1992 R80 RT with only 25,000 km on the dial. “We took apart the engine and carbs, checked everything, and replaced the not so good parts. Just behind it is a svelte new perch. The handlebars are from LSL, and have been trimmed down. Untitled. A smokin' XSR700 tribute to the FZR750 ‘Gauloises’ racer. Epic 80s endurance racers and over-the-top sprint bikes both get our motors running here at EXIF. 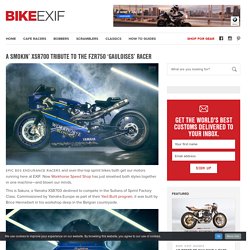 Now Workhorse Speed Shop has just smashed both styles together in one machine—and blown our minds. This is Sakura, a Yamaha XSR700 destined to compete in the Sultans of Sprint Factory Class. Commissioned by Yamaha Europe as part of their Yard Built program, it was built by Brice Hennebert in his workshop deep in the Belgian countryside. Evolution of the Species: Hookie Co.'s ‘Wolf’ Honda CB750. Hookie Co. are one of the most exciting new custom shops to have emerged in recent times. 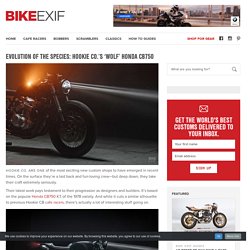 On the surface they’re a laid back and fun-loving crew—but deep down, they take their craft extremely seriously. Their latest work pays testament to their progression as designers and builders. It’s based on the popular Honda CB750 K7, of the 1978 variety. And while it cuts a similar silhouette to previous Hookie CB cafe racers, there’s actually a lot of interesting stuff going on. “This is a project that has been waiting on the ‘need to build’ list for almost too long,” says Hookie founder, Nico. The Right Stuff: A Triumph Thruxton R from deBolex. Calum Pryce-Tidd is one of the most methodical and thoughtful bike builders operating in Europe today. 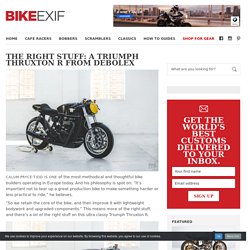 And his philosophy is spot on: “It’s important not to tear up a great production bike to make something harder or less practical to ride,” he believes. “So we retain the core of the bike, and then improve it with lightweight bodywork and upgraded components.” This means more of the right stuff, and there’s a lot of the right stuff on this ultra classy Triumph Thruxton R.

Builds from deBolex hark back to the classic era of vehicle design, which Calum describes as “a combination of effortless style and a fundamental quality.” The approach is akin to traditional coach building or race car engineering. “Our build process is similar to that of the 50s and 60s racing eras,” he says. This Thruxton R was a no-compromise build, commissioned by Prince Mateen of Brunei. Krugger hardtails the Triumph Bonneville Bobber. Fred ‘Krugger’ Bertrand has a specialty: winning world championships. 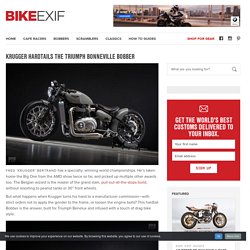 He’s taken home the Big One from the AMD show twice so far, and picked up multiple other awards too. The Belgian wizard is the master of the grand slam, pull-out-all-the-stops build, without resorting to peanut tanks or 30” front wheels. But what happens when Krugger turns his hand to a manufacturer commission—with strict orders not to apply the grinder to the frame, or loosen the engine bolts? This hardtail Bobber is the answer, built for Triumph Benelux and infused with a touch of drag bike style. Clean, simple, elegant and fast, the bmw r80 'thirteen' is lucky for one. Z1 Beater! A Honda CB400F Tuned for the Track. The US show circuit is booming. 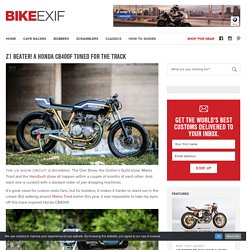 The One Show, the Outlier’s Guild show, Mama Tried and the Handbuilt show all happen within a couple of months of each other. And each one is curated with a stacked roster of jaw-dropping machines. It’s great news for custom moto fans, but for builders, it makes it harder to stand out in the crowd. But walking around Mama Tried earlier this year, it was impossible to take my eyes off this track-inspired Honda CB400F. It’s the work of Shawn Smith, and the first build out of his part-time shop, Innovative Motosports in Ankeny, Iowa. Skate or Die: A Triumph Thruxton With A Street Art Vibe. As someone who spent his teen years with a skateboard under his feet, I see parallels between the skate and custom bike worlds. 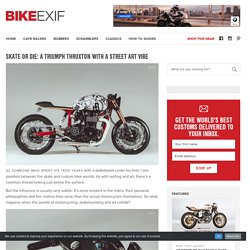 As with surfing and art, there’s a common thread lurking just below the surface. But the influence is usually very subtle. Hot Rod Alice: A Honda CB750K ten years in the making. Custom builders often cringe at the sight of their first project. 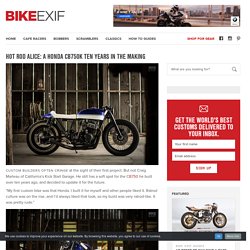 But not Craig Marleau of California’s Kick Start Garage. He still has a soft spot for the CB750 he built over ten years ago, and decided to update it for the future. “My first custom bike was that Honda. Custom Bikes Of The Week: 18 March, 2018. A sinister Yamaha XJR1300, a smokin’ hot RD350, a Honda CX500 with R6 suspension, and an 80s-style Hayabusa rocketship. 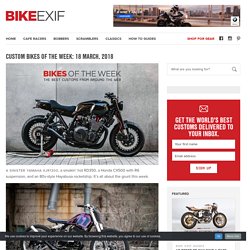 It’s all about the grunt this week. Yamaha RD350 by Jake Drummond Working from drawings that he’d penned about a year earlier, 24-year-old Jake Drummond wanted a custom that dipped toes in both the board tracker and mountain bike ponds. After two years of labor and learning on the fly, he’s done more than succeed with his Yamaha RD350. Jake didn’t even know how to weld properly when things got underway, so instead of blasting towards a finish line, he took his time. Barely anything, aside from the engine cradle has been left stock. Above The Curve: A Swedish KZ650 shaped to perfection. When it comes to iconic 1970s middleweights, the Honda CB750 steals all the limelight.

But Kawasaki’s KZ650 was also hugely popular—and easily capable of keeping up with contemporary 750s. “Right out of the crate, it will out-perform any 750 in the world,” said Kawasaki’s advertising at the time, and the claim had merit. The little brother of the Z1 was fast and nimble, and was less than a second behind big brother on the quarter mile. It’s not hard to find a used KZ650 these days (or Z650, as it was known outside the USA), and Swedish builder Fredrik Pål Persson is a fan. Fredrik ditched a promising career as a chef to set up PAAL Motorcycles in the city of Malmö, and with three guys helping him, he’s cooked up 19 very tasty customs so far.

Building a Sportster Iron 1200 with five total strangers. Harley-Davidson has just launched two new Sportsters: the Iron 1200 and the Forty-Eight Special. Both have throwback styling and graphics to commemorate the Motor Company’s 115th anniversary, but don’t offer anything mechanically different. We’re betting that there’s a completely new Sportster model in the Milwaukee engineering pipeline right now.

But we’ve also had 14 years to appreciate the current Sportster’s strength: it’s been customized in so many ways, there’s a ton of parts—and inspiration—out there. Which was the premise for one of the strangest gigs I’ve ever attended as a moto journalist. Harley-Davidson know this well. My team was given the new Iron 1200 to customize. Genius At Work: A sharp Honda GL400 from Wedge. It takes true talent to turn a Honda CX500 into something pretty. And Takashi Nihira of Wedge Motorcycle sure is talented: remember his radical reworking of BMW’s little G 310 R?

Okay, this latest build from Wedge is not technically a CX. (Some) Assembly Required: BAAK's easy-build BMW R nineT. There are a handful of modern motorcycles that really lend themselves to customization. And if you pick the right one, you might not even have to get your hands that dirty. And that’s fair enough. Although we all swoon at the fabrication skills of rock star bike builders, not everyone has the ability or desire to create a ‘stack of dimes’ weld. Owners of bikes like the Harley-Davidson Sportster and Triumph Bonneville have always been spoilt for choice when it comes to bolt-on modifications. Arch Method 143 Motorcycle. In case you aren’t up on your Keanu Reeves whereabouts, he can now be found building motorcycles and remaining awesome. The latest bike to roll out of Arch Motorcycles, the shop he started with designer Gard Hollinger, looks like it was pulled straight from the set of John Wick. The Method 143 sports a carbon fiber mono-cell chassis that’s accented with fine leather.

Limited to only 23 units, the bike is packed with a 2,343cc fuel-injected V-twin engine, carbon fiber “Turbine” wheels that Arch designed, a proprietary LED headlight design, a mobile phone instrumentation display, and more fine touches. Should Royal Enfield Build a Classic 500 Bobber? This Board Tracker is Powered by A Lawnmower Engine. Harley-Davidson isn’t the only manufacturer with roots in Milwaukee. Briggs & Stratton—known for their lawnmower motors—were founded in the Midwestern city too, just five years after The Motor Company.

That makes them a century old. And what better way to celebrate, than with a hand-made board tracker sporting a hot-rodded Briggs & Stratton power plant? Autobahn Streak: JSK takes on the BMW R nineT. Titan motorcycles customizes honda CB350 as racer from the 1950s. Second Chance: Revival resurrects the BMW R1200S. When the R1200S landed in showrooms in 2006, it was the most powerful production boxer that BMW had ever made. Performance was rapid, with 122 horsepower and a claimed dry weight of just under 400 pounds. This CB750 took three years to build—and it's perfect. As soon as we laid eyes on this Honda CB cafe racer, we knew there was more to it than meets the eye. Redux: Eastern Spirit revisits the Suzuki GS550. If you’ve been reading these pages for a few years now, you might recognize Eastern Spirit Garage from Poland.

Indeed, we’ve only come across it once before, on Mark Atkinson’s breathtaking BMW Alpha landspeeder. Rosso Corsa: A Honda Cafe Racer Inspired by a Ferrari. Looking for a motorcycle to complement your classic Ferrari? Most guys would opt for something that’s also Italian and red—like a Ducati. Smooth Operator: Vagabund's sleek BMW R100R. Blast From the Past: Storik's Triumph cafe racer 'Rafale' The Never-Ending Story: Building a Yamaha TR1 drag bike. Devil in Disguise: Krugger reworks the Ducati Diavel. The real deal: A stealthy CB550 cafe racer from Hookie Co. The Deus Sea Sider: A C70 Super Cub for surfers.