Humanity Surprised It Still Hasn’t Figured Out Better Alternative To Letting Power-Hungry Assholes Decide Everything. NEW YORK—Noting that it has had thousands of years to develop a more agreeable option, humankind expressed bewilderment this week that it has yet to devise a better alternative to governing itself than always letting power-hungry assholes run everything, sources worldwide reported. 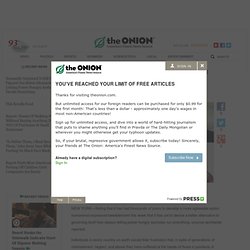 Nation Wondering Why Struggling Mental Health System Can’t Just Pull Itself Together. WASHINGTON—Saying that things are only going to keep getting worse unless it’s willing to step up and make some changes, millions of frustrated Americans wondered this week why the nation’s struggling mental health system couldn’t just snap out of its funk and pull itself together. 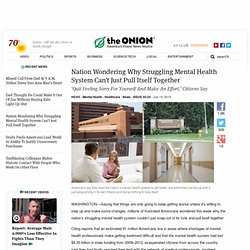 Citing reports that an estimated 91 million Americans live in areas where shortages of mental health professionals make getting treatment difficult and that the mental health system had lost $4.35 billion in state funding from 2009–2012, exasperated citizens from across the country said they had finally reached their limit with the network of medical professionals, inpatient facilities, and long-term treatment programs that apparently lacked the willpower to improve its situation. Bride Defends Decision To Attach Baby To Wedding Dress And Drag Her Down The Aisle. Every bride dreams of a wedding dress that turns heads. 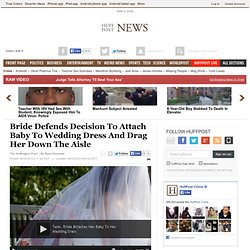 Hopefully that's due to the beauty of the dress, however, and not because of the infant being dragged behind it. That's the controversial tactic of recent bride Shona Carter-Brooks, who, WREG reports, attached her 1-month-old to the train of her wedding dress in an effort to incorporate her daughter into the ceremony.

(Story continues below) After images of the baby attached to her dress began to circulate online, the Tennessee bride defended her decision in a Facebook post on May 28. Woman Hears For The First Time In Her Life, And Her Reaction Is Pure Magic. "Monday, Tuesday, Wednesday, Thursday, Friday. 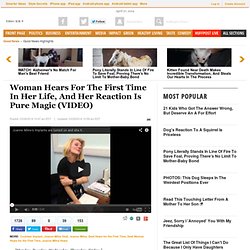 " The days of the week have never sounded quite so good. In the video above, Joanne Milne, a 39-year-old woman from Gateshead, England, hears for the very first time after her cochlear implants are switched on. Milne, who was born deaf and is registered blind, becomes completely overwhelmed with emotion as the nurse recites the days of the week.

The Hardest Part Of Sobriety Is Waking Up Having To Remember The Transsexual You Accidentally Banged. 'Pedo Baiting' On Love + Radio. Disinfo readers may be interested in this episode of WBEZ Chicago’s Love + Radio podcast. 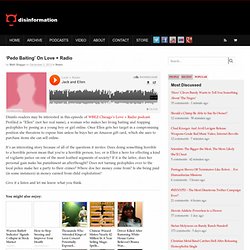 Homophobia hoax? Bullying note to waitress went viral, but it might be fake. How much outrage can one story about a little restaurant receipt inspire? 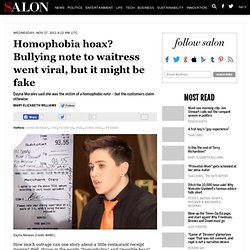 Well, throw in the words “homophobia” and “possible hoax” and let’s find out. Delta Passenger Baraka Kanaan Forced To Crawl Down Aisle, Across Tarmac To Wheelchair: Complaint. A Hawaii man says Delta Air Lines forced him to crawl down the aisle of its planes and across the tarmac to reach his wheelchair several times during a trip in July 2012, according to a lawsuit filed in federal court Tuesday. 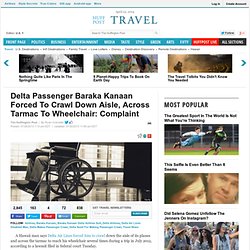 Baraka Kanaan, a nonprofit head and former philosophy professor, says one of the incidents happened last summer when he was en route to Massachusetts from Hawaii via a series of Delta Air Lines flights. Though a car accident in 2000 left him unable to walk and entirely dependent on a wheelchair, aisle chairs, and lifts, he says Delta representatives assured him weeks before his flight "that he would be received and given reasonable accommodation for his disability. " Eyeball Licking Sex Craze Sweeps Japan. Eyeball-licking fetishism, also known as “oculolinctus” or “worming”, has become a popular way of expressing affection or inciting sexual arousal in Japan. 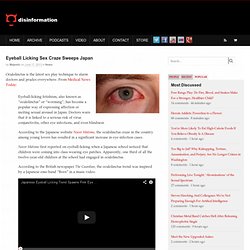 Doctors warn that it is linked to a serious risk of virus conjunctivitis, other eye infections, and even blindnessAccording to the Japanese website Naver Matome, the oculolinctus craze in the country among young lovers has resulted in a significant increase in eye-infection cases.Naver Matome first reported on eyeball-licking when a Japanese school noticed that children were coming into class wearing eye patches. Are you happier than other Grist readers? Take this survey to find out. Editor’s note: We’re encouraging Grist readers to take the Gross National Happiness survey, a project of The Happiness Initiative. 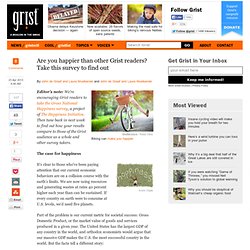 Then tune back in next week to find out how your results compare to those of the Grist audience as a whole and other survey takers. The case for happiness It’s clear to those who’ve been paying attention that our current economic behaviors are on a collision course with the earth’s limits. We are now using resources and generating wastes at rates 40 percent higher each year than can be sustained. If every country on earth were to consume at U.S. levels, we’d need five planets. Part of the problem is our current metric for societal success: Gross Domestic Product, or the market value of goods and services produced in a given year. Yet sadly, the American economic model is becoming more dominant, even in Europe. 125 Amazing Animal Photobombs (PHOTOS) At this point, it's pretty clear that animals are by far the best photobombers out there (for proof, just check out our Twitter avatar). 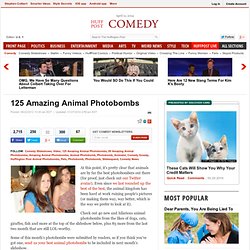